Ireland's has only one pro-slavery Confederate memorial - is it next to fall? 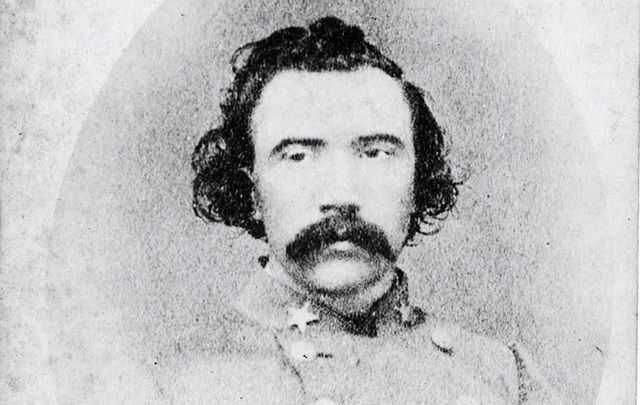 Heralded as a fun-loving, handsome, but quiet leader in both Ireland and the US, Irish immigrant Dick Dowling also "rented" slaves. WikiCommons

Richard Dowling, an Irish Confederate hero, "rented" slaves, some not even yet in their teens

There is only one memorial to a Confederate Civil War figure in Ireland, a plaque on the Town Hall in Tuam, County Galway commemorating Richard “Dick” Dowling, a Texas hero for the Confederacy but a man who rented slaves, including one as young as 12, according to records at Rice University. He was a Tuam native.

Dowling and a handful of fellow Irishmen held off a Union invasion of Texas in 1863, forcing 5,000 Union soldiers to retreat at Sabine Pass where their gunboats were destroyed and turned back by Dowling’s tiny force. Jefferson Davis, President of the Confederacy, stated that the Dowling victory was “more remarkable than Thermopylae.” The battle is re-enacted every year.

Dowling became such a hero that he was appointed a major recruiter for the Confederate side for the remainder of the war.

His Irish home town of Tuam in Galway also honored him. Following the massive controversy over Confederate war heroes and statues to honor them, the Irish plaque, which was unveiled in 1998, is bound to come under renewed scrutiny.

Memorials, schools, and streets named after Dowling in Houston have come in for criticism and been renamed

Memorials to Dowling in his adopted city of Houston have already come in for scrutiny following African American objections. One middle school named after Dowling, which now has a 99 percent minority enrollment rate, has already been renamed and a black State Assemblyman led the fight to change the name of Dowling Street, one of the main thoroughfares which runs through an African American community neighborhood.

"The street was named Dowling Street, it was done because black people live there. That is not heritage. That is harassment. I think it's time for that market to go away," stated Rep. Garnet Coleman. In January of this year, the street was renamed Emancipation Avenue.

As documents at Rice University and journalist Nick Esquer in Houstonia Magazine reveal, while there is no direct evidence that Dowling owned slaves, the relevant census records show that he took part in "hiring" the labor of slaves who were legally owned by others. Rice’s archives record that at least three slaves owned by hotel proprietor H. H. Milby, including a twelve-year-old boy, are listed as being in Dowling's temporary employ in the slave schedule of the 1860 census.

The practice of  "hiring out" slaves for a period of time allowed a much wider use of slaves and Dowling clearly took advantage of it for his bar and hotel businesses.

It is worth noting that after the Civil War when slaves were freed, Dowling went into business with “four colored men” on a real estate deal and by all accounts dealt with them fairly.

Despite his pro-slavery past, Irish Americans in Houston still pay tribute to him every year around St.Patrick’s Day, an event attended by members of the Houston St.Patricks Day commission.

“Even though he is remembered for his Confederate service, we feel it’s more about his Irish heritage,” says Jeannie Kearns, treasurer for the commission, which, she stresses, didn’t put together the loosely organized event. “He did a lot of great things at a time when it was really hard for an Irishman, or even an immigrant, to do so.”

Dowling could certainly not have been in any doubt about what he was signing up for when he became part of the Jefferson Davis Guard fighting for the Confederacy.

The Texas statement of secession and declaration of causes written February 2, 1861, makes clear its citizens wished to then and forever hold slaves in bondage and uphold the institution of slavery.

It reads in part: “Texas abandoned her separate national existence and consented to become one of the Confederated States to promote her welfare, insure domestic tranquility and secure more substantially the blessings of peace and liberty to her people..... She was received as a commonwealth holding, maintaining and protecting the institution known as negro slavery--the servitude of the African to the white race within her limits--a relation that had existed from the first settlement of her wilderness by the white race, and which her people intended should exist in all future time. “

Dowling was born in the townland of Knock, near Tuam on January 14, 1837. His parents were small farmers but when the Famine hit they were wiped off the land. They sent Dowling to America in 1846, aged just nine. He sailed from Cobh to New Orleans where his parents eventually joined him but they were struck by yellow fever and died.

Soon after, 19-year-old Dowling left for Houston and the expanding territory of Texas in 1857. The town only had 4,000 residents then and the tall, red-haired, and handsome Dowling soon became a well-known bar and restaurant owner.

When the civil war broke out, he signed up immediately and won fame and renown at the Battle of Sabine Pass. After his victory there, an Irish prisoner on the Union side is said to have been amazed at his youth and daring and asked him, “Are you the shagraun (lad) who did all the mischief? ”

He was close to Confederate top brass and was photographed with General James Longstreet, a key figure on the Rebel side.

After the war, he dabbled in business, becoming state leader of the Irish Fenian movement before he died young of yellow fever in 1867.

Now 150 years later, his legacy is at stake as pro-Confederate groups battle to keep his memorials in Houston. It is a battle that seems sure extend to Ireland.

Should the Richard Dowling plaque in Tuam, Co. Galway be removed? Leave us your opinions in the comments section, below.