Do the Republicans have a Covid death wish?

As numbers of infections soar in the great southern bastions of GOP power, the death wish has led to an extraordinary scenario where leaders like Governor Ron DeSantis in Florida and Greg Abbott of Texas are openly gambling with people’s lives, 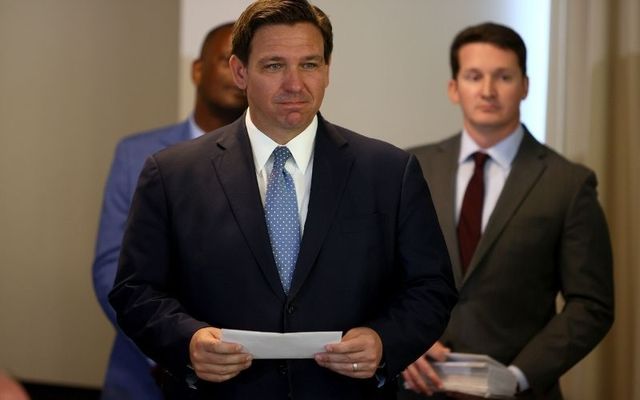 “GIVE me liberty or give me death” Revolutionary War hero Patrick Henry intoned on March 20, 1775, as the great war for America’s freedom began.

The battle cry has reverberated through history, becoming the siren song of this nation.

But now something curious has happened. Republicans all around the country have come up with a mangled version of Henry’s magnificent call to arms.

Given that about 90 percent of those refusing to be vaccinated are Republicans the new motto might well be “Don’t give me masks or vaccines, give me death...and screw your social distance.”

As numbers of infections soar in the great southern bastions of GOP power, states like Florida, Texas, and Alabama to name but three, the death wish has led to an extraordinary scenario where leaders like Governor Ron DeSantis in Florida and Greg Abbott of Texas are openly gambling with people’s lives, both young and old, by insisting on the right to do as little as possible to help citizens of their states in their hour of need.

It seems it is all about the political calculation. DeSantis, Abbott, and other Trumpnaughts are making a calculation that their political careers are better helped by posturing and wallowing in their macho madness while people die all around them.

There is no other conclusion to make when you listen to what they say. Here is Abbott: “Going forward, in Texas, there will not be any government-imposed shutdowns or mask mandates.  Everyone already knows what to do.”

In other words, ignore the bully pulpit's power to do good in his position. Throw suspicion and paranoia of masks and social distancing into the mix and let the fine people of Texas make their own way to the charnel house.

DeSantis goes a step further.  Perhaps it's too much exposure to the current Florida midsummer heat, but DeSantis sounds like a  Looney Tunes character in his latest pronouncement.

“We can either have a free society, or we can have a biomedical security state,” DeSantis said last week.  “And I can tell you, Florida, we’re a free state. People are going to be free to choose to make their own decisions.”

A biomedical security state? WTF is that? I think it means that it is a good thing that no public health advice should be allowed of followed.

The politicians instead will handle it. It’s a lot like asking a plumber his opinion on the third law of thermodynamics.

Politicians entangling themselves in public health policy ends up a disaster for politics, people, and public health.

It took Alabama Governor Kay Ivey to make the most obvious retort to the Texas and Florida wheeze.

Plain and simple truth. The killer virus was a horrific invader, and incredibly science showed up with both preventive steps and actual vaccines to tackle it.

What should have been an extraordinary victory is once again in the melting pot because of the mindless opposition to taking the injection and saving your life.

When the history of this period is written the role of snake oil salesmen like DeSantis and Abbott will be evident. They will have blood on their hands because they knew perfectly well the use of the vaccine was the only way out, and the anti-vaxxers were from Mars.

Yet they choose to garnish their own political careers based on yet another big lie.

Judging by their plunging popularity, they can’t fool all the people all the time but they surely have done great damage trying.