Tough talk on The Donald by leading Irish American politician. 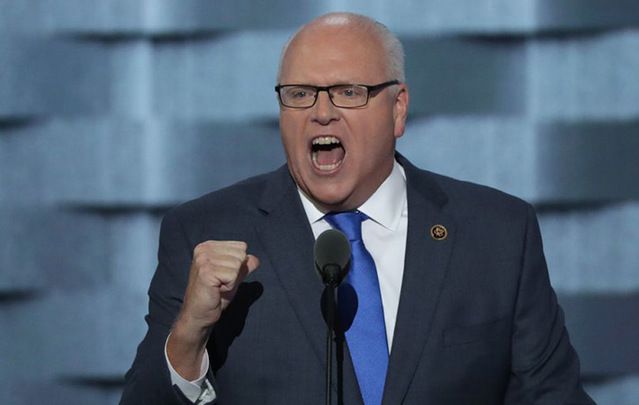 Congressman Joe Crowley became an unlikely star on the second night of the Democratic convention in Philadelphia.

Essentially, Crowley, who represents Queens, NY accused Trump of profiting from 9/11 by claiming $150,000 in federal funds earmarked for small businesses which were badly impacted.

"Donald Trump saw 9/11 as a payday for his empire, collecting 150k,” Crowley said to thunderous applause.

Crowley was telling the truth, according to an article in the Weekly Standard, a conservative journal that opposes Trump.

“In 2005, Trump valued 40 Wall Street at $400 million, and the Trump Organization describes the building as an "impressive, landmark property." And as Trump said immediately following 9/11, none of his properties were directly damaged by the attack on the World Trade Center. But through a loophole in the rules, Trump was able to squeeze $150,000 of money from taxpayers for his valuable landmark property.”

Crowley also pointed out that Trump’s voice was silent despite being one of the most prominent New Yorkers in the effort to have funds routed to New York as soon as possible.

Trump was nowhere to be seen or heard on or after 9/11 said Crowley, a far cry from Trump’s usual overwhelming presence.

The Irish American Queens congressman, who is number four in the Democratic House leadership, did his prospects of someday becoming speaker no harm with a devastating attack on Donald Trump.

He stated: “Where was Donald Trump in the days, and months, and years after 9/11? He didn’t stand at the pile. He didn’t lobby Congress for help. He didn’t fight for the first responders. Nope. He cashed in - collecting $150,000 in federal funds intended to help small businesses recover – even though days after the attack Trump said his properties were not affected.

"Hillary sought these funds to help local mom and pop shops get back on their feet. Donald Trump sought a payday for his empire.”

It was one of our nation’s darkest days, but to Trump, it was just another chance to make a quick buck.”

Trump as war profiteer is certainly a devastating angle and one that will surely feature prominently as Trump has given a very different account of his actions after 9/11.

Crowley certainly has the credibility on 9/11. He talked about being alerted on a plane on the runway in New York that two planes had hit the World Trade Center.

He immediately worried about his two cousins, two New York firefighters, both of whom were off duty but who had raced down to the WTC to help their overwhelmed colleagues.

Crowley led the fight for federal funds for New York and funding for medical care for the many first responders who suffered dreadful complications from inhaling toxic fumes.

When Crowley talks about 9/11 he does so with authority and personal experience. He may also have opened a new and major line of inquiry into Donald Trump’s business practices and his version of the truth.