How bad is racism in the United States? What Trump unleashed

Is there racism in America? Is the Pope a Catholic? Obviously, the answer to both questions is yes. 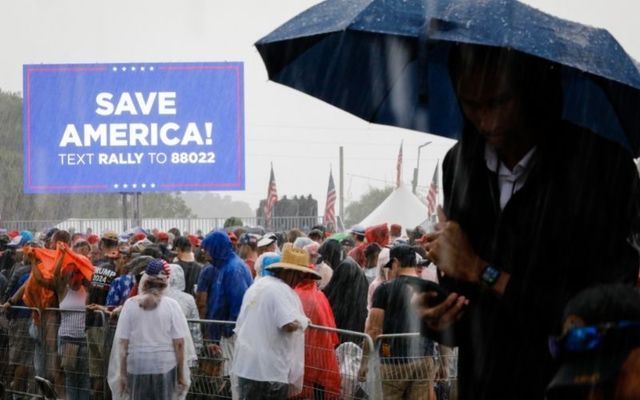 Trump supporters gather at a rally in Florida. Getty

There was a lid on racism until Donald Trump, the man who set Americans off against one another. By refusing to condemn the racist Proud Boys he gave license to every hick and huckster to no longer hide their prejudice.

That is what the Nazis did. They created a common enemy, “Der Juden,” and soon even the established churches were slamming them too.

The Southern Law Poverty Center states there are now 800 white supremacist groups in North America, many of them emboldened by Trump and even more extreme in their views.

In the modern era, social media hate groups have exploded in number and there is no sign of this trend lessening. At the core is a long-simmering grievance, aired by Fox News and its acolytes, that the white man has lost out to minorities in modern-day America.

On the other side is a move to neutralize and cancel anyone and everyone who even dares to question liberal groupthink on perceived racism which has resulted in ridiculous academic fiats.

In the new era people who use terms like “picnic” and “pow-wow” are guilty of racism according to a recent report issued by a group of Brandeis University students, (picnic because during lynchings white followers often held picnics.). We have arrived at a bad place.

I lived in London for a time in the late 1970s and encountered blatant anti-Irish racism. Comedians on television blurted out the most vile anti-Irish bile -- we were thick, we were ugly, we were lazy and partly illiterate.

The top-rated comedian at the time was Frank Carson. Here are just two jokes he told in a row: An Irishman's wife gave birth to twins. Her husband wanted to know who the other father was.

There were two Irishmen eating sandwiches in a pub and the landlord said: "You can't eat your own food here."  So they swapped sandwiches.

Ha ha, stupid Paddy. Wouldn’t you know Carson was Irish from Belfast? He got very wealthy defiling his own.

He was a bit like those pathetic African Americans on Fox News who are lapdogs for the hosts who think, “Look we can’t be racist, we have black people on our show.”

Back to Britain. In 2009 a prison publication devoted itself to Irish jokes. A well-known Irish joker defended them.

As The Irish Times reported, “Professor Des McHale of University College Cork, author of The Official Kerryman Jokebook, among others, says the controversy is misguided and nothing to do with racism or negative cultural stereotyping. He believes those objecting should lighten up.

“’Look, these jokes have been doing the rounds for years. It’s folk humor rather than jokes. It’s crazy that people are objecting to it. The Irish have been in England for 500 years and you would think we would have developed a thick skin by now.’”

But the Irish Times writer Brian O’Connell asked a pertinent question. “Had the Muslim or black population in the prison been subjected to the same type of humor, though, would those jokes have been culturally acceptable?”

The point is each generation has its scapegoats. The Irish in England are no longer the butt of jokes but more recent arrivals are.

Racism will always be with us. The Irish should remember we once were targets. Now it is others.

The answer to the question in the headline is that not all Americans are racist, but some certainly are.