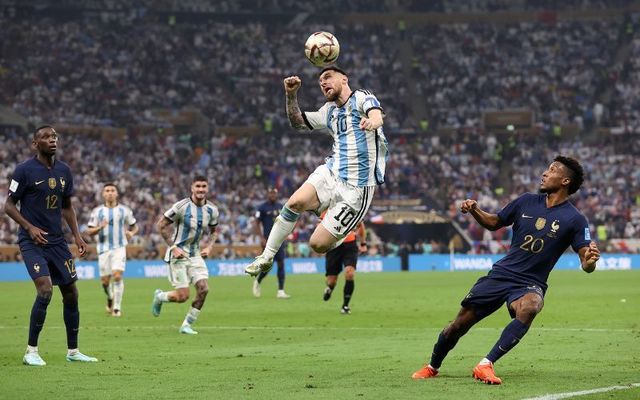 December 18, 2022: Lionel Messi of Argentina controls the ball on his head during the FIFA World Cup Qatar 2022 Final match between Argentina and France at Lusail Stadium in Lusail City, Qatar. Getty Images

Sometimes, but not very often, we witness a great moment from an individual who has no peer, who accomplishes something so wonderful that we believe in magic and wishing wells all over again.

The nature of the deed is such that the person’s name will reverberate as long as history is written.

Such a person was Lionel Messi at the World Cup final on Sunday. The captain of Argentina arrived in Qatar as an aging gunslinger with just one more chance to capture the greatest prize in sport.

Few thought he could do it. Messi is 35 and had missed his chance against Germany in a World Cup final in 2014. Many believed his skills, especially his blinding speed, had slowed.

But sometimes a great notion takes hold. Messi kept his own dream very close to his heart and alive. In the end, he took our Irish Nobel poet Seamus Heaney’s advice to his fellow man, which was to “walk on air against your better judgment.”

Messi didn’t just walk. He seemed to float endlessly, gliding around the field and showing off every one of his magic tricks.

You suddenly realized you were looking at the best ever. Even Pele, the greatest soccer legend, said it was an amazing spectacle.

The only remotely similar feat that I can conjure up is Tom Brady winning the Super Bowl at age 43, playing against opponents who were not even born when he began playing professional football.

Argentina snatched victory from the jaws of defeat, the final whistle on Sunday a crowning event with an estimated 1.5 billion people watching worldwide. At such moments are legends born.

Hollywood would surely have turned down the script: “Once upon a time, there was a young man so small and light that his nickname was the flea, that he needed growth hormones to reach five feet seven inches. Despite all that he went on to become the greatest footballer on earth, ending his international career in operatic fashion by leading his country to victory in the World Cup sports biggest single occasion.”

Messi’s victory was the equivalent of watching Secretariat at his height, listening to Mozart for the first time, watching Muhammad Ali box at his best.

It also gave us one of those granular moments, as fleeting as life itself. We can’t quite believe what we witnessed. It takes time to absorb, to accept what we have just seen.

With just ten minutes to go in the final, Argentina were sitting on a two-goal lead and cruising. But they had fallen back on defense, a move that almost cost them the game in an earlier round against the Netherlands, which took them to a penalty shoot-out despite sitting comfortably on a two-goal lead.

On Sunday it looked like it was about to happen again. The cardiac kids from Argentina slowed the match to a walk, a far cry from their quick step in the first half forcing errors by their French opponents.

After a sensational French comeback, they were the hunted, not the hunters. But the blue and white line held.

And so to penalty kicks. Messi rolled his ball into the net as calm as ever. A few moments later, Argentina were champions.

And Messi was a new God to millions of football players around the world. What a game!