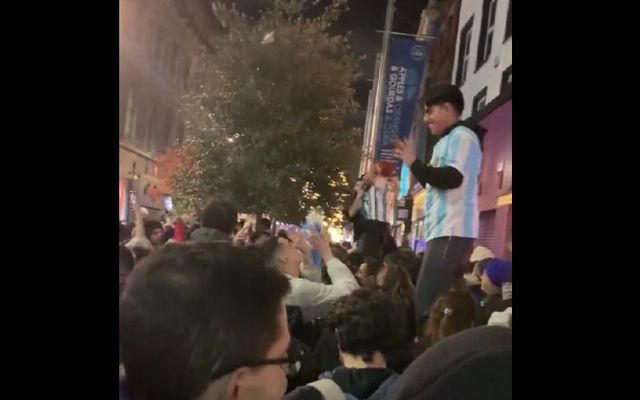 Argentina prevailed 4-2 in a penalty shootout in the showpiece event at the Lusail Stadium after a pulsating game had finished 3-3 after extra time, with Lionel Messi scoring twice and France's Kylian Mbappe becoming only the second player to score a hattrick in a World Cup final.

RTÉ reporter Cian McCormack shared this clip of the scene in Dublin's Woolshed Bar during the final moments of the thrilling match:

There won’t be a cow milked in Argentina tonight? Reaction ⁦@woolshedbaa⁩ from fans in Dublin. Tomorrow I’ll talk to them on ⁦@morningireland⁩ ⁦@rtenews⁩ ⁦@RTERadio1⁩ pic.twitter.com/FLLuYtsXM7

Hundreds of fans gathered around the Spire, chanting and dancing as car horns blared.

Elsewhere, a village in north Dublin was converted into "Little Argentina" for the World Cup final as distant relatives of Argentina midfielder Alexis Mac Allister gathered to cheer on Argentina.

The 23-year-old midfielder, who assisted Angel Di Maria's goal in Sunday's final, has roots in Donabate in Co Dublin and caught the attention of Irish viewers with his red hair and Irish-sounding name.

His distant cousin Noel Mac Allister, 79, told the Irish Independent that he hopes the midfielder will visit his ancestral homeland at some point in the future.

"I just want Alexis to come to Donabate now and it would be great if he brought the World Cup with him," Noel said.

"I’ve never seen a match like it in my life and to know Alexis helped Argentina win this World Cup final, is just incredible," Noel said.

"I’m delighted. To be here for this with my family is really special. He’s a great player and this is a great team."

Meanwhile, eagle-eyed viewers were quick to spot a strange jersey among the countless blue and white Argentina jerseys at the Lusail Stadium on Sunday.

One fan was spotted wearing a Dublin GAA jersey with a striped blue and white pattern to match Argentina's iconic strip.