County Antrim star could have gone Hollywood but the selfless Irishman has spent decades inspiring and supporting his worth causes. 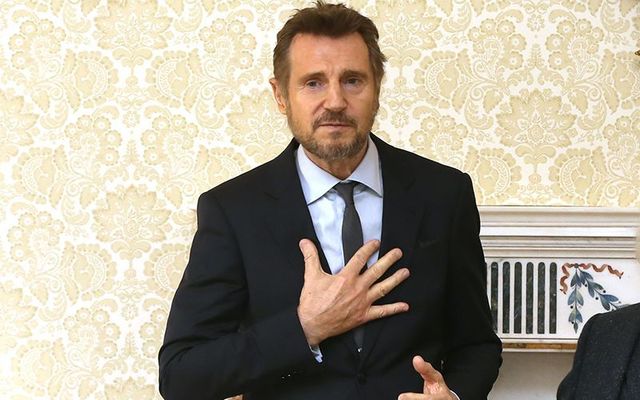 Liam Neeson at the Áras an Uachtaráin, receiving a Presidential Award from Michael D. Higgins. RollingNews

The County Antrim star could have gone Hollywood but the successful star has spent decades inspiring and supporting Irish and other worthy causes. His tale was about learning a lesson from revenge and had nothing to do with racism.

Liam Neeson is the best-known Irishman in America and a credit to his race.

He is most decidedly not a racist. His own hero as he has often told me is an African-American, Muhammad Ali, who gave him his first glimpse of the wide world outside dreary Ballymena, County Antrim, where he grew up and learned to box himself.

Neeson could very easily have gone Hollywood on us decades ago, especially after “Schindler's List” made him a huge star.

Instead, you will find him standing at the back of the room at numerous Irish events, taking no public part but adding his star luster to the event.

The new Irish Arts Center, the $60 million showpiece for the Irish in New York and indeed, around the world, would likely never have gotten off the ground without his dedicated involvement in hosting events, private dinners, and turning up at premieres. The first soil was turned just a few months ago and it will be a beacon for Irish culture, education, community and a home from home for many emigrants, Neeson was an integral part of its creation.

Liam Neeson at the Steve Martin Gala at the Irish Arts Center, in 2017.

Neeson became engaged in the battle to keep horse-drawn carriages in Central Park knowing that scores of Irish and minorities were employed in the carriage business.

The blatant attempt by Mayor de Blasio to ban them so he could turn over the lucrative real estate, where the stables were located, to his real estate backers was foiled in large part by Neeson whose star quality attracted huge media coverage to the protests by the carriage drivers.

He has also lent his name to the American Ireland Fund showing up at their annual dinner in New York and making many public appearances on their behalf. He recently showed up for an event with Baroness May Blood whose work on integrated education in Northern Ireland he warmly embraces.He was also a patron and honoree at the American Irish Historical Society.

It is salutary to note what occurs once he strides into a room. He is usually surrounded by selfie seekers and well-wishers, all wanting a moment with him. He is unfailingly polite and courteous to them, no easy task given the crush of people. Lesser souls might flee for the exit and retreat behind their private zones. He never does.

I vividly recall a recent fundraising event, held at Fitzpatrick’s Grand Central Hotel for a Democratic candidate, Nancy Soderberg, who had done trojan work under President Clinton on the Irish peace process. Neeson was cornered by the resident bore, the type who always drinks too much and gatecrashes almost every Irish event. Somehow, he kept a polite mien and smiled while cornered. It was a lesson in self-discipline.

The point I am making is not once in my time knowing him either in private conversation or the public man have, I ever heard a word or philosophy other than pride in his Irish background, inclusive in his thinking and encouraging to young actors seeking advice.

The issue he was seeking to explore was revenge. As Trevor Noah said on his “The Daily Show” if he had told the story talking to Oprah it would have come across as a wonderful confessional hug it out moment.

I remember 11 years ago at the American Ireland Fund dinner, in May 2007, he was there with his wife the beautiful Natasha Richardson. They were the "It" couple, at the top of their professions, admired by all. A few months later his wife had passed, a victim of a freak skiing accident. The way he handled that disaster both professionally and as a father has won him deep-felt respect.

He became a victim of his own honesty in the furor over the unfortunate comments he made. People have missed the point that a woman was raped, a close friend of his, and she carried the terrible impact of that through her life then died of cancer. The anger over that incident has remained with him and it came out. If the rapist had been Irish, I have no doubt he would have called him an "Irish bas****d." His honesty, not his racism, was what hurt him.

It was good to note that despite the Twitter hysteria the movie audience doesn’t hold it against him as his new film opened with better numbers than expected at almost $11 million. People who think about this episode even for a moment understand what he was trying to say. He was focused on learning a lesson from revenge, not racism.

Do you think there's been a massive overreaction to Liam Neeson's comments? Let us know in the comments section below.