For a time it looked as if Branagh may be an odd man out as the nominations flooded in over the decades, eight in all in various categories.  But none led to an Oscar. 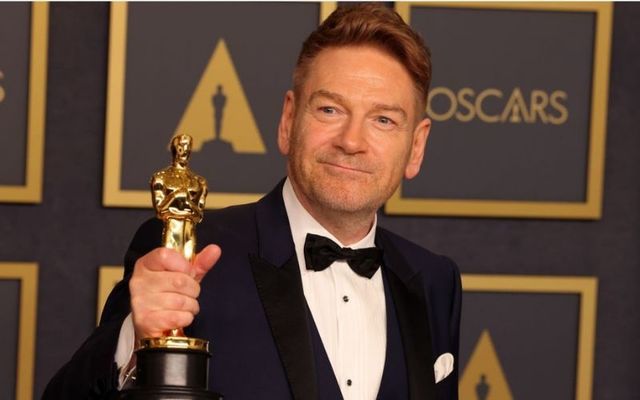 Kenneth Branagh at the Academy Awards on Sunday. Getty

“This story is the search for joy and hope in the face of violence and loss,” Kenneth Branagh said from the stage at the Oscars on Sunday, holding his long-overdue statuette which defines every actor’s career in terms of whether he or she wins one. Branagh’s inspired screenplay for his movie Belfast had finally won the day.

For a time it looked as if Branagh may be an odd man out as the nominations flooded in over the decades, eight in all in various categories.  But none led to an Oscar.

Then Branagh did what great artists can do.  He pulled from somewhere deep inside himself the narrative of his childhood, which in his case was the trauma of growing up in a city about to explode in violence.

He won for his screenplay, mainly autobiographical, about the outbreak of The Troubles in Northern Ireland in 1968 as seen through the eyes of an inventive young child whose life changes forever on one terrible day when his city erupts.

Branagh’s Oscar acceptance comments about the search for hope in the midst of misery were a not-so-subtle reference to Ukraine as well.  For decades Belfast was the most violent city in Europe. Thousands died, a sad reminder of what happens when borders are drawn by an arbitrary line on a map and those who want no part of that state resist it.

Branagh’s family become internal refugees, forced to flee to England when the local troublemakers targeted them.  It is a tale told in Belfast, Sarajevo, Ukraine; the true victims of war are often the least culpable.  We do well to remember that today as millions flee Vladimir Putin, a demented dictator intent on restoring an empire that never was and creating a Greater Russia that will never be.

Branagh brought alive that reality as it pertained to Northern Ireland, but with a typical Hollywood pathos and a happy ending.

Some critics saw his film as overly bland in its depiction of Belfast at the height of The Troubles.  Others, however, saw a well-crafted childhood memoir that exposed what urban warfare really can do to harden hearts and minds.

In the end, Belfast worked in securing Branagh his professional due at last.  It was slightly ironic that the Belfast-born actor, who despite his Irish birth is considered a quintessential British classical actor, won his biggest prize by reprising his brief childhood years spent in Belfast before moving to Britain.

The lack of other Oscars for his film gives testament to the drawback of being fastest out of the gate. Adored at the Toronto International Film Festival and the early frontrunner for the Best Picture Oscar, Belfast inevitably faded as the Oscars date loomed.

Branagh, a Shakespearean actor par excellence, might have quoted the bard who wrote “Uneasy lies the head that wears the crown,” from Shakespeare’s Henry IV.

Indeed, Branagh was not the only Irish-born actor to step on the Oscar stage. Ferdia Walsh-Peelo from Wicklow played Miles, the singing partner, and love interest of Ruby (Emilia Jones) in the Best Picture winner CODA, and he surely has a bright future, but one cannot say the same about the Oscar show itself.

The show was way long with too much virtue signaling.  Too self-important by half, the show was once again bloated and pretty boring, until the now infamous punch was thrown by Will Smith on Chris Rock’s face.

Perhaps that was such a knockout that Oscar organizers may finally fix a format that currently is too wieldy. But we won’t hold our breath!