Irish American Joe Biden is speaking the truth he would beat Trump, impeachment or not, and the polls agree. 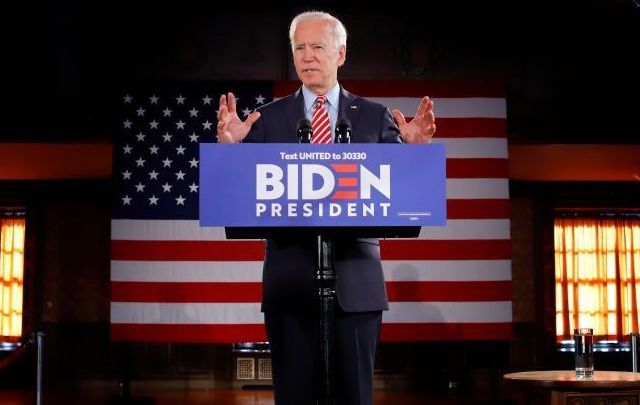 Irish American Joe Biden is speaking the truth he would beat Trump, impeachment or not, and the polls agree.

I’m getting very tired of the liberal media knocking back Joe Biden at every opportunity and promoting loony left Elizabeth Warren.

She wins every debate they claim, she has a plan for everything (so did Hillary Clinton), she is Harvard so she would be unbeatable.

As a member of the writing class, I can tell you the media retains a veneer of impartiality but they love to play king and queen makers.

Despite their best efforts, however, Irish American Biden is growing in strength in the polls.

The new CNN poll notes: “Biden has the support of 34% of Democratic and Democratic-leaning registered voters, his best showing in CNN polling since just after his campaign's formal launch on April 25.

“Sens. Elizabeth Warren of Massachusetts and Bernie Sanders of Vermont are about even for second, with 19% and 16%, respectively. Behind them, South Bend, Indiana, Mayor Pete Buttigieg and Sen. Kamala Harris of California each have 6% support, with Sen. Amy Klobuchar of Minnesota and former Texas Congressman Beto O'Rourke each at 3%.”

In other words, Biden first, everyone else nowhere. Across almost every age group and ethnic identity, Biden leads by a country mile.

But the most overwhelming proof is contained in the hearings every day on impeachment.

The extent and the scope of Trump’s attack on Biden and the depth of the Ukranian plot which has dragged in a host of leading White House figures tells its own story.

Russian and Ukranian oligarchs and a subset of shady characters out of a John Le Carre novel sends a signal of how important it was. Oh and don’t forget the reptilian Rudy Giuliani with a starring role in every twist and turn and likely, a hand in every wallet.

Trump himself is clearly terrified of facing Biden. There was a conspiracy to wipe out Biden and leave Trump facing a much less dangerous opponent.

Even the Russians know as Daily Kos pointed out.

“Prominent in the(Russian online) efforts so far is a group of Instagram accounts that are designed to look like they belong to people from different states with different backgrounds and political leanings who share just one common trait: a strong dislike for Joe Biden.”

There were no Lizzie Warren plots, zilch on Bernie Sanders it was all Biden all the time.

The reason is clear, Biden is telling the truth that he would beat Trump "like a drum” in an election. The polls show it.

Trump’s failed attempt to crush Biden before the real race began means Biden has just one more opponent to take on.

Yes, the media, which cost Hillary Clinton the presidency as they ran buck-naked after the bogus email story.

Biden has overcome tremendous tragedy in his life but it has made him stronger too, just watch the glint in his eyes in the midst of opponent attacks. This is a warrior.

If Democrats - assuming removal from office does not occur- want to beat Trump they need to understand one large truth, Joe Biden is by far the best bet.