One would have excused Biden if he cut short the Irish frippery and spent March 17th hunkered down in the Situation Room during a period when the world is holding its breath. 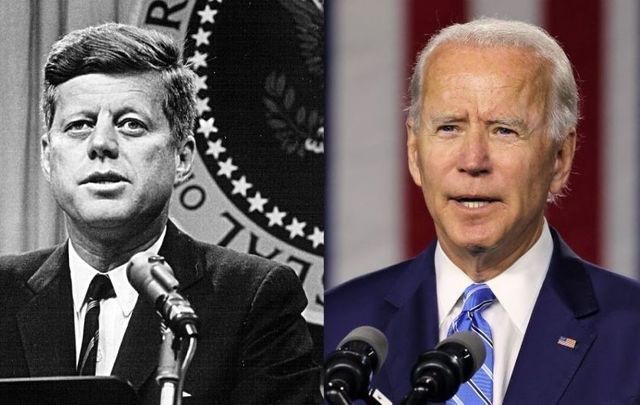 Joe Biden seemed immersed in a Celtic mist over Saint Patrick’s Day adding credence to the belief that his Irish heritage is his sweet spot, the topic which he seems most at home discussing.

From the Ireland Fund to the Speaker's Lunch to the Irish  American party at the White House on the evening of March 17th, Biden happily sailed along on a sea of Irish nostalgia that was only surprising if you never knew the man. At one point he remarked “Irish Americans think they are more Irish than the Irish” He was probably referring to himself.

Every cousin, aunt and uncle, great-grandfather, and grandmother who ever sailed the stormy ocean was remembered and celebrated. He even found time for a shout-out to his old boss Barack Obama and his Irish ancestor Fulmoth Kearney.

One would have excused Biden if he cut short the Irish frippery and spent March 17th hunkered down in the Situation Room during a period when the world is holding its breath and the specter of nuclear war has suddenly reappeared.

But perhaps Biden needed his own release valve to ease the incredible tension he currently lives under.

Only one other president, another Irish American, John F. Kennedy has faced such existential pressure as having to deal with a potential nuclear launch crisis. To put this in perspective experts say 35 million Americans would die within the first hour after a nuclear attack on a major US city.

Kennedy handled the crisis in October 1962 by proving to Russian leader Nikita Krushchev that he would not be threatened or bullied, but wanted an exit path for both sides, exactly what Biden had sought.

Krushchev realized the young and untried president was not going to run and hide. Just in time, the Soviet ships carrying the missiles to Cuba turned around.

No doubt Biden has studied how Kennedy, his political hero, did it, how he filtered out the extremists in his own cabinet who wanted to turn Cuba into a parking lot and start World War III.

There is one major difference this time. Kruschev was no madman but was a calculating politician who saw an opportunity to pressure the young US president.

Putin may or not be a rational actor, his angry language, long isolation, and vicious nature makes him a deeply unstable foe to be reckoned with,

He is also delusional. His brain trust told him the Ukrainians would fold within 48 hours, that they would welcome the Russian Army with flowers and Ukrainian troops would switch sides.

He would have been much better off calling a cab driver in Ukraine and asked what he thought would happen if Russia invaded.

. He would have got his answer in the words of the first Ukrainian troops who saw combat who, when asked to surrender, stated “Go F... Yourself.”

Unfortunately, Biden can not afford to be as blunt but he faces potentially the greatest crisis any American president has ever faced.

So let him enjoy his Irish dalliance and his love for his roots, doubtless it makes him a more rounded, expansive individual. He faces a massive test but like Kennedy before him has made no mistakes so far. He is wily and smart and has spent a lifetime sizing up politicians and world leaders. I have no doubt he will take Putin’s measure.

As his Irish ancestors would surely say “Go Cuinnig Tu Slan Sinn”. “May you keep us safe.” He will.