"It is no exaggeration to say that football from the very beginning made me love America almost more than anything else." 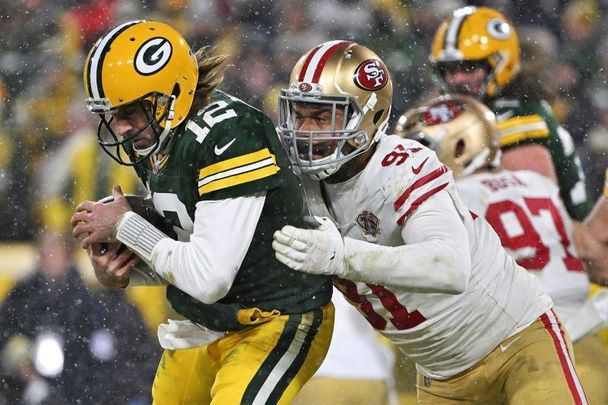 If you despair of America, if you have enough of the political shenanigans, if you prefer to watch a real fox in a field rather than the network, if MSNBC sounds like a cooking ingredient, then this column is for you.

If you could give a hoot about inflation, if you are unworried about personal debt with only five bucks in your bank account, if you'd rather win the Super Bowl than the lottery, then this column, this week, is also for you.

After exhaustive research (friends, family, the mailman, the Uber driver, the doorman in my office building), I have concluded there is but one thing that brings America together, one arena where the GOP and Dems can laugh and cheer and shake hands and root for the same side, or opposite teams.

Did you know that 49 of the top 50 programs on cable and network television in the past year were football games?

My question is what was the one program that wasn’t football? (The final episode of The Bachelor I think.)

Baseball is reeling, unable to overcome the fact that like cricket it's just plain old boring. Hockey is a once-a-week game on the networks.  Golf players are cutout carbon copies of each other without Tiger Woods, soccer is still the up-and-coming game as it was when I got to America in 1979.

While I love the English Premiership, I’m 3,000 miles away with no intention of getting up at 7 am for a noon clash in Britain.

It is no exaggeration to say that football from the very beginning made me love America almost more than anything else. It remains so to this moment.

My daughter is embarrassed when I wear my San Francisco 49ers jersey before every game. I tell her she can always waste her life waiting for the New York Jets to have a winning season or a quarterback who can throw 200 yards.

I write this column with a literal pain in my butt from being glued to the armchair in my living room all day Saturday and Sunday transfixed by the mortal combat on show from the final eight teams in this year’s Hunger Games, AKA the NFL playoffs.

Every one of the games was magnificent, superb athletes facing off all, seeking the crown of glory.

In Kansas City vs. Buffalo on Sunday evening, arguably one of the greatest games ever played say the experts, it was like an old-fashioned gunslinger shoot out with the young quarterbacks, Mahomes and Allen, throwing the ball from end to end like there was a booster rocket attached.

And perish the thought that I would forget the 49ers victory on Saturday, worth the price just to see the Packers quarterback Aaron Rodgers slink off at the end having been totally outplayed.

Then there was Tampa Bay and the old cowboy Tom Brady, perhaps saddling up for the last time, coming alive in the final quarter against the Los Angeles Rams but falling just short.

It strikes me that America desperately deserved a weekend like that, full of drama, excitement, and wonder. We needed it with Covid finally releasing its chokehold and life, hopefully, looking like returning to normal and spring on the horizon.

As for the Rams vs. the 49ers on Sunday at 6:30 pm, the Niners have won the last six times they met, yet somehow the Rams are favorites.