How modern Ireland was created

Niall O’Dowd, the founder of IrishCentral, shares an extract from his new book, "A New Ireland: How Europe's Most Conservative Country Became Its Most Liberal" 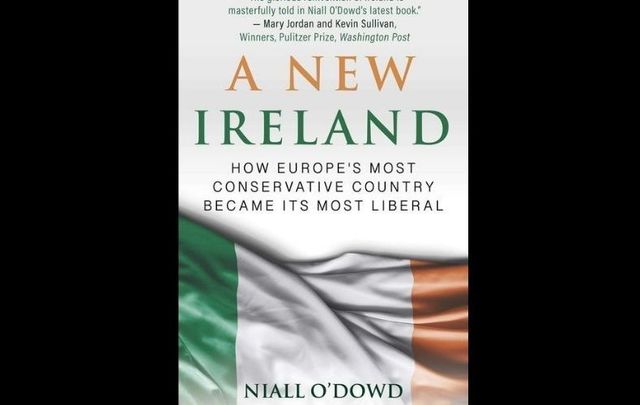 A New Ireland is available on Amazon and Barnes & Noble. Simon & Schuster

"We will be measured by what we did for the children of our time.”  -Irish Education Minister Donogh O’Malley announcing free education

On September 10, 1966, a powerful ripple that became a wave swept away Ireland’s antiquated educational system, unchanged since independence.

Donogh O’Malley, forty-five, tall, and strikingly good-looking, the recently minted Minister of Education in a Fianna Fail government, took to the podium at a National Union of Journalists Conference.

His speech would reverberate for the ages, a foundational ideal without which modern Ireland could never have developed as it did.

O’Malley made his speech unknown to his cabinet colleagues who would certainly have been in an uproar over it. Debate rages to this day whether Taoiseach Sean Lemass knew it was coming.

The educational system was a farce. At the time, about a third of children who finished primary school were dropping out of education at age fourteen, unable to pay the fees for secondary school. Though these fees were not large, the reality of large families was that there were often too many kids, all of whom could not be paid for. Young girls in large families usually lost out.

O’Malley pointed out that the departure rate meant that one-third of the workforce could only perform unskilled labor. Ireland, he stated, was utterly unprepared for the world of tomorrow.

At fifteen years of age, less than 50 percent were still in full-time education, while by sixteen, only 36 percent were still at school. A tiny number from the elite could afford a university education. As a result, Ireland had the equivalent of a Third World workforce.

O’Malley, an engineer, and architect by profession drew up the blueprint to change education forever. He did so single-handedly, aware that his political career was on the line. O’Malley sensationally called the education system “a dark stain on the national conscience.”

His proposal was crystal clear. Education would be free to everyone in primary and secondary level and bus transportation would be provided so that every child was able to go to school even from remote rural areas. “We will be measured by what we did for the children of our time,” he stated.

University education would also be heavily subsidized. If the student reached a certain achievement level in high school, the college/university would also be virtually free. He closed with a prophetic statement that Ireland needs to be “catering for the new age of technology.” Those words could be his epitaph.

His cabinet colleagues were aghast at the boldness of the move, but it proved so popular with the public they were unable to go back. O’Malley went on to launch several technological institutes, thus creating the groundwork for the Celtic Tiger to emerge. He looked destined for the top in Irish politics but suffered a heart attack and died in 1968. Thirty thousand people came to his funeral. The Free Education Act was implemented in 1967, the leap in educational standards followed immediately.

Put plainly, it enabled the country to join the European Economic Community in 1973 and the Celtic Tiger to happen a generation later.

Much the same began to happen on the economic side with another visionary leading the way.

Kenneth Whittaker, a career civil servant despaired of what was happening. He inveigled the then-Taoiseach Sean Lemass to try a daring new strategy to lure industrial companies into Ireland.

The truth was that Ireland was a dirt-poor country almost totally reliant on Britain for exports. It had only an agricultural economy because most industries were destroyed by tariffs and by a population that voted with its feet.

Economic war with Britain, over the refusal to turn over land rents owed to British landlords, had ended predictably with Ireland much worse off. Tariffs went up on both sides, but with Ireland 90 percent dependent on Britain for its exports, the country was seriously hurt.

In the aftermath, between 1945 and 1960, 500,000 emigrated from a country of only 3.5 million; de Valera’s Ireland was stripped clean of its young people. Plays like Brian Friel’s Philadelphia Here I Come and John B Keane’s Many Young Men of Twenty Say Goodbye attest to this fact.

When the First Programme of Economic Expansion (1958) was introduced, its author, secretary of finance Dr. Ken Whitaker, noted: “The common talk amongst parents in the towns, as in rural Ireland, is of their children having to emigrate as soon as their education is complete in order to be sure of a reasonable livelihood.” He was determined to change that thinking

The old ways held sway. Large families on small farms meant everyone but the first-born son had to leave to find work elsewhere. That meant countless numbers had no option but to take the boat to Holyhead in Wales and then a train to London or a boat or plane ride to America.

In an interview with the author, the New York Times columnist Maureen Dowd remembers the stories her father told her about having to leave. Though his refers to an earlier era, the circumstances hardly changed for decades after.

“My Dad left Ireland for a couple of reasons. He was the second youngest of 16 and there was no way he was going to get any of the land belonging to his father. He was also playing around with the IRA and his name was on a list.”

Michael Dowd, from Clare, was the son of a poor farmer in a poor country, the second child in the family named Michael after the first died. He was booked on the Titanic in 1912, but his mother cried all night, and he couldn’t leave her.

His older brother and his favorite sister had gone to the US, so he wrote, and they told him to come and stay with them. He went to stay with his sister in Boston before coming to stay with his brother in DC. He joined the Army, which gave him his citizenship, and he never left DC.

He grew up in the beautiful countryside in Clare, but “you can’t eat the scenery” as the locals said.

Many of the best and brightest like Michael left, never to return, and the Irish Diaspora, built during and after the famine, swelled to record numbers again in the 40s, 50s, and 60s.

The country was an economic wreck saved by men like O’Malley and Whittaker.

Whitaker championed free trade over the policy of protectionism, which had proved a disaster. He found a willing ear in Sean Lemass, the Taoiseach who had taken over from de Valera and who immediately put Ireland on a free trade path, culminating in the Anglo Irish Free Trade bill in 1965.

Whittaker also seized on a particular government agency, the Irish Development Agency, to seek out multinationals and offer them very attractive terms to come to Ireland.

It was revolutionary thinking and incredibly successful. In 2014 the Irish Times noted, “Today, Ireland is host to 1,033 multinational corporations. They directly employ 152,785 and account for 70 percent or €122.5bn of exports.” [3]

When protectionism—which had been in place since 1932—failed, Whitaker and Lemass, in turn, developed the IDA as the new spearhead for international development and realized this was the only way to develop the economy.

It began as a trickle. Pfizer came to Ireland in 1969. Coca-Cola and GE were also among the first to invest, brought in by the attractive tax rates. The IDA began targeting pharmaceuticals, technology, medical devices, financial companies.

Fueled by the European Union, the economy would go from basket case to the envy of Europe over the coming decades.

The combined impact was incredible and only possible because of the well-educated Irish workforce. It was as far from the small potatoes economy of the previous decades as was possible.

Another powerful modernizing player had also entered the arena. On January 1, 1973, Ireland became part of what was then known as the European Economic Community, later the European Union.

Joining the European community has meant a $55 billion boost for the Irish economy, much of it creating new infrastructure with modern highways, updated railway, and transportation system, extra airline terminals, and new airports, as well as massive investment in medical research, agriculture, and industry.

Most importantly, the Irish got to share in the single market, the largest in the world with five hundred million consumers membership of The European Union also forced the country to look outward for the first time.

"A New Ireland: How Europe's Most Conservative Country Became Its Most Liberal" by IrishCentral founder Niall O'Dowd is available on Amazon or at Barnes & Noble.