The Homecoming - My joyous first return to Ireland since COVID began

Niall O'Dowd was on the first full Aer Lingus flight from New York to Dublin this week as entry requirements in Ireland were finally rolled back. 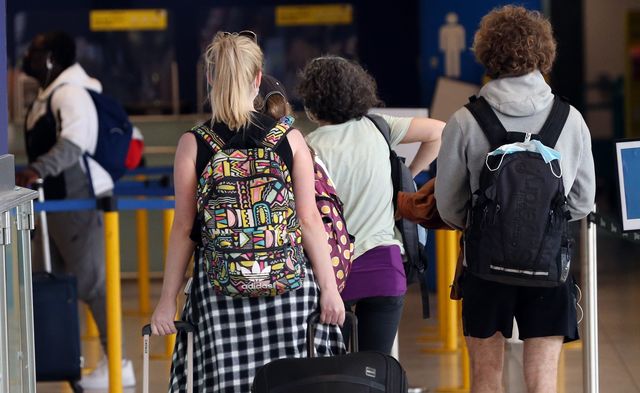 There were many joyful reunions in Ireland this week as the country relaxed its entry requirements for vaccinated travelers. RollingNews

Aer Lingus flew its first full flight since March 2020 from New York to Dublin on Monday, as Covid quarantine restrictions in Ireland are no longer in place and families can again reunite. Niall O’Dowd was on the joyous flight and reports on how it went.

The importance of family to Irish people was never more on display early Tuesday morning, July 20, as the first full Aer Lingus flight from New York to Ireland since Covid began in March 2020 arrived in Dublin Airport.

The plane had left JFK Airport six hours before, and I was one of the passengers. I can testify that I have never seen such a group of excited and expectant passengers in 35 years crossing the Atlantic.

The occasion, of course, was the end of the Covid restrictions for flying into Ireland, with no quarantine rules in effect for incoming passengers. It looks like thousands of Irish will take advantage of the long sought after day when they can fly home to meet and greet family and friends again.

[Editor's Note: If you are arriving in Ireland from the US and you are not vaccinated, you have to produce a negative PCR test and self-isolate for 14 days. Stay up to date with Ireland's travel requirements here.]

Earlier at JFK, I had expected short lines and a half-empty Terminal 5, as has been the case in recent months. I was totally unprepared for the huge crowd I encountered, many flying to Ireland but also to various locations in Europe where the new no-quarantine rules are also now in effect.

It was a happy chaos, though, with people finally realizing they were not too far away from loved ones or from their European vacation long denied because of Covid.

But a VERY strong word of warning for travelers to Ireland – the passenger locator form, which is mandatory for every traveler to complete, is required for check-in. There were a number of people, especially the elderly, who had not completed the form online and were confused by the process. The form is available online, and travelers should have it handy on their phones when checking in.

On board, the Aer Lingus staff greeted the packed plane by noting it was the first full flight from America to Ireland since March of 2020.

So it was special to be on board, and as befitted the occasion it was a smooth flight 35,000 feet in the sky. We arrived at Dublin Airport at 4:30 a.m. and the cheer when the plane finally hit Irish soil could be heard in New York. Home, that magical four letter word was finally reality for so many.

The passage through Irish immigration and customs was very rapid. Inspectors sought the proof of vaccination card and passport, but as far as I could tell, they were asking very few questions and allowing people to proceed.

In the baggage area, delays on the carousel because of our early arrival added to the anticipation. But if people expected friends and family to be waiting in the arrivals hall, they would be disappointed. Covid rules dictate that unless you are flying, you cannot enter the airport terminal. But the love and hugs were waiting for them outside the arrivals area.

But it was a remarkable day, a victory in a time of great stress where people missed funerals, marriages, and too many family occasions to name.

The Irish pride themselves on maintaining close family units. And the story of the emigrant coming home is one often told.

But never before was there a twist to the story like Covid.

For myself, it was wonderful to greet my brother again after 18 months and to catch up with his new grandchildren who I had never met.

Of course, life is a journey, and at times we get distracted and lose sight of what is truly important.

Tuesday’s scenes at Dublin Airport remind us all once again of how unpredictable life can become, and how important it is to keep in touch whit loved ones.

The photo on the front page of The Irish Times on Tuesday told the whole story. A granddaughter from San Diego, where her Irish parents live, raced into the arms of the grandfather she had not seen for almost two years.

It was hard not to feel emotional looking at that picture. And surely that wonderful scene will be repeated many times in the coming days and weeks as families finally reunite.

*This column was first published in the July 21 edition of the weekly Irish Voice newspaper, sister publication to IrishCentral.