Why are so many unable to make the connection between their forebears who risked all to cross the Atlantic and the current crop of Dreamers and immigrants caught in a different but just as terrible vice? 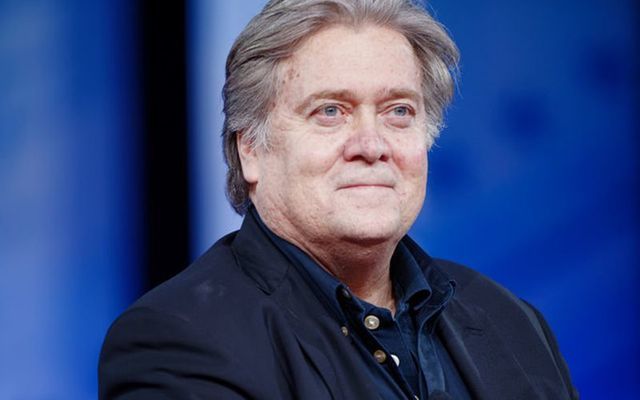 Irish Americans should remember where they came from.

That includes you Steve Bannon, a disgrace to your Irish heritage mouthing fascist slogans at a French National Front meeting at the weekend.

"So yes I will Steve Bannon, Irish American with an Irish-born wife you are racist, xenophobic and nativist."

How quick you forget your history. At the height of the Irish Famine in the period between 1845 and 1860, approximately 20,000 Irish a month were flooding into America. They had little choice. The whip of starvation and disease lashed them from their own land. Ireland was a shithole country, the biggest shithole country in the whole world.

Your people were among those starving Steve, how can you look in a mirror and live with yourself and foment such hate?

The Irish were driven out by hunger. “They are going, going and we cannot bid them stay,” wrote the poet Ethna Carberry.

Read More: Slashing legal immigration is a disaster for America - here’s why

The potato crop kept failing, a blight was upon the land. Desperate men and women died by the thousands on the roadside, many with green grass in their mouths. Famine, cholera, pestilence were everywhere.

In desperation, they looked west to an t-Oilean Ur, “The Fresh Land,” as America was called. They launched on coffin ships. There were one million of them Steve.

A cold coming, they had. “No Irish Need Apply”, “No pope here.” Lincoln’s law partner Thomas Herndon wanted to slit all their throats; the xenophobia and hatred of them fueled the Know Nothings, the Ku Klux Klan of their time. Steve you would have been right up with the Know-Nothings attacking the Irish, your people

They were murdered and chased down. On Bloody Monday in Louisville in August 1855, their houses were set afire for trying to vote. “We are advised that five Irish men roasted to death,” wrote the Louisville Daily Journal. Throw another log on the spit Steve?

How have so many Irish  forgotten this in 2018? Why are so many unable to make the connection between their forebears who risked all to cross the Atlantic and the current crop of Dreamers and immigrants caught in a different but just as terrible vice?

The fact that they are not Irish should not make a whit of difference to us.

They are deserving of our support, all the more because of our own community’s experience. Do not treat them as we were treated.

Why are so many prominent Irish Americans anti-immigrant all of a sudden? The Sean Hannitys, the Steve Bannons the Mike Pences, the Kelly Ann Conways, all foaming about borders and walls and keeping THEM out, and deporting THEM, even dreamers. They are conveniently forgetting, of course, their own forefathers were once THEM.

Not that all immigrants should be allowed in, but a reasonable debate based on facts, not scurrilous lies that sound like the very same anti-Irish hysteria of the 19th century, needs to take place.

What is happening now on St. Patrick’s week 2018, with talk of “Shithole” countries and appeals to blatant racism often led by Irish, is utterly unacceptable.

The lies include that immigrants take more than they give, are a burden to the economy (Hello Sergey Brin, Elon Musk, Steve Jobs’ father from Syria — Do you think he’d have a prayer of getting it now?).

What is most insidious is that suddenly Trump and Company are going after legal immigration, trying to slash it in half.

The hottest place in hell should be reserved this St. Patricks Day for the Irish who want to pull up the ladder, shut the doors of Ellis Island and turn off the lamp at the Statue of Liberty.

The American Dream is not working with the current immigration system. Credit: iStock

They disgrace their culture and history by so doing.

Those Irish Americans forget where they came from and how, from such grim beginnings, grew a great and transformative community driven by an incredible resilience.

“It is that quality of the Irish -- that remarkable combination of hope confidence and imagination that is needed,” JFK, great-grandson of an Irish barrel maker said, addressing the Irish parliament in 1963.

We had it in buckets. Those qualities meant that within three generations they had not one but two charismatic presidents in the White House, JFK and Ronald Reagan. Pride in being Irish is a badge over 32 million Americans wave proudly.

Read More: Reality of America’s immigration issues cannot be boiled down to sound-bites

That is the real and incredibly positive lesson of Irish America, to rise above, not wallow in the mud.

So lift ourselves to see others as we were once seen not as some alien THEM.

Let’s not erase our history by becoming the vanguard of the Know Nothings like Steve Bannon, the turncoat in 2018.

We Irish are so much better than that.