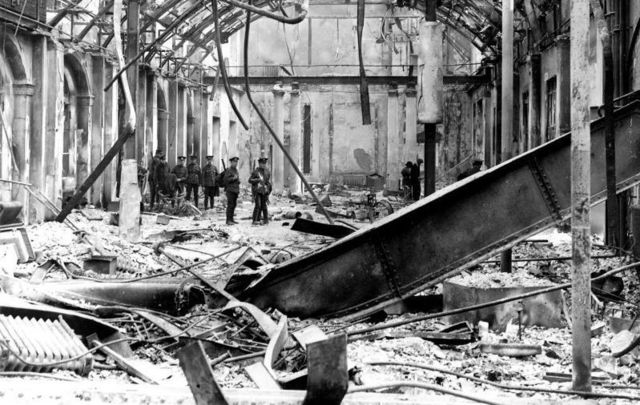 Rubble of the General Post Office on Sackville Street in Dublin after the 1916 Easter Rising. Getty Images

The differing reactions to the Easter 1916 Rising in Irish America and Ireland can be gauged by the editorials in the two most popular Irish papers in their respective countries.

The Irish Independent, which claimed it had “more than twice the net sales” of any other Irish newspaper, dominated Irish media at the time of the Easter Rising.

It was owned by businessman Martin Murphy, a notorious anti-Parnellite and strikebreaker who led the fight against the workers during the 1913 lockout. His newspaper spoke to the respectable middle-class Irish. He was a former member of the British parliament.

The Gaelic American was the New York-based publication of revered Fenian John Devoy, who was originally from Kildare. He had done five years penal servitude after the abortive Fenian rising in the 1860s. He was likely the least surprised as he kept closely in touch with the 1916 leaders. Five of the seven who signed the proclamation had visited America and he arranged major funding for them.

The Independent reacted with total venom to the Easter Uprising and read it completely wrong given subsequent events.

Its headline on the editorial was “Criminal Madness” and opened by saying, “No terms of denunciation would be too strong to apply to those responsible for the insane and criminal rising of last week.”

The Independent added that thankfully “Irish blood” spilt in the First World War “is an expiation (making amends) for the acts of unfilial ingrates who have besmirched the honor of their native land”...”our heads must hang low in shame for the misdeeds of those...”

They stated the “net result of The Rising was the death of innocent women and children, the wholesale surrender of the Sinn Feiners and the monetary loss to Dublin and to Ireland.” Making clear they agreed with the death sentence for the leaders The Independent wrote “We care little what becomes of the leaders who are morally responsible for this terrible mischief.”

In one respect the Independent got it right, noting that the Ulster Volunteers led by Sir Edward Carson in the North had only encouraged rebel forces in the south.

In its final paragraph, Ireland’s largest selling newspaper stated, “The Rising was a mere matter of hours a miserable fiasco leaving behind its trail of war and horror. Let us in God's name be done with resistance or thought of revolution in Ireland whatever its guise or pretext.”

It would be hard to see how a newspaper could get the prognosis of the aftermath of The Rising more wrong. Within two years the country would vote over 70 percent for Sinn Fein candidates, Within five years an independent state would be born. The Independent continued with its anti-Sinn Fein line so much so that Michael Collins ordered the Independent presses smashed.

Devoy, on the other hand, discerned the historic event with much more accuracy. Not for the first time, including the recent peace process, Irish Americans saw something from far away from where those too close to it could not see or understand.

He called it “the most formidable insurrection that had taken place since 1798...” and which “exceeds that (1798) in importance because it is a blow aimed at the heart of English power in Ireland."

He praised the fighting ability of the Irish insurrectionists saying “…the insurgents fighting with inadequate supplies of arms and ammunition and without highly trained superior officers have given a very good account of themselves and have made a very important change in the whole war situation.”

Devoy erred in believing the insurrection would continue “until England’s army is smashed on the continent and the Germans get to London.”

Devoy ended by appealing for support from Irish Americans for the uprising. “Ireland's only salvation lies in cutting loose from England,” he wrote.

“Whatever temporary advantage England may be able to retain this action will ensure the final triumph of the Irish Cause and must command the vigorous and energetic support of the Irish Race in America.”

No doubt, though, that two countries, two versions of Irish, held two views on Easter 1916 that were utterly, diametrically opposed. Irish America certainly got the better of the historic nature of what happened in Easter 1916.