Labor pains in Ireland and the UK

The radically different situation between Ireland and the UK when it comes to labor disputes. 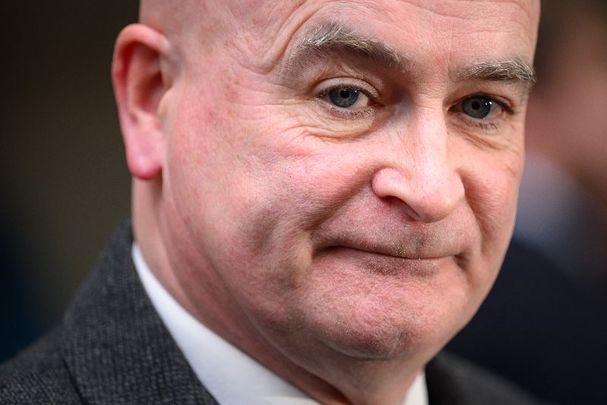 November 24, 2022: Mick Lynch, General Secretary of the National Union of Rail, Maritime and Transport, speaks with the media outside the Department of Transport following talks with the Government looking at ways to stop the proposed rail strikes n London, England. Getty Images

It is often said that if the UK sneezes, Ireland will catch a cold, a saying that speaks to the interconnectedness between the two countries.

And while it’s true that there are many instances where the Republic takes a lead from across the Irish Sea, one area where there is divergence is in industrial relations. That definitely is a good thing given the winter of discontent that is now sweeping through our closest neighbor.

Britain is in the midst of a deluge of work stoppages and strikes. Planes, trains, and automobiles have all been hit along with buses, schools, the National Health Service through nurses and ambulance staff, and postal workers.

In a bid to curb future disruption, the British government is introducing contentious legislation designed to limit the effectiveness of industrial action by enforcing a basic level of service in the case of strikes in vital public services. This has not gone down well with trade unions, especially with the bête noire of the establishment, London-born Mick Lynch, leader of the National Union of Rail, Maritime and Transport Workers.

Proud of his Irish heritage, Lynch is the son of a Cork father and Armagh mother whose hero is Irish revolutionary leader and trade unionist James Connolly. He is not for turning in the face of unrelenting criticism from the UK establishment which has made him public enemy number one.

Lynch’s attitude towards confrontation and hostility is perhaps best summed up by his comment that “if you see a ball, you ought to kick it sometimes.”

The situation is radically different in the Republic of Ireland and has been since the 1990s when legislation was introduced to resolve disputes through dialogue and conciliation. The Irish government’s central role has been to facilitate collective bargaining between employers and trade unions and to intervene in disagreements.

The main collective dispute mechanism is the Labor Court which is overseen by 13 full-time members with equal representation from employers and workers and an independent chair. The court adjudicates on collective industrial disputes.

It can be very difficult to sack an employee in Ireland. It is these individual decisions of the WRC that provoke most commentary and frankly some levels of disbelief.

Take the case of a manager of a family-owned SuperValu grocery store in Carlow. A self-declared alcoholic with a history of alcohol-related incidents, he was put in charge of the store one weekend in October 2020 while the owners attended a wedding.

The WRC official report takes up the story from the shop owners’ point of view: “There would be no family presence in the store, and it was agreed in advance that the manager would have sole and exclusive responsibility for the business that weekend.

“Unfortunately, the manager had a major alcoholic related incident on the 24th October. He had brought a considerable volume of alcohol to the store. He had consumed it on the premises, to such an extent that he had become completely unconscious and seriously alarmed his immediate colleagues as to his well-being. He was brought home by his colleagues.

“In their testimony the respondents referred to the old saying, ‘When the cat is away the mice can play.’ In this context the bringing in of a large amount of alcohol by the complainant was particularly egregious and personally upsetting for the family managers who had implicitly trusted him.”

From the managers’ point of view, while he admitted his behavior he said that he subsequently attended a 28-day residential treatment program and was now a “changed man.” He sought “reasonable accommodation” from the shop to help him cope with his alcoholic disability.

Following a disciplinary hearing and an appeal, the manager was dismissed and promptly took his case to the WRC. In November last year, two years after the incident, a decision was made and the sacked manager was found to have been discriminated against and that no effort was made at having a reasonable accommodation for him. The upshot was that he was awarded roughly $43,000.

The message is clear. With over 50 pieces of employment legislation protecting employee rights in the workplace, the onus is very much on the employer to abide by their obligations, and those obligations are changing all the time.

In 2022, there were a number of key changes, including one that ensured tips given by customers are distributed fairly and not kept by management, as well as the introduction of an entitlement to three paid sick days per year. Other changes in the pipeline include a limited right to request to be able to work from home as well as gender equality reporting obligations.

There are challenges ahead. Discrimination towards people with disabilities is still pervasive. Combined housing and cost of living challenges are also having a significant impact on hiring new staff, with employers paying for short-term accommodation or recruiting local candidates only.

Ireland has come a long way since the days of emigration out of economic necessity, and we now have a record number 2.55 million people in work. The major issue at present is not about letting people go but the opposite - retention of good staff.

Some reports indicate that up to 18 percent of employees are actively seeking new employment, with the main reasons for leaving an employer being higher salaries, career advancement and a better work-life balance.

It’s clear that in the recruitment merry-go-round, the power has shifted to the employee. No longer a case of, “What can I do for you?” the question now is, “What can you as an employer do for me?”

*This column first appeared in the January 18 edition of the weekly Irish Voice newspaper, sister publication to IrishCentral. Michael O'Dowd is brothers with Niall O'Dowd, founder of the Irish Voice and IrishCentral.