Allied Irish Banks (AIB) was forced to back down from a decision to cut service in 70 rural branches after facing public indignation and political pressure. 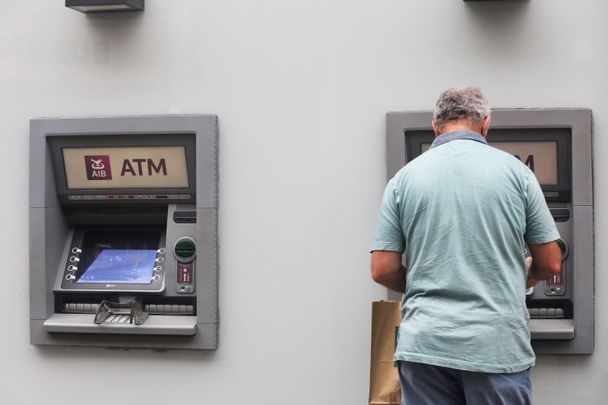 A person using the hole-in-the-wall AIB Automatic Teller Machine (ATM) to get money on Dublin's Grafton Street after AIB announced it would be going cashless in its rural posts, a decision that was soon reversed. RollingNews.ie

It's not often that the public gets one over on financial institutions, but that’s what happened recently with Allied Irish Banks (AIB) and its plans to cut services in 70 of its branches in towns around the country.

For once, the so-called Masters of the Universe were forced to eat humble pie and reverse a decision that would have stopped cash services to tens if not hundreds of thousands of their customers. It was an episode that highlighted the greed of banks, the incompetence of the Department of Finance, the power of communities working together, and, for once, Taoiseach Micheál Martin being on the right side of a controversy.

AIB has 170 branches across the country, and they proposed two weeks ago that over-the-counter cash, check, and ATM services would be removed from 70 rural locations. A statement on the bank’s website said, “Some of our branches will no longer offer cash and check services at the counter, or through machines inside the branch. This means we will not have notes, coins, checks, foreign exchange, bank drafts, and will remove any drop safes and night safes.”

The statement added that if there was an ATM outside the branch, that would also be removed. AIB’s solution to the change was to redirect customers to the local post office with its limited facilities.

Had the plans gone ahead, they would have caused incalculable damage to rural economies where the uptake in online banking is less than in urban areas, with in some instances up to 70 percent of transactions using cash. For individuals, especially the elderly, it would have meant long return journeys to larger towns to stand in line in order to cash checks, withdraw money and make lodgments.

For business, the effects would have been equally serious. Security concerns around cash lying around overnight weighed heavily on the minds of shop owners and professional service providers in the affected communities. Equally of concern was a potential drop in customers as the pull effect of the larger towns with fully serviced banks would inevitably hit local trade.

The justification given by AIB was that there has been a 36 percent decline in cash withdrawals from ATMs, a 50 percent fall in check usage over the past five years, and a fall of almost 50 percent in branch over-the-counter teller transactions.

The last point frankly cuts no ice as staff numbers in AIB have been dramatically reduced in that same timeframe, with individuals employed specifically in branches to direct people away from the dwindling number of tellers. The five years also included two years of lockdown when we all stood still and several banks shut or had restricted opening hours.

Politicians were quick to criticize the plans. But AIB had done its homework and the announcement was made the week after TDs had jetted off on their summer vacation.

Once the public took up the cudgels, however, Minister of State at the Department of Finance Seán Fleming insisted that he, Finance Minister Paschal Donohoe, and the Government had been “blindsided” by the decision. It quickly turned out that was not the case, and the department was informed at least four days in advance of the planned announcement. If Donohoe was blindsided, then it was by his own Department, although frankly, this lame excuse has all the hallmarks of what Nixon once termed “plausible deniability.”

Bad enough not being aware of what the department knew, there was a double whammy for the hapless minister when the Taoiseach went over his head and called on AIB to reconsider, and went as far as inviting officials in for talks. By all accounts, this irked Donohoe who felt that this was an encroachment on his area of responsibility.

It has been a bad few months for the rather smug Donohoe, dating back to April when he foolishly, in front of all of Europe, boasted of meeting the widow of a well-known Portuguese writer only for it to be pointed out that the individual in question had never married. As we say in Ireland when something horribly embarrassing happens, “I was scarlet for you.”

But really, in relation to AIB, there can be no excuse for his initial inaction. The bank is 70 percent owned by the Irish government, there are clear lines of communication established, and the state still has a role in nominating but not appointing potential directors. Also, AIB has just acquired, with government approval, the mortgage book of Ulster Bank which is pulling out of the 26 counties.

While Martin read the tea leaves better than most in relation to public opposition, what lit the spark was a call by a small Leitrim Gaelic football club for the GAA to drop AIB sponsorship. Ballinamore Sean O’Heslin released a statement calling on the GAA to “cease all partnerships with an organization that clearly does not have the best interests of our communities at the forefront of its thinking.”

The response and support from around the country was swift and overwhelming, with GAA clubs and individuals threatening to withdraw funds and change banks. AIB recognized it was in a battle it couldn’t win and changed tack.

What message does this contain for AIB? Well, a quick look at the bank’s website shows its commitment to diversity on its board which they define as including geographical and industry experience, background, nationality, ethnicity, gender, and age.

Given AIB’s complete inability to recognize the damage it was about to perpetuate on rural Ireland, a representative from this sector should be included at top decision-making level. It’s something that the board of AIB Group should put top of its agenda. The chair, James Neilson Pettigrew, who is also on the board of Scottish Ballet, might consider it prudent to make such an appointment in order that the company is not involved in countless policy pirouettes and half pirouettes.

The message for consumers and the government is more ominous. Ireland currently has effectively a duopoly in its banking sector with two major players, AIB and Bank of Ireland. A third bank, Permanent TSB, has a minor stake in the economy.

Over the last year, Ulster Bank announced it was shutting down operations while KBC Ireland sold off its loan book and headed for the exit. The cavalier attitude of AIB where it engaged in zero consultation with communities and businesses it serves is a sign of things to come.

A viable, public bank is urgently required that would be regional and customer-focused rather than profit-focused. Irish politicians have already looked at the German Sparkasse model which has 12.000 branches.

The Department of Finance is cool on the idea, but with our literature-loving Minister Donohoe expected to move on at the end of the year in a Cabinet reshuffle, it surely is time for fresh thinking, bold ideas, and action. Revisiting the German model and partnering with a foreign bank could solve a lot of emerging problems. A pas de deux, so to speak.

*This column first appeared in the August 3 edition of the weekly Irish Voice newspaper, sister publication to IrishCentral. Michael O'Dowd is brothers with Niall O'Dowd, founder of the Irish Voice and IrishCentral.