Ireland's health service is a total mess, and how we have arrived at this juncture is a textbook case of political and bureaucratic incompetence. 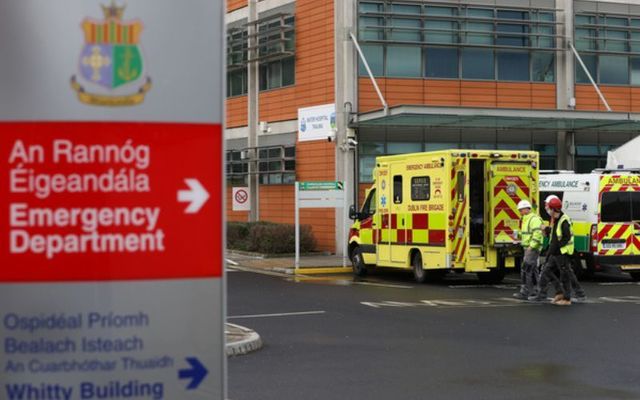 January 10, 2023: Ambulances outside the Mater Hospital Emergency Department entrance after the Irish Medical Organisation claimed it is likely that some patients will have died as a result of delays in the health system in recent weeks. RollingNews.ie

Over the last few weeks, Ireland has been convulsed by the crisis in our health system driven by the perfect storm of increased Covid cases, a contagious strain of winter flu, and a virulent respiratory virus (RSV).

Cold, cough, and flu medicines are in short supply as usual supply chains have dried up. Pharmacy shelves are half empty as soaring energy costs, inflation , and supply chain problems with delivery to the periphery of Europe have contributed to hundreds of generic medicines disappearing from the Irish market and patients seeking treatment in hospitals.

The accident and emergency departments (A&E) in all our hospitals are overrun with sick and ill individuals, so much so that people are being placed overnight on trolleys and chairs as beds are all tied up.

One night last week, a record number of 931 patients were left waiting for beds.

But as always, it is the individual stories behind the numbers that have really outraged the public, and there have been plenty of reports of cases from around the country.

In Cork, 70-year-old Patricia McCarthy had to wait 57 hours on a chair in a Cork hospital after going to the A&E with severe lung pain.

In Limerick, 16-year-old Aoife Johnston was left on a trolley for 15 hours while she was dying from meningitis in an overcrowded emergency department.

A young Waterford woman, Angel Wall, went on national TV to talk about her ordeal of being brought to Dublin by ambulance for an emergency admission for complications after brain surgery. She had to wait on a trolley for over 18 hours for the promised bed without a pillow despite having serious head swelling. Describing her conditions like that experienced in a war zone, she said if she put out her two hands she could touch patients on either side.

Then there were the cases in Drogheda of children in a pediatric A&E whose parents were told to bring them back to their cars to sleep as there were no trolleys or chairs for them.

One of the most shocking aspects, though, is the effect all this is having on the elderly. Geriatrician Dr. Ronan Collins has painted a bleak picture of how these negative “front door” experiences in the emergency departments impact senior citizens.

These include delirium, confusion, and uncharacteristic aggression. Also, confining them to trolleys starts the process of losing muscle mass and incontinence.

How we have arrived at this juncture is a textbook case of political and bureaucratic incompetence.

Astonishingly, in the last 15 years, eight A&E departments were closed by the Health Service Executive who in the past week has desperately tried to reopen some of them.

Ireland’s ratio of hospital beds per 1,000 people is well below the OECD average and is lower now than it was 14 years ago. One economic think tank, the ESRI, has stated that we need an additional 1,500 beds by 2030.

But what is truly tragic is that the current situation was widely predicted by medical professionals. Every year come October, the government announces a winter plan to deal with the expected capacity problems in our hospitals.

This winter was no different, but the response of the Irish Medical Organisation that represents doctors was scathing. It was, they said, “meaningless to those working in our health services and those who need care.”

In particular, the group said that the budget was insufficient to tackle the enormity of the yearly challenge facing our health service over the winter months, especially as there were 900 vacant consultant posts.

"The annual unveiling of the Winter Plan has become increasingly unmoored from the daily reality of the services. It’s now more about branding than a meaningful intervention to deal with the capacity issues, workforce crisis and patient waiting lists.”https://t.co/h5QOLJmV4C

Dr. Fergal Hickey, president of the Irish Association of Emergency Medicine, had warned in September that winter would be “hell on earth,” an Armageddon-type situation for both patients and hospital staff due to the lack of acute beds, the lack of critical care beds and the difficulty in recruiting staff who were “voting with their feet” and emigrating to work in Australia and Asia where work conditions were better.

While patients are in the firing line in this dysfunctional system, they are by no means the only victims. Frontline medical staff are under enormous pressure with doctor and nurse representative associations reporting widespread burnout with staff leaving for a variety of reasons.

The Irish Nurses and Midwives Organisation (INMO) has threatened to institute industrial action if their concerns about safe working conditions are not dealt with.

According to the INMO, nurses have been “traumatized” by what they witnessed in the hospital wards and have called for the situation to be declared a “national crisis.”

What has transpired this week in our hospitals was totally avoidable. Nurses are now expected to crisis manage a situation that isn't of our making.

The INMO Executive has agreed to begin a period of consultation with our members on industrial action.https://t.co/QmgoeLbmKV pic.twitter.com/oUUmbsf4EV

The fiasco is being presided over by Minister of Health Stephen Donnelly. The coalition government had the opportunity to drop this underperforming minister last month but decided to reward his continuing ineptitude with two more years in office.

Donnelly has conceded that the current situation will cost lives, with one expert suggesting 50 unnecessary deaths per week will occur because of overcrowding.

Nonetheless, the minister has struggled to put forward a coherent plan with a credible timeline to fix the mess, a plan that would deal with bed capacity limitations and provide additional frontline staff, and a timeline that is achievable and realistic.

This is most definitely a mess of the government’s own making. The current Taoiseach, Leo Varadkar, was minister for health in 2015 when he said that he was “sick to death” of hospital overcrowding, saying no one should be on a trolley for more than nine hours.

His predecessor in the top job, Tanaiste Micheál Martin, is also a former minister of health at a time when overcrowding was becoming a major political issue.

Collectively, Fianna Fáil and Fine Gael have between them held the position of minister of health since January 2011. In the view of most commentators, they have run out of ideas, and with a general election scheduled no later than two years, they are also quickly running out of time.

In the meantime, we are left with no beds, no pillows, no chairs, no trolleys, and no dignity – a snapshot of Ireland’s health service in 2023.

*This column first appeared in the January 11 edition of the weekly Irish Voice newspaper, sister publication to IrishCentral. Michael O'Dowd is brothers with Niall O'Dowd, founder of the Irish Voice and IrishCentral.