Conor O'Dowd and his father are speaking out after a report said that 95 percent of fetuses prenatally diagnosed with Down syndrome in Dublin’s Rotunda Hospital are aborted. 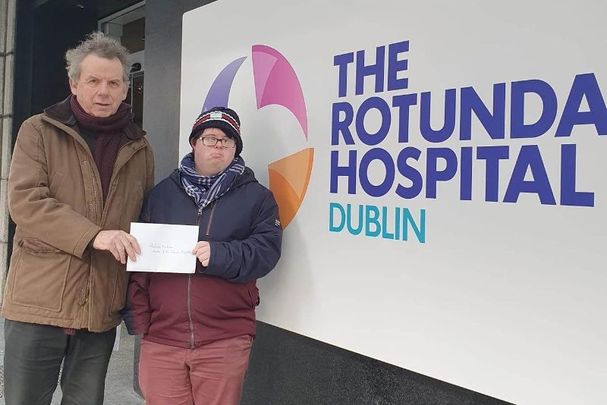 It was a gut wrench to open up the newspapers on St. Stephen’s Day and see a headline stating that in one of Ireland’s largest maternity hospitals, 95 percent of cases of prenatally diagnosed Down syndrome (DS) choose to terminate.

The statement was made by Professor Fergal Malone, the master of Dublin’s Rotunda Hospital, an archaic name for the chief medical officer. Speaking as a parent of a young man with Down syndrome this is a truly tragic figure, implying as it does that he is a second-class citizen and that people with DS should be neither seen nor heard.

It puts the Rotunda right up there with the most permissive maternity regimes across Europe and fast approaching a situation like Iceland that boasts of zero DS births and 100 percent terminations.

Malone sees no ethical, moral or legal dilemma in this situation and is quoted as saying, “I don’t have a view on whether that is the right thing.”

What is really shocking, though, is that there has been no statement on this from the Irish government, from disability organizations in general or from the support group Down Syndrome Ireland in particular. A new social policy, the elimination of Downs kids, is apparently being created before our very eyes, by interview, without comment, question, or intervention.

In 2018, the same Professor Malone stated that "approximately half" of all parents with a prenatal diagnosis of Down syndrome aborted the baby, while the other half did not. That figure has now risen to 95 percent in his hospital.

What are the reasons for such a huge increase since then, and how did we get to such a state of affairs? Undoubtedly the change in the Constitution that removed the ban on abortion is part of the reason, but it’s not the whole story.

First thing to note is that during that campaign to repeal the 8th Amendment and legalize abortion in 2018, there was a concentrated effort by politicians and the media to shut down any discussion on Down syndrome. For instance, the then health minister refused to debate the issue, stating that it was "offensive" to suggest that Irish women would choose to terminate a pregnancy due to a diagnosis of a disability.

The siren warnings of parents were ignored – or worse, still ridiculed – and sadly what was predicted has now come to pass. Consequently, we sleepwalked into a situation where the termination of a fetus with DS has become routinized.

Advances in science have also facilitated the widespread denial of life to unborn children with DS. Advanced screening tests such as non-invasive prenatal tests (NIPT) have been developed to screen pregnant women at an early stage for genetic anomalies including Trisomy 21 (T21), the medical term for Down syndrome.

This, along with an increase in maternal age, has led to an increase in genetic complications in newborns. The average age of all mothers in Ireland in the first quarter of 2022 was 33.3 years compared to 10 years ago when the average age was 31.8 years for the same period.

Unfortunately, the science has got way ahead of the ethical discussion which is not surprising when you consider that the global NIPT market is projected to grow from $4.11 billion in 2021 to $13.16 billion in 2028. Turnover and their meal ticket is made by identifying, in utero, the most fragile, helpless, and defenseless.

One of the main providers of this service in Ireland is Evie, for which Malone is a listed consultant. It has a brochure advertising its services with photographs of fair-haired children and babies with not a disability in sight.

What happens once the T21 gene has been identified is at the center of the ethical and moral dilemma as the condition is compatible with a long, happy, and fulfilling life. Sadly no one wants to discuss this.

So what information are expectant parents given, and why do they overwhelmingly decide to terminate a life?

Malone in the aforementioned interview stated that the Rotunda “strives to be non-directive in its counselling to affected couples.” Not very successfully, it seems, if 95 percent choose an abortion.

In fact, anecdotal evidence suggests that information given in some maternity hospitals is anything but objective. Parents have told me that euphemisms such as “medical management” are suggested to parents to deal with the diagnosis, and in one case an older mother was guilt-tripped by being told that she “should have known better at her age.”

A study published last year in the Journal of Intellectual Disability which looked at the information given to parents of newborns with Down syndrome is informative of the general culture within Irish maternity hospitals. One comment in particular bears out a common experience of parents feeling that the amount of medical information they received after the diagnosis was too much.

A mother said that she received “a black and white sheet of all the medical problems that she could have. I remember thinking, are you for real? This is my baby. I just grew her. She is a living person. That was cold and very overwhelming.”

The “lived experience,” to use Malone’s words, would appear to reflect the findings of a 2020 study in the United States that said, “Mothers reported negative experiences with medical staff, including a lack of compassion, pressure to terminate their pregnancy, and pessimistic expectations about outcomes for their child and family. Many received limited or no additional resources or support systems. ‘’

It is for all the above reasons that we need a full debate and discussion on the use of NIPT and the information given to parents subsequent to a diagnosis.

The real heroes of this story are the five percent of parents that in the face of such overwhelming medical negativity went ahead and had a child with a disability.

But not everyone is silent, and having read the interview, my son Conor, who has DS, took it upon himself to write to Malone.

In his own words, he said he didn’t understand “why people were trying to take away babies with Down syndrome. It is very wrong and unfair.”

“What are you telling parents?” my son asked. “Tell them the truth,” he said, before concluding, “Please save babies with Down syndrome.”

You can watch Conor O'Dowd's video message to the Rotunda Hospital Dublin here:

Conor's response, in his own words, to the statement by Professor Malone that 95% of pregnancies diagnosed as being Down syndrome are terminated

*This column first appeared in the January 4 edition of the weekly Irish Voice newspaper. Michael O'Dowd is brothers with Niall O'Dowd, founder of the Irish Voice and IrishCentral.