In recent times the Vatican ban on female ordination has entered the mainstream of synodal deliberations. Far from a taboo subject, it is now a matter for discernment for the global church. 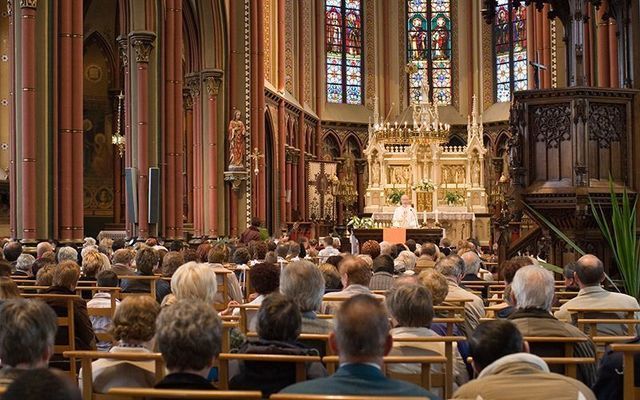 About seven years ago, my wife and I participated in a Mass in San Antonio, Texas, where the main celebrant was a woman.

We were part of about 300 people attending a conference under the auspices of Call to Action, a Catholic organization that takes a jaundiced view of how women are treated in the church and which rejects some traditional Vatican pronouncements, especially in the area of sexuality.

The Mass was a memorable event with a pervasive sense of community, and the priest who preached the sermon did a masterful job.

We were staying with a priest friend who worked in a parish nearby. At breakfast the following morning we shared our positive reaction with him and two of his colleagues. He and a younger man responded positively saying that, of course, women priests would be a big plus for the ecclesial community.

The third man had a different perspective. He pointed out that the so-called priests were excommunicated, latae sententiae (automatically) by the Vatican and, looking at me, he warned that those showing deference to the ceremonies we attended may well have fallen foul of Canon Law.

Pope John Paul II asserted in 1994 in a formal document, reminiscent of papal declarations in the 19th century, “that all doubt may be removed regarding a matter of great importance, a matter which pertains to the church’s divine constitution…I declare that the church has no authority whatsoever to confer priestly ordination on women.”

Cardinal Suenens, the respected Belgian bishop, counseled the pope against issuing such a strong binding mandate, warning him that he could be making what he called the Galileo mistake. He was referring to the papal condemnation as heresy of heliocentrism, placing the sun and not the earth at the center of the universe, propounded by Galileo, during the Inquisition period in the 17th century.

John Paul’s statement was made nearly 30 years ago, and his categorical teaching on this matter is certainly not accepted by many Catholics today. Multiple theologians believe that the pope used weak theological arguments to bolster his own patriarchal prejudices.

In recent times the Vatican ban on female ordination has entered the mainstream of synodal deliberations. Far from a taboo subject, it is now a matter for discernment for the global church according to the Vatican synod office.

Even the United States Conference of Catholic Bishops, a thoroughly conservative organization, called considerations about female ordination “a matter of justice” in their official report. The Women’s Organization Conference (WOC), the main American proponent of women’s ordination, is now featured on the Vatican website.

The old assertion that all the apostles were male, so priests must also be drawn from one sex, no longer holds water. This spurious logic is rarely heard anymore as scholars increasingly stress that Christ was a Jewish man of his time following the customs of those days. A common countering argument would ask whether the 12 Jewish men he chose should be replaced only by people from the same ethnic background.

In a recent extensive interview with the New York Jesuit magazine America, Pope Francis attempted to answer this important and knotty question: why should women be excluded from ordination to the Catholic priesthood?

His answer began by stating that the question must be seen as theological, placing his answer in the domain of beliefs about God. “The church is woman. The church is a spouse. We have not developed a theology of women that reflects this…the dignity of women is measured in this way,” he said.

Obviously, Francis is speaking metaphorically here, but what do his words mean?

He claims that this language represents the Marian principle in the church.

The other church dimension, which he identifies as the Petrine principle, covers ordained ministry and is confined to males. They make all the big decisions.

The saying known to every priest is encapsulated in this Latin dictum: Roma locuta est; causa finita est. When the men in Rome speak on any controversial religious topic the case is closed!

In his interview, Francis noted that there is a third principle which he named as the administrative way. This relates to decision-making in the church, and he bemoaned the traditional lack of female input in this area. He pointed out that he has promoted a few women to top positions in some of the 16 curial departments that comprise the Vatican bureaucracy.

He went on to say that his experience so far has been very positive. The places where he appointed women to senior administrative positions are actually performing significantly better than before.

In addition, he told the American editors that when he was assessing seminarians for ordination, he listened appreciatively to the feelings of women and recalled rejecting a few candidates on female advice.

Nobody doubts Francis’ sincerity and his commitment to modernizing the church. He instigated the synodal process urging an attitude of open discernment as the church tries to listen to the wisdom of the Spirit of the Universe.

However, mansplaining his attentiveness to women’s voices and boasting about making a few female bureaucratic appointments smacks of a patronizing attitude.

The male pat in the back approach is often resented in modern female culture.

Certainly, that is how former Irish President Mary McAleese reacted when she read the magazine interview. In a short email directed to the pope, she blasted Francis for “a ludicrous lack of knowledge and clarity,” adding in unnecessarily harsh language that he offered just “more unlikely misogynistic drivel.”

She rightly censured his faulty logic. He divides the world along gender lines and ascribes traditional characteristics to males and females.

Then through a wild illogical jump, he concludes that Christian theology requires that one of the sexes – males, of course – should exercise all the power in running the church. McAleese is correct in calling out “the utter impenetrability of the reasons you offered.”

The debate about women’s ordination has found a place in L’Osservatore Romano, the official Vatican newspaper. In response to Francis’ interview in America, Marinella Petroni, a retired professor of biblical theology at the Pontifical Atheneum in Rome wrote, “Doesn’t the Marian-Petrine principle express an ideology and rhetoric of sexual and gender differentiation that has now been exposed as one of the covers for patriarchal privilege.”

She went on to say that the masculine-feminine division of roles within the Catholic Church makes it difficult to sell a new construct that eulogizes women as somehow defining the church while all the power continues to reside with men who, like Francis, claim this is part of God’s design and master plan.

This new stress on the Marian-Petrine divisions is a reversal to old ways with no change in the outmoded ecclesial power structures. The worldwide synodal consultations plead for a new vision leading to an open door for women in all ministries.