Flynn, who still believes Donald Trump won the 2020 presidential election, has been vocal about his "Irish Catholic" upbringing in recent times. 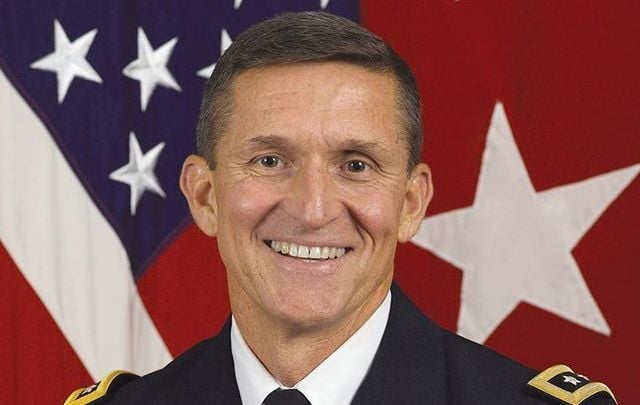 “Irish by Blood,” the t-shirt reads.  “American by Birth.  Patriot by Choice.”

A Celtic Cross about a foot tall, and nearly as wide, adorns the back of the same shirt.

This was about a year ago, in Phoenix, Arizona, where retired U.S. Army general Mike Flynn, who briefly served in the Trump administration, made an appearance, as part of the Reawaken America, um, tour.

The New York Times went with “conference,” describing the gathering as “a right-wing road show that combines elements of a tent revival, a trade fair, and a sci-fi convention.”

Burly, bearded men and the women who love them strolled about Phoenix’s Dream City Church. Attendees could purchase the Celtic “blood” shirts, though I’m not sure why they would. They seem at least as un-American to me as they are patriotic.

And patriotism is the point of all this.  As Flynn never stops reminding his followers.

Except, that is, when he’s reminding them that he’s Irish.

Flynn was one of nine children born into an Irish American military clan in Rhode Island.  His mother was an activist for pro-life and other Catholic causes.

Flynn has since taken up the theological baton, the Celtic Cross, if you will. And he’s running and running.

Last month, the PBS series Frontline debuted a new series on Flynn, who still thinks Donald Trump won the election in November 2020 and who still thinks nothing all that bad happened at the Capitol on January 6, 2021.

This is why it’s weird to see Flynn get upset when a reporter asks him if he considers himself a “Christian nationalist.”

Suddenly, this tireless advocate is struck so inarticulate by anger that supporters offer up a more suitable identity.

These days, Flynn would be better off going with “Christian Nationalist,” given the crowd he runs with.

Does Flynn really want to entertain questions about Pope Francis?

I’m sure he has some explanation. I’m sure Flynn would tell you that poor old Pope Benedict was cast aside by treachery. Just like poor old Donald Trump.  And that Francis is a fraud.

But it would still be interesting to hear exactly what part of his “Irish” identity Flynn most identifies with.  And how it fuels his, um, concerns. About America and the future.

“Since Trump’s departure from office, his Make America Great Again movement has reconstituted itself as a kind of shape-shifting but increasingly robust parallel political universe, one that holds significant sway over the Republican Party but is also beyond its control,” a New York Times Magazine profile of Flynn once noted.

In this “MAGA-centric” world, Flynn “is probably the single greatest draw besides Trump himself.”

In the recent Frontline documentary, it was fascinating to see older clips of Flynn railing against “Sharia law.”

It’s been a while since we heard that old classic, having been replaced by more current hits about stolen elections and Hunter Biden’s laptop.

But the “great replacement” is just a new version of that old Sharia law classic.

Flynn, the Irish Catholic, should know that better than anyone.

It was just a few years before Flynn was born that a best-selling author wrote about U.S. states like Rhode Island with large Irish Catholic populations.

Places that “afford a very interesting preview of the hypothetical Irish Catholic conquest of America – a preview which is quite horrifying to most spectators.”

The writer, named Paul Blanshard, went on to say, “Too often the Irish Catholics in America have lived, thought, voted, played, married and gone to school as Irish Catholics rather than as citizens of the United States.”

Can you imagine someone questioning your patriotism, General Flynn?  Perhaps you should try.

Was Freud right? Is psychoanalysis of no use to the Irish?