Unionists own the unrest, the Protocol, the broken Brexit promises

Arlene Foster, Northern Ireland's First Minister, has no doubt who's responsible for the loyalist mayhem and peace-threatening violence on the streets of Belfast this week: Sinn Féin. 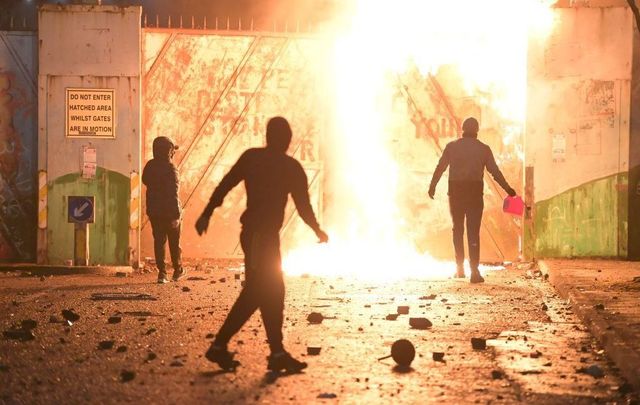 April 7, 2021: Fire fed by petrol burns as youths clashed at the Peace Gate at the Springfield Road/Lanark Way interface in Belfast. Violence broke out after a Loyalist protest, with youths attacking police officers and petrol-bombing a bus. Getty Images

Taking to Twitter on Wednesday, the DUP leader Arlene Foster groused that the shocking violence, that included a bus driver having a lit petrol bomb thrown at him, only served “to take the focus off the real lawbreakers in Sinn Féin.”

Excuse me? How are they the focus? When loyalists throw lit petrol bombs or set vehicles on fire are they not breaking the law entirely unaided? Is this some new form of ventriloquism or possession? Or is this a case of whataboutery from Foster that could define the term for this century in the Oxford English Dictionary?

In a photograph that captured the escalating danger of this moment and the tragic threat to a hard-won peace, a young man was pictured this week with a lit petrol bomb before a sign that reads “There is no good war or no bad peace.”

"There was never a good war or a bad peace."

If you remember it, or are haunted by it, your heart would nearly breaking.@presseyephoto https://t.co/1B1zBepcKx

Foster would do well to remember these wise words before she fans more flames with her incendiary and blame-shifting rhetoric. The trouble is coming from inside the loyalist community, so let her look to that – and her own leadership – before casting aspersions elsewhere.

Her reflexive need to blame Sinn Féin for everything that questions the quality of her own leadership is a reminder of just how much the steady rise of Sinn Féin is preoccupying the thoughts of party leaders north and south of the British border in Ireland.

A bad Brexit deal? Blame Sinn Féin. Another COVID cockup? Blame Sinn Féin. A bad year for the turnips? Sinn Féin. If there's one thing that unites the right in Ireland from Belfast to Dublin it's the threat of a progressive, left-wing politics that threatens to outflank them all.

This is not protest. This is vandalism and attempted murder. These actions do not represent unionism or loyalism. They are an embarrassment to Northern Ireland and only serve to take the focus off the real law breakers in Sinn Fein.
My thoughts are with the bus driver. https://t.co/2JRcOb6s8C

Foster has particular reason to feel abashed this week. Blindly embracing the English nationalist revolt that was Brexit, she saw herself and unionism as fellow travelers in the half-baked enterprise, a disastrous strategic mistake.

Giving no time and no quarter to Irish nationalist and republican objections, she pursued the Brexit chimera to its tragic end: the predicted and predictable betrayal by Boris Johnson and the Tory party that seems to want nothing more but cut the money pit North adrift. 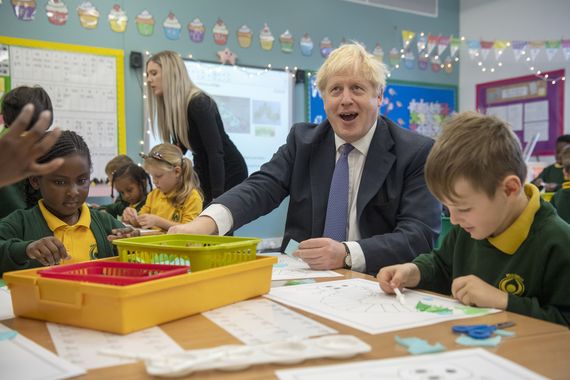 So why, it must be asked, would you give your undying loyalty to a country that pays you so little regard in return? The answer is complex but the dynamic between Ulster unionism and England more and more resembles an abusive, toxic marriage: one side professes its devotion as the other side cuts it adrift.

Meanwhile, kicking over the hornet's nest before an election that will either punish or reward the DUP for failing to protect the union (it's core mission) Foster and the former DUP leader Peter Robinson saber rattled in the press, warning their opponents to “take care” where their objections were leading them all.

To many critics, it seems clear that unionist leaders – with their unwise and contentious embrace of Brexit and their unwanted break with the European Union - have simply helped to foment the resurgent violence and unrest to cover up their own political failures.

It is a measure of that failure that no other route has presented itself to these finger-pointing unionist leaders than the bloody dead end of the Troubles era.

Very disturbing scenes tonight of violent attacks by Loyalist rioters in NI. All leaders with influence must speak out and unequivocally condemn this senseless violence. https://t.co/FJxicdyFOm