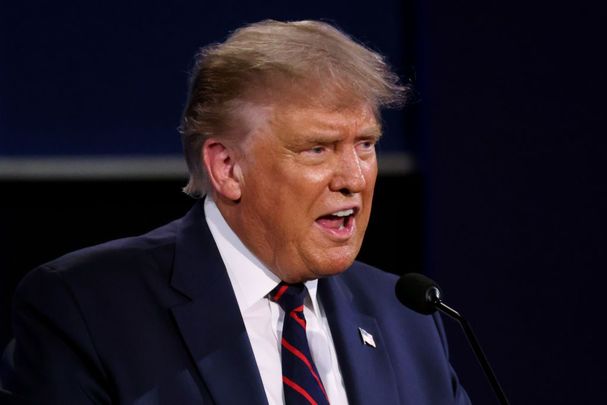 This was an "unleashed firehouse of lies, insults, scorn, aggression, and threats" but now, like an abuse victim, we're all used to it. This is not normal.

On Tuesday during the first presidential debate moderator Chris Wallace prefaced a question to President  Donald Trump with the following coddling words: “Mr. President, you’re going to be very happy because we’re now going to talk about law and order.”

It was an extraordinary utterance. Wallace is a seasoned journalist, it's not his job to concern himself with what makes politicians happy or unhappy, but there he was, literally begging his leave. It continued like this.

“You’ll be happy - sir, you’ll be happy I’m about to pick up on one of your points to ask the vice president,” Wallace said about 15-minutes into the debate, before asking Biden about the Affordable Care Act. He sounded like he was looking for a pat on the head.

So what was going on? Call it the drunken uncle at Thanksgiving impulse. We all learn to kowtow to the old bigot in the hope he'll stop yelling at everyone and normal life can resume.

It's an old, old story. Abusers train you to become hyper-vigilant about what sets them off. They spend years setting up all the complicated ground rules. You barely even notice how you have colluded in your own oppression until you notice there's a hell of a lot of things you can no longer do or say.

I suspect that many women and gay men in particular bristled at what they witnessed from Trump last night. NBC's Nicole Wallace, no relation, spelled it out after the debate: “President Trump acted as the abuser tonight, and Chris Wallace was among the abused,” she said. “Trump wasn’t debating; he was lifting his leg and peeing on democracy.”

Chris Wallace sounds like he’s begging. All the time.

These remarks get right to the heart of what we witnessed, an unleashed firehouse of lies, insults, scorn, aggression, and threats. It was the Greatest Hits of his lifelong grievances, the same old ones he's reheated for the last four years and it’s just so tired. It’s become meaningless. The jig is truly up.

So Trump's performance was shameful, unprecedented, and unpresidential, but not unexpected. He will never stop finding new lows to fall below.

Onstage he looked and sounded like he was ready to run a  used car lot, but not America. Vice President Biden had his work cut out to remain dignified facing this circus monkey throwing muck routine.

Abusers train you to become hyper-vigilant about what sets them off. They spend years setting the ground rules. You barely even notice they have set the rules about what you can and can not say. https://t.co/vmiCpNmeO9

It was painful to watch. Trump was a facsimile of the bigoted uncle that no one likes, the pub bore who can't bear to listen to others speak, the abuser who takes the most painful moments of your life and your deepest losses and turns them into opportunities to twist the knife, this was the monster that you spend every year after you flee from feeling relieved to have finally escaped.

Last night America got a good clear look at the man behind the presidential seal and we saw his cruelty, his humorlessness, his joylessness, his crudeness, and his unmistakable lovelessness.

And we all collectively shuddered. And we want nothing more to do with him. Depend on it.