Donald Trump announcing that he's running for President again would be a huge gift to Democrats after the midterm 'red wave' turned out to be a 'red mirage.' 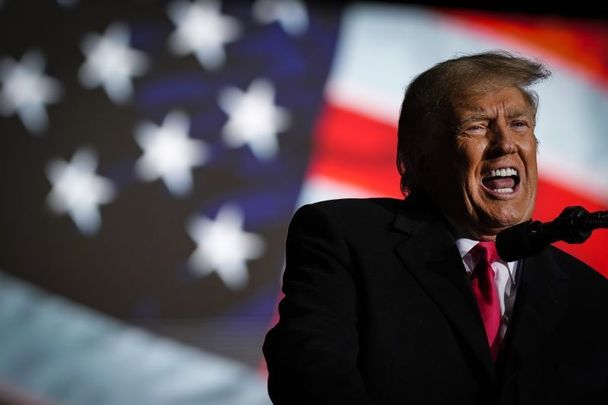 The biggest parting gift that Donald Trump could give America now is to announce his candidacy for president again.

It would be a gift to President Biden, who will once again beat him like a drum in any new match-up, but it would be an unintended gift to the wider nation too since the midterms have proved that America has finally gotten wise to this would-be authoritarian and his unmistakably anti-democratic grifts.

The only thing that could make another Trump presidential run even more favorable for Democrats at this point is the announcement that Elon Musk has volunteered to run his campaign.

“President Trump is going to announce on Tuesday that he is running for president and it's gonna be a very professional, very buttoned up announcement,” Miller told Bannon. ‘We did a run through this morning with the logistics team that some great folks that are on board.”

Put simply, Trump is political Kryptonite. By any yardstick, the recent midterms were historically bad for Republicans, who had laughably fallen for their own propaganda and anticipated a red wave - a red tsunami in fact.

Circumstances were certainly favorable. Biden's popularity was underwater, although his programs were well-received. Inflation had risen along with gas prices, things should have favored the GOP.

But it was a red mirage. The only red wave they saw turned on Tuesday out to be the ketchup-stained walls of Mar-a-Lago, where – as Cassidy Hutchinson's testimony recounted - Trump most likely recreated the epic tantrum she once witnessed, throwing another Heinz-filled tureen at the White House walls.

"There was ketchup dripping down the wall." Cassidy Hutchinson says then-President Donald Trump threw his lunch against a wall when he learned of an @AP article in which then-Attorney General William Barr said the DOJ had not found evidence of voter fraud. https://t.co/0WDFU8fj8E pic.twitter.com/A7LiiB8NAL

One would need a heart of stone not to laugh at the result of all his recent endorsements – just ask Mehmet Oz, Don Bolduc, Blake Masters, Kari Lake, and others.

It turns out that voters are immune to the siren call of MAGA extremism, election denialism, and minority bashing. It turns out armed insurrections seeking to overthrow the United States aren't popular.

It turns out young people don't support having their LGBT friends and family targeted and bashed by draconian bills and bigoted political pandering.

It turns out women don't appreciate having their long-settled right to choose unceremoniously stripped by GOP-appointed conservative justices.

It turns out that attacking modest student loan forgiveness but supporting eye-watering bailouts for Wall Street gets you noticed by young voters - and it turns out they'll vote you out.

Dark time in Trump's inner circle. Spoke to several longtime friends, donors, and aides in the past 24 hours. Many say he's listening to very few people, isolated, and meanspirited about his potential rivals. Several of them say they're tired of his rants and are avoiding him.

Claiming that he's the only wave that lifts all boats, in reality Trump's the hurricane that sinks them. But don't take my word for it, in fact, ignore my word. Rally around him once again.

It is lamentable that Trump stole the nation's most classified documents and took them to his minimum security golf resort.

It is lamentable that he incited an armed insurrection in which people were killed and the Vice President was threatened with hanging. So instead of running for president, I'd rather see him indicted.

But in the mean time I hope he will start his ill advised new presidential campaign  in the state of Georgia by also assisting – sorry cementing – the fate of Herschel Walker.

Then I hope he and his remaining supporters echo his increasingly sour attacks on Ron DeSanctimonious, Glenn Youngkin, and Mitch McConnell.