Trump's far-right supporters have come closer than they ever have before to seizing power, and they have been energized by the experience, not chastened. 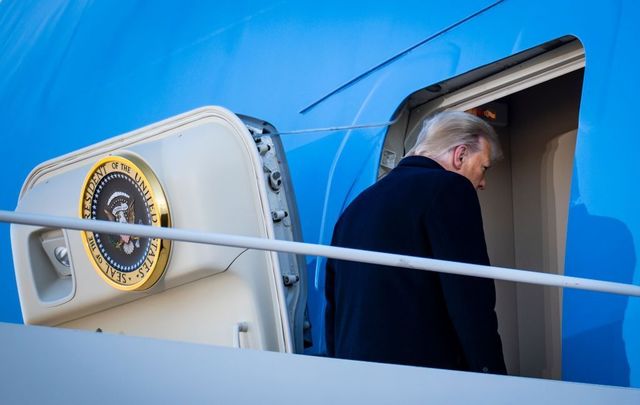 January 20, 2021: President Donald Trump at Joint Base Andrews before boarding Air Force One for his last time as President. Getty Images

This time last year the Trump administration was presiding over at least 150,000 deaths to Covid-19.

For ordinary Americans, the last year of the Trump administration was like watching a dress rehearsal for the end of their democracy and possibly the world. Trump knew the Covid-19 optics were “killing” him politically. He could see the writing on the wall.

By the end of August, 160,000 had Americans died from Covid and his disinterest in their plight was one of the most striking things about his one-term presidency.

On August 23, his strategy to resist the inevitable became clear. On that day, he warned that ballot drop boxes were a “voter security disaster” and a “big fraud,” where it is “possible for a person to vote multiple times.”

None of that was true, but it didn't matter, he was preparing his base to physically defy his inevitable electoral loss.

Seeing no way out but through, Trump was preparing them for the unthinkable, to take up arms against their democracy and their own nation to reverse the will of the people.

It was, and it should be forever known as, an attempted coup, historians say. One that General Mark Milley, the chairman of the Joint Chiefs of Staff, likened to the rise of Adolf Hitler, saying the president was preaching “the gospel of the Fuhrer” with his lies about the election being stolen.

Then in December, General Milley received a call from “an old friend” with an explicit warning that Trump and his allies were trying to “overturn the government.” Milley was confident the military wouldn’t go along with it.

General Milley had previously been alarmed by the number of white supremacist and Neo-Nazi groups that showed up at Trump's rallies, calling them “Brownshirts in the streets.”

Later, he compared the political atmosphere in the U.S. to Germany’s tottering Weimar Republic in the early 1930s. “This is a Reichstag moment,” he said, referring to the arson attack on Germany’s Parliament that Hitler used as a pretext to assume power and end democracy.

On January 6, 2021, the fascist attack he feared arrived. “These guys are Nazis, they’re boogaloo boys, they’re Proud Boys. These are the same people we fought in World War II,” he said a week after the terrorist attack on the Capitol.

These are not the words of some mid-level administration wonk, by the way, they're the words of the chairman of the Joint Chiefs of Staff. The danger that Trump placed the nation in – picking himself over democracy and using latter-day brownshirts to launch the attack – should give us all pause.

Has the Republican party learned the lesson of the final chaotic Trump year? The way they shifted from blaming him for fomenting the insurrection to sabotaging the bipartisan investigation into it is your answer.

So is the GOP's national campaign to “revise” voting rights, where initiatives like Georgia's new voter I.D. requirement for mail-in ballots could disenfranchise more than 270,000 Georgians lacking the necessary identification. (Biden carried the state in 2020 by less than 12,000 votes).

The plan is not to compete, but instead, to peel away votes through a series of new roadblocks for Democratic voters to ensure Republican majorities in perpetuity.

Meanwhile, Trump's far-right supporters have come closer than they ever have before to seizing power, however momentarily, and they have been energized by the experience, not chastened. All they need now is for a more plausible political successor to come and light the way. If the recent is past is prelude, they won't have long to wait.