Teresa Deevy, one of Ireland's most important female dramatists, short story writers, and writer for radio, died on January 19, 1963. 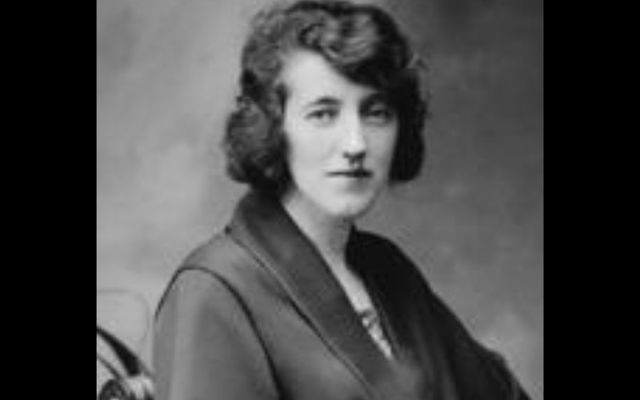 Editor’s Note: On January 19, 1963, Irish playwright Teresa Deevy passed away aged 69. The Waterford talent lost her hearing at a young age due to Ménière’s disease. Although it was not immediately obvious that the works of the dramatist, short story writer, and writer for radio were subversive, she often tackled the theme of the limited opportunities that the new state presented to Irish women.

When old, repressive systems like the former USSR collapse, among all the broken bottles and barbed wire you can often find whole libraries full of censored books. That image came to mind to me this week while considering two accomplished works by Irish playwright Teresa Deevy.

You probably haven’t heard of her. There’s a good reason for that.

Her most famous 1936 drama, "Katie Roche," paints a completely absorbing portrait of a spirited young Irish servant girl with a head full of daydreams of romance and glamour.

Because we now know what most often happened to spirited young girls with a head full of daydreams in the increasingly theocratic nation Ireland was becoming at the time, it’s hard to watch Deevy’s plays without fearing for her heroine’s future.

In the nation Deevy depicts, just one wrong step, one wrong word, can see a trap door open that you’ll fall through, perhaps never to be seen again. Your life, your future can change in an instant, before you notice what’s happened, and long before you get to have a say about it.

What’s heartrending to watch is how Katie’s desire to do something “grand” with her life instantly comes into conflict with the options Irish life is actually presenting her.

The choice for the women of her era, the playwright calmly reminds us, is marriage or the convent. Step outside of those narrow confines and you’ll discover quickly what happens to spirited girls and their daydreams.

Her one-act plays, "Within a Marble City" and "Eyes and No Eyes" confirm her status as a first-rate playwright, and they also confirm why she is unknown to most of us.

In "Within a Marble City," Deevy introduces us to a recognizably insular Irish community called Inishfree where a young woman, romantically taken with a handsome and ambitious young blow-in, takes a terrible risk and exposes herself to potential scandal to do what any young man can do without thinking -- make a romantic overture to the person she has become infatuated with.

Luckily for the young woman, the plot works out. But getting what you think you want can be the worst of all snares, she discovers.

Deevy gently reveals the young man’s arrogance and pomposity, his certainty that he’s carrying all the cards and that he’s been dealt a good hand.

What’s even more alarming is to watch the way fathers and sons decide the fate of their wives and daughters without their input. Marriages are arranged, dowries are debated, and futures and sealed without a word of protest. It’s the language of the cattle fair, and Deevy quietly outlines its individual consequences.

In "Eyes and No Eyes," the more accomplished offering of the evening, Deevy reminds us that the traps that most often open for women can sometimes open for men too. Especially if they are of an artistic bent, or given to philosophy, or to say things that startle others.

In Ireland, her play suggests, it would be better to have no eyes at all than to really see what’s going on all around you.

As you can imagine this kind of observation made her a target for the increasingly powerful Irish censors. Post-independent Ireland made gender politics the ground zero of its fight to maintain control over identity and consolidate its power.

Deevy still fascinates because she shines headlamps into the cozy shadows of Irish nationalism and challenges Irish authority at its source -- in the boardrooms, the barrooms, and the bedrooms. Not everyone wanted to be a comely maiden with her mind set on marriage, she reminds us.

For her trouble, for the trouble she was beginning to cause the establishment, Deevy had her later works rejected by Ernest Blythe at the Abbey Theatre. Her offending play "Wife to James Whelan" confronted the gulf between the earning power of men and women in the new Republic.

So, they did to her what they did to thousands of others. They banished her to a silent world from which it was presumed she would never reemerge. It has taken over 80 years, but she’s back.