The Shadow of Violence is a brutal new Irish western

The Shadow of Violence is a good man turned bad tale that's coming to the big screen this month. 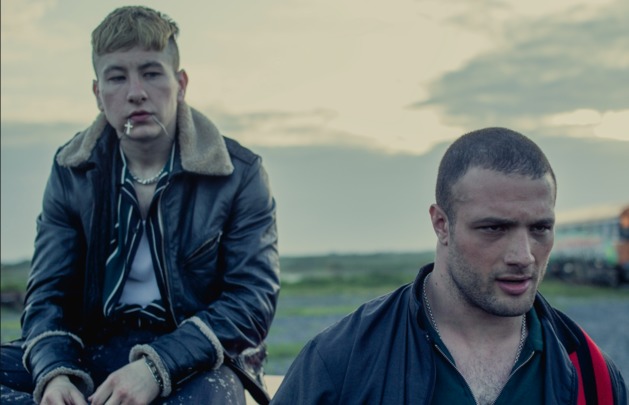 Barry Keoghan and Cosmo Jarvis in The Shadow of Violence. Saban Films

The Shadow of Violence is a western-like setup and it was actually filmed in Ireland's west, with dramatic results.

Ireland has proved very fertile ground for one of the most familiar of film genres, the western. One good man cowboy films minus the hat and cattle like "The Guard" and "Calvary" have played well here in recent years and now along comes "The Shadow of Violence," which tells the story of a hired gun who has to decide where his loyalties lie.

The hired gun in question this time is actor Cosmo Jarvis, a millennial Marlon Brando, who plays a character literally called Arm, as in the arm of the Irish criminal enterprise he works for, a man you would not want to get on the wrong side of.

This being a crime and redemption story of course you do see the wrong side of him, right from the first scene, where he is sent to punish a local man for the sin of being late with his loanshark repayment plan.

It's a measure of newcomer Jarvis' skill as an actor that we still have any sympathy for him after this brutal altercation because we soon learn that wouldn't you know he's actually a man more sinned against than sinning.

Read more: Irish movie “How to Fall in Love in a Pandemic” gets Oscar nod

Arm, who looks like he may well be on the autism spectrum and who has a son who actually is, is hired and in a very real sense controlled by Dympna (Barry Keoghan) the younger hood who heads up the notorious Devers clan, who are feared throughout the local estates as criminal kingpins.

Keoghan is effortlessly believable as a sinister thug who pretends to care for his hired muscle but is actually ruthlessly exploiting him. What's even more remarkable is that you buy this "Of Mice And Men" set up, where the more physically imposing man is actually controlled by the smaller one with the stronger will. 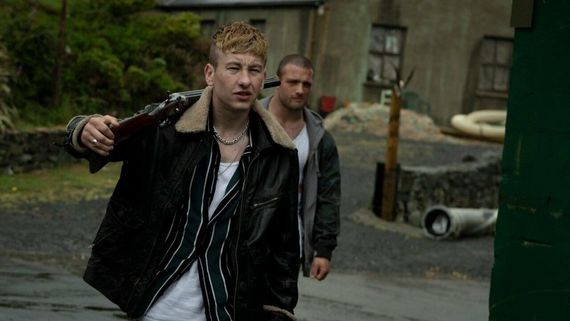 Barry Keoghan and Cosmo Jarvis in The Shadow of Violence

It's a reputation making turn for newcomer Jarvis however, who has the bruised warrior look of someone who can't make his life cohere the way that he wants. Having broken up with his ex-girlfriend Ursula (Niamh Algar) after a failed relationship that has produced their autistic son, he's in what they call a bad place.

We learn that he has once been a professional boxer and a gifted one but that dream ended with a fatal knockout that sent his career and his life into free fall.

Now he's just the Devers family enforcer, a man who is so numb to life that he doesn't care who he hurts himself, or indeed that he actually is hurting himself.

Read more: "The Irishman" is among Netflix’s most popular movies to date

The film is based on the short story "Young Skins" from a collection by Irish writer Colin Barrett and to be honest at key points it looks and sounds like it because exposition is sometimes read aloud, as though the director doesn't quite trust himself or his actors at key moments.

But the screen chemistry between Jarvis and Keoghan and Algar pulls you in and makes you care about Arm and the awkward but well-intentioned way he is trying to be the best version of himself, or at least show up for his ex and their child. 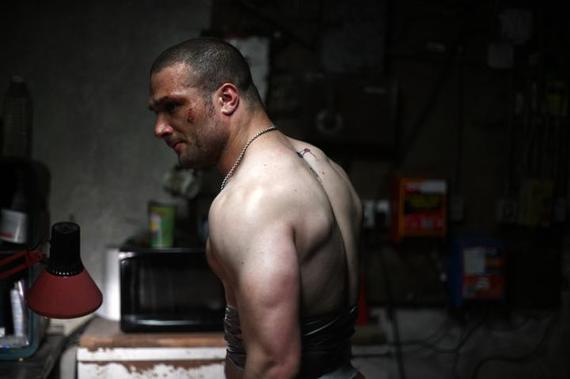 Cosmo Jarvis as Arm in The Shadow of Violence

The structure of the film is surprisingly straight forward, call it a rural Irish cowboy gangster gothic, an increasingly familiar form. The Devers look like they have stepped out of John Boorman's Deliverance by way of Connemara, and frankly, the film lays the southern Irish gothic style a bit thick, in almost every sense of the word.

As Paudi, the psychopath brother in the Devers matching catalog of rustic ghouls, Ned Dennehy is so diverting that he almost inhabits his own film. In fact, he's so threatening from his first scene that he has denouement written on his forehead.

Barry Keoghan is dependably brilliant as ever, I have never seen him flub a role, but his character feels a little underwritten here. What does he want, what does he learn about himself, what kind of person is he underneath the cold surface, we don't really learn by the end of the film and he feels softly written out as Arm's struggles takes the main stage.

What you make of these gangster shoot 'em ups in sublime country landscapes and tiny villages is a question for yourselves. The scale of the violence and way the direction builds character sometimes strain credulity, and the appendage waving antics of the snarling men don't help. 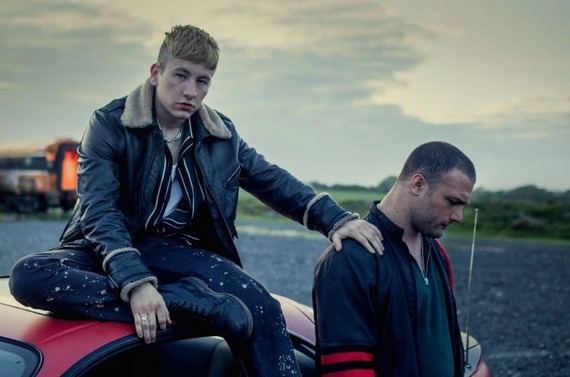 Barry Keoghan and Cosmo Jarvis in The Shadow of Violence

"Your daddy would be turning in his grave if he could see you,” barks Hector (David Wilmot) in a scene where he is encouraging Dympna to take a more violent path than he has yet dared. This kind of shaming is supposed to strengthen Dympna's resolve but it ends up creating eye rolls. We have seen this kind of macho taunting in a million other films and its hackneyed scenes like this that let the air out of the central storyline.

What saves the film isn't the script, it's the acting and directing. "The Shadow of Violence" looks like it's going to be a fairly straightforward moral tale of decision and consequence but instead it becomes about being trapped in a world you didn't create and can't escape, which is altogether more absorbing.

Jarvis is terrific as the out of his depth enforcer who is increasingly recoiling at the pathetically small-time hoods that he has surrounded himself with. Unfortunately, they are noticing that he's stepping out of line too. 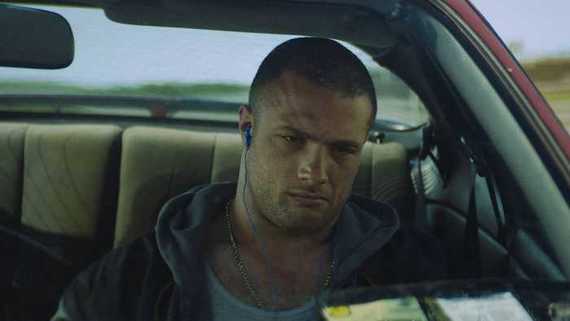 Cosmo Jarvis as Arm in The Shadow of Violence

Niamh Algar makes a strong impression as Arm's long-suffering ex, elevating what could be an overly familiar role by giving it real depth and dimension. She's aware of Arm's failings but she remembers his strength too and it's her voice that pulls him back from the disasters he's being led toward.

The film was scheduled for release just as the coronavirus was upending the entire world's plans, immediately affecting its release date here in the U.S. But remarkably the film will now screen only in theaters here from July 31. That seems like wishful thinking at the point but it's the decision that's been made by the studio behind the film.

It would be a shame if this independent film starring breakthrough talent and a first time director does not achieve the attention it deserves because of this disruptively terrible era we are all currently living in. "The Shadow of Violence" deserves to be seen and as an Irish action film, it has broad crossover appeal.

But it's Jarvis' heartbroken performance as a good man soiled by the brutality all around him that will linger in the mind. Raised in England but of Armenian heritage, his Galway accent is as authentic as the inner turmoil he brings to the screen. It's rare to witness an actor take such a deep dive into this kind of material and it makes the film as rewarding as it is.

Arm has to decide where his loyalties lie as much as we the audience do. Is he worth saving? Can he be saved? Is it too late for him? That Jarvis makes you care as much as you will do is a tribute to his breakthrough performance.