For the first time ever in the history of the United States of America, the Supreme Court removed a long-settled right, they removed a freedom, they did not protect or expand one. 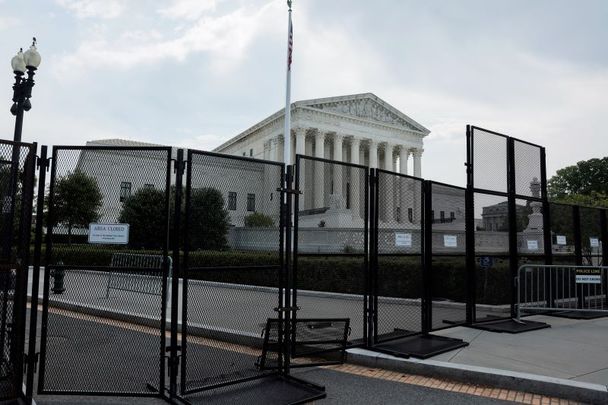 When the conservative-heavy Supreme Court overturned Roe V Wade, the 1973 ruling that legalized abortion, on Friday, it was not a surprise, although it is still a breathtakingly radical ruling. 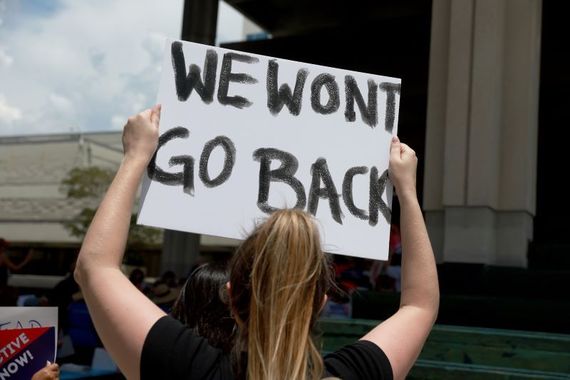 May 7, 2022: Abortion-rights supporters rally in Fort Lauderdale, Florida. A leaked draft opinion by Supreme Court Justice Samuel Alito has suggested that the Court is poised to overturn Roe v. Wade, the landmark 1973 ruling that created a constitutional right to abortion. (Getty Images)

For the first time ever in the history of the United States of America, the Supreme Court removed a long-settled right, they removed a freedom, they did not protect or expand one.

If the Republican Party thinks that you cannot be trusted to control your own reproductive choices, if instead conservative politicians and conservative judges will make those life-changing personal decisions for you,  if they threaten to charge you with a felony for even daring to take control of it yourself, are you still an adult human woman now or something to be manipulated and controlled, like livestock?

Some conservatives disingenuously claim the court's ruling now sends abortion rights back to the states, whilst knowing full well that so many of these states have draconian laws on the books to criminalize and end all abortion procedures immediately (as indeed has just happened).

As of late June 28, 10 states have totally banned abortion or have 6-week bans, and more states will follow in the days to come. Find the latest policies in effect across the nation in our updated interactive map.
🔗 https://t.co/mQ1cnvDeES #BansOffOurBodies #RoeVWade pic.twitter.com/gvpyQbVR9W

Meanwhile, there is no suspense at all in what this conservative court plans to do next because, in the June 24 ruling, Justice Clarence Thomas explicitly tells us: “In future cases, we should reconsider all of this Court's substantive due process precedents, including Griswold, Lawrence, and Obergefell."

What this means is that he is recommending outlawing contraceptives, LGBT marriage, and he is even suggesting re-criminalizing being LGBT itself. It's as if every cultural advance of the past 50 years is soon to be overturned by the rulings of this rogue court. 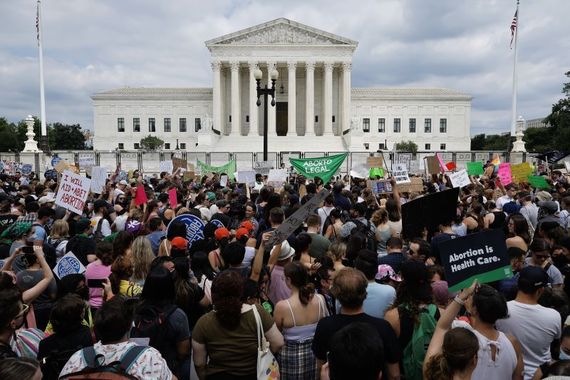 What this also means is the Supreme Court has now become the Supremacy Court, because its stated mission now is to function as a rubber stamp for turning straight white conservative male grievances into federal law, so no constitutional right will ever be safe again as long as there is another conservative grudge to be remedied by this kind of aggressive judicial fiat.

Look, maths was never my strong point, but even I know that when 58 percent of the public support leaving Roe V Wade as it is, and 32 percent of the public wants it overturned - and then when the Supreme Court dramatically rules in favor of the minority view - that's not democracy in action, nor is it any kind of justice.

It was telling that Justice Thomas left one due-process ruling, Loving V Virginia, off his shopping list of gotchas. That famous case legalized interracial marriage in the US and Thomas, a Black man, is famously married to Ginny Thomas, a white female coup plotter and ardent anti-democratic insurrectionist.

To wit, the law permitting interracial marriage is a right that Thomas personally depends upon, so he left it conspicuously off his shopping list of pending cultural smackdowns. His hypocrisy is as clear as his contempt, in other words. And, indeed, why is he still on the bench when his own wife ceaselessly agitated to overthrow our last presidential election?

Only one part of this lamentable ruling truly does surprise me. Taking away the long-settled rights and legal equality of about half the people in the United States of America with just one court ruling takes courage. It is a truly breathtaking act of hubris and chutzpah, it shows us just how resentful the conservative minority has always been of these basic freedoms all along.

These conservative justices and the party that seated them know there will be a historic backlash in November that will probably sweep away any projected Republican victory. Yet still, they could not help themselves. Their political sense was overwhelmed by their resentment.

Thanks to this rogue court, white conservative women who still vote for the GOP this election cycle will no longer have a fig leaf of plausibility to hide behind. They will not be able to claim they are concerned with protecting women's rights whilst elevating the party that gutted them.

Peggy Noonan was openly laughed at on Meet The Press on Sunday when she suggested the Republican Party should use this radical ruling to improve its standing with women.

The entire "Meet the Press" panel laughed out loud at Peggy Noonan today when she said the GOP "should become a party that helps women" after its abortion "victory." pic.twitter.com/uSth0nkutC

There will be no suspense about what happens next. 32 percent dictating the lives, futures, and rights of the 58 percent, if it continues, will simply tear this country apart. Indeed it already has. The danger is clear and present and the wounds are deepening.

And if this back-to-the-future series of reactionary rulings keeps up, then very soon, none of us will recognize the place at all.