New Irish films to check out this fall

Yes, we're still in a pandemic, but no culture doesn't stop. 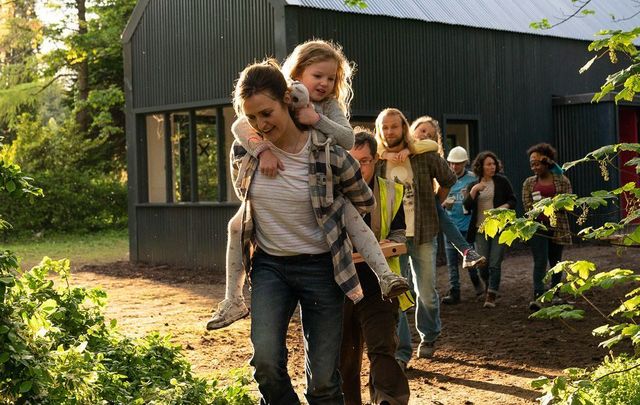 Three new Irish made films, Vivarium, Herself and Phil Lynott: Songs For While I’m Away, to check out in the weeks ahead.

Irish horror has a very respectable pedigree. "Dracula" was given to the world by the Dubliner Bram Stoker and other Irish writers like J. Sheridan Le Fanu and Oscar Wilde have left their indelible marks on the genre.

But this week the most famous horror writer alive, Stephen King, has lauded a new Irish horror film called "Vivarium," which is currently available in on-demand services like YouTube.

Starring Jesse Eisenberg and Imogen Poots as Tom and Gemma, a young couple who are looking for the perfect home, things take a turn when a strange real-estate agent takes them to a place he calls Yonder, a mysterious suburban neighborhood of identical houses, which poor Tom and Gemma can't leave quick enough.

Wouldn't you know, when they try to exit the labyrinth-like housing development, each road takes them back to the place where they started from. Soon, they realize that their search for a dream home has plunged them into a terrifying nightmare.

Although "Vivarium" looks and sounds like a straightforward Hollywood horror, its Irish roots are unmistakable. Directed by Lorcan Finnegan, from a story by Finnegan and his Irish writing partner Garret Shanley, it impressed King to the point where he had to tweet about it.

“Vivarium blew me away,” he wrote. “Rich and strange. If you love it, thank me. If you hate it, don't blame me.”

Irish screen horror has been having a moment lately with films "The Hole In The Ground," by director Lee Cronin also serving up memorable chills (the show is now available to watch on Netflix).

WATCH: Colin Farrell is unrecognizable as Penguin in "The Batman" trailer

These are hard times, what with the pandemic and the resultant loss of economic and social stability, so it's good to see films that tackle head-on issues that affect many now: economic struggle, parenthood, and how to raise kids in a world gone mad.

"Herself" is written by and stars Clare Dunne and was celebrated as one of the standout films at its world premiere at the Sundance Film Festival in January (Dunne later received the Discovery Award at the Virgin Media Dublin International Film Festival).

Directed by "Mamma Mia!" and "The Iron Lady" director Phyllida Lloyd, the film follows Sandra, a single mother, who is trying to build her own home. Inspired by a real-life friend of Dunne's who had to leave her rented accommodation with her children and move back home.

"Herself,"written by and starring Clare Dunne, was a standout at Sundance

“It's feel-good but with a definite reality bite,”  Dunne told the press. “It's what they call a dramedy, I think - the technical term!”

Sandra, beginning the film living in temporary accommodation, is uncertain if she's ever going to move on or have a home of her own. “Something happens in the movie where she goes, “I'm going to look up self-building.” She finds an eco-design online that is available to download yourself and she begins building.

“It's fiction, but it's based on fact. I googled self-build cheap Ireland and found architect Dominic Stevens design online for free. Dominic has been a vital part of making the movie; he was the first person I met for my research. It's a hero's tale and a redemptive one at that. Full of hope."

Sounds like just the thing for anxious times. "Herself" is slated to release in October.

Phil Lynott: Songs For While I’m Away

Before there was U2 there was Thin Lizzy. Phil Lynott, the late lead singer, would have been 71 this month but instead, he will remain forever 36 (he died in 1986, from complications due to a drug dependency).

"Phil Lynott: Songs For While I’m Away" is a feature documentary on his life and music. It's an extraordinary tale. A young black boy from working-class 1950’s Dublin somehow rises to become Ireland’s greatest rock and roll star as the lead singer of Thin Lizzy. Lynott was its elusive songwriter, a dreamer who enchanted people with his wit and style.

The new documentary is told through the words of Lynott himself and it tells the story of some of his most iconic songs too, in its attempts to get to grips with him as father, husband, friend, lover, and groundbreaking Irish rock star.

"Phil Lynott: Songs For While I’m Away" will be released later in the fall.