A full Irish embrace into the community and the lifting of the St. Patrick’s Day parade bans. 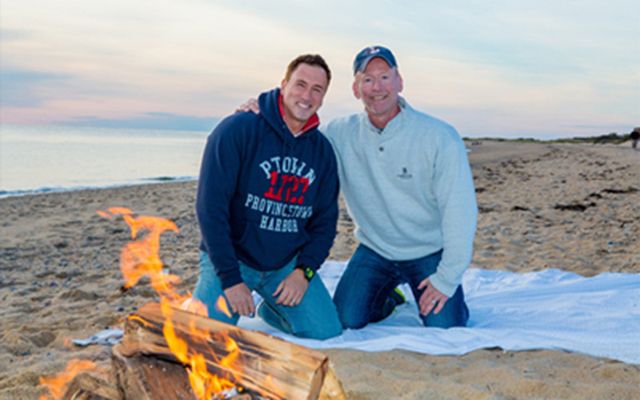 Growing up in the hardscrabble neighborhood of Southie in Boston in the 1960s, Patrick Flaherty thought he had everything.

His Irish grandparents and all his aunts and uncles lived close by. In summer, they would sit outside on their stoops at night and tell stories, he remembers. There was so much laughter growing up.

It was like being in Ireland, he thought. People were so close. It was such a strong community.

But something took him out of it. When Patrick figured out he was gay, he knew exactly what that meant in his tight-knit community: rejection or exile. He would eventually have to choose.

Patrick’s grandparents had hailed from County Cork and Galway. Years earlier they had landed in South Boston, which is trendy nowadays but when he was growing up it was a very poor Irish Catholic suburb.

“I was one of seven kids, a big Irish Catholic family,” he tells IrishCentral. “The whole street was an enclave. Two blocks down from us was the church. I remember long summer nights sitting outside. The house was full of life and always full. It wasn’t money that was driving things.”

Flaherty’s father died when he was nine leaving his mother to raise all seven children, which she set about with fierce determination. “Everyone pitched in – the aunts, the uncles. She was able to do it even with his passing.”

What brought Patrick to New York was his interest in theater and acting, but he was also drawn by the unspoken promise of being accepted for who he was. “Going there as a gay man was exciting. There were so many people like you. That diversity was exciting,” he says.

But his storyline was a classic gay one. To find himself he would be to leave everything he’d known behind. At the time, Irish America just wouldn’t make room for him.

Growing up in Southie there had only been just one place close to home that Flaherty could be himself in. It was just an hour and a half ferry ride away from Boston but a world apart: Provincetown, Massachusetts on the very edge of Cape Cod, a freewheeling, gay-friendly, naturally beautiful do your own thing vacation town. Unsurprisingly it became his home away from home.

“We have been coming here since we were teenagers,” says Flaherty, referring to himself and his husband John Jay Wooldridge (they made their home in Provincetown full time in 2010, where they also now run the successful and award-winning Inn at Cook Street).

“As a young man, I came here to find myself in my late 20’s,” says Wooldridge. “I came out really late because of my sports background. It was a haven for me to become a gay man.”

“I remember coming here as a teenager,” says Flaherty. “Just the fact that you could be surrounded by so many people. You felt so accepted. This town was at the forefront of experimental theatre and art, very similar to what you’d see in New York.”

The only difference they have seen over time is the increasingly accepting attitudes of the heterosexual visitors to the town.

When the ban on LGBT Irish marching in the St. Pat’s Parades in Boston and New York finally lifted, and when the 2015 supreme court ruling was handed down, many LGBT Irish Americans began to feel like a new understanding had been reached. A longtime wrong was finally being righted.

“I see a big change,” says Flaherty. “At my mother’s funeral, a couple of years ago my father’s aunts were there and they are religious Irish women. Now they’re all in their 80s, and are wonderful strong women.”

One of Flaherty’s aunts whom he always thought was very religious came up to Wooldridge after the service and said, “I just want to let you know that Mary (Patrick’s mother) said wonderful, wonderful things about you. And if Mary said that then I believe it and I wish you both all the best.”

Wooldridge adds: “We had no idea how she was going to react to me or to Patrick. They hadn’t seen us in a long time and it was questionable what was going to happen, but they were so accepting.”

“It was the full Irish embrace. It was amazing,” says Patrick. “We talked about it for days after. This was the aunt who really ruled the roost. When she made that statement that was it for everyone, it was law.”

Sometimes the fear is really in your own head, Flaherty continues. “You assume they won’t give you any time because they’re all tied to the Church. But I have seen a full embrace by my relatives.”

For Flaherty, that change can’t be understated. Now he has let go of the fear of rejection. Not only that, in recent years his Irish cousins have come to Provincetown and have had a blast. “They told me they don’t know why they didn’t come before. They have so much fun here. They find it so out of the box. It’s so different to them.”

And how did they end up as Innkeepers? “It was not even in the stars,” says Wooldridge. “Our friends ran an inn that we came to here together over 26 years and it and they became very special to us – in fact, they married us.”

He continues: “I had had enough of New York before Patrick and I eventually decided to move here. We weren’t ready to retire so we said what about a small guest house?”

“You’ll laugh at this,” continues Flaherty. “I always say it was destiny. Once we acquired the property I walked around the grounds and found a Celtic Cross in the garden. I told John that’s a sign! It’s staying there.”

It turns out they had a gift for it. The Inn at Cook Street is a roomy, brilliantly run, award-winning inn now that annually wins Best of the Cape prizes for its welcome, design, and excellence in customer service.

The Inn at Cook Street, in PTown, Cape Cod.

Located on a breathtaking street that seems designed by fate to appeal to artists, it’s the perfect getaway for in-the-know vacationers to 'PTown.'

But what you might not know is that the Irishman who runs it with his partner has an interesting story to tell about finding his way, away from and then back toward the full embrace of his Irish American family.

He doesn’t have to choose between them anymore. They're as welcome here now as anyone. And that’s new. And that's how he knows the times really are changing.