Curator Christine McCarthy talks about "A Centennial Celebration" of JFK in Hyannis – an unmissable new exhibition in Provincetown. 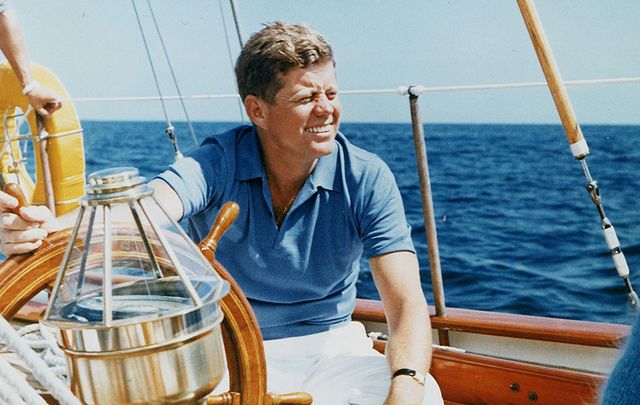 It’s the centennial of President John F. Kennedy’s birth, and this month an exciting new exhibition in Provincetown, Massachusetts is celebrating his legacy and his deep attachment to the Cape Cod peninsula, a place that is now synonymous with the Kennedy family. Cahir O'Doherty talks to curator Christine McCarthy about JFK 100: A Centennial Celebration and is surprised and moved by this unmissable exhibition.

Cape Cod and the Kennedy family compound in Hyannis Port have achieved a near mythic stature in U.S. history. It was the original summer White House, a place where the famous Irish American family vacationed in good times and bad, and it functioned as a welcome retreat from the national stage.

“I always come back to the Cape and walk the beach when I have tough decisions to make,” wrote JFK. “The Cape is the one place I can think and be alone.”

This month the life and legacy of the 35th president of the United States is being commemorated on the Cape itself in 'JFK 100: A Centennial Celebration,' an unmissable new exhibition at PAAM (Provincetown Art Association and Museum).

A collaboration with the John F. Kennedy Hyannis Museum and the Edward M. Kennedy Institute in conjunction with the 100th anniversary of President John F. Kennedy’s birth, the pride the peninsula takes in its most famous son is quite unmistakable from the moment you enter the new exhibit.

PAAM executive director and curator of the exhibit Christine McCarthy is clear about the main impulses that guided the collaboration. “Who doesn’t love the Kennedys?” she told our sister publication the Irish Voice. “And I thought it would draw some new people to town.”

That it is doing. For those who don’t know, Provincetown is located at the very tip of Cape Cod, just a 90 minute fast ferry from Boston. It has been a haven for artists, the gay community and every kind of counter-cultural movement for at least a century.

Provincetown is a small coastal resort of about 3,000 people, whose numbers swell to upward of 60,000 during the busy summer months, this year PAAM is rolling out the welcome mat to Irish and Irish American visitors by celebrating the life and legacy of the most celebrated Irish American of all time.

The first thing you will see as you walk through the museum doors is the iconic black and white photograph of JFK and his younger brother Robert huddled together in deep discussion, their bond never more apparent.

John F Kennedy and his brother Robert huddled in conversation.

Jacques Lowe took the photograph on July 14, 1960, the day after JFK received the Democratic presidential nomination, sealing his fate. Looking at it in person is an unexpectedly moving experience, all the more so for being the first thing you see.

It’s a heady thing to stand and contemplate the fates of this Irish American family who have known more than their share of misfortune.

“This show has a lot of the family, it’s not just JFK,” McCarthy explains. “Here, for example, is a portrait of JFK Jr. from 2005 by Cape Cod artist Shelby Leyton,” McCarthy says, pointing to a particularly vivid portrait.

In Leyton’s vivid portrait she magically captures JFK Jr.’s intelligence and charisma, as well as his curious elusiveness, which makes the tragedy of his fate all the more moving too.

For all their achievements and wealth, there is an unmistakable note of yearning that ties the Kennedys to each other, and that is sometimes captured in these remarkable exhibition pieces.

Partly it’s from our knowledge of the horror that befell them; partly it’s from having to live their public and private lives in its endless aftermath. To us it’s near legend; to them it’s their folks.

A poem by the then 10-year-old Caroline Kennedy has the power to stop a viewer in their tracks. Written in a child’s looping script, it’s dedicated to her grandmother Rose and it celebrates her grandfather Joe Kennedy Sr., who had by then developed aphasia and lost the power of speech.

In pride of place is a Jamie Wyeth lithograph of JFK on his adored sailboat the Victura, which the family originally purchased in 1932 and which quickly became an important and enduring part of their lives.

Sailing was a skill that brought the family together, McCarthy writes in the foreword to the exhibition.  It taught them teamwork, perseverance and competition, lessons that later permeated their public service.

Some viewers (and I raise my own hand here) will be surprised to learn that Senator Ted Kennedy took up painting himself in later years, and one of his watercolors of a sailboat from 2005 is on display in the exhibition.

“Ted was an artist, who knew that?” laughs McCarthy, who admits to being Italian and one-quarter Irish (more so now her nonna is not here to scold her). “I was surprised to hear that myself. The picture here is of his boat The Mya. I thought it would be fun to include that.”

Since Provincetown is filled with theater designers, interior designers and fashion designers of all stripes, McCarthy has decided to include some of the papers of Robert Luddington, the interior designer to the Kennedy White House, the Hyannis Port house and the apartment that JFK lived in with his wife Jackie before he was president.

“These are some of the notes and receipts for the furniture for the apartment he lived in before he became president,” McCarthy explains. “Jackie’s notes to him always insist that he get the cheapest one of whatever he suggests.”

Perhaps she had an eye on bad press, fearing too much obvious luxury would be a cause for criticism. How times change.

The Kennedys were the ultimate Cape Cop family and yet in a way – being Irish – they were not too. Sixty percent of JFK’s neighbors on Cape Cod voted for Nixon after all.

“You would think Cape Cod is a Democratic stronghold, but up the Cape there were Trump signs on people’s lawns from Orleans to Bourne,” McCarthy says.

There were a lot of scandals in the Kennedy family, and that was a contributing factor to the coolness with which they were greeted in parts of the peninsula.

Some of the cold response to the Kennedys also stemmed from their remoteness. “You can see the compound from the road in Hyannis Port, but you are not allowed to approach it,” McCarthy shrugs.

Meanwhile, the idea for the JFK centennial is to have commemorations along the Cape all the way to Provincetown. People love the Kennedys and they respond in particular to the letters, seeing Jackie’s handwriting, she says.

“There is a depressing part of this too. After you’ve been here you can walk out and think, compared to what we have now, please let’s go back to this,” McCarthy says.

“KENNEDY FOR PRESIDENT” reads the famous red white and blue election poster on display. Above it are the words, A Time for Greatness.

“What the Kennedys represent in Provincetown and this side of the Cape is inspiration. That’s what Provincetown is all about too. People have been coming here to paint (and to live more freely) for 100 years and the light and the landscape haven’t changed that much,” McCarthy says.

“For JFK, Cape Cod was the one place where he could be alone and walk on the beach and think about the decisions he had to make. This was a safe haven for him. It’s very tranquil here even on blustery days.”

Being able to walk on the beach here alone is a privilege he appreciated, as well as the Cape’s breathtaking beauty and the ample opportunities to go sailing she says.

“The Victura is now on the front lawn of the Kennedy Library,” she adds, with a curator’s eye for metaphor.

This timely exhibition reminds us that to truly understand JFK you need to understand how deep his connection with the Cape peninsula actually was. 'JFK 100: A Centennial Celebration' successfully restores that link, and it does it in the place he was happiest, which makes it worth the trip to Provincetown in itself.

The exhibit is on display at the Provincetown Art Association and Museum through September 4.