It's the first centenary of the Irish state and our politicians, artists and writers are busy reassessing where we've been – and where we're likely going. 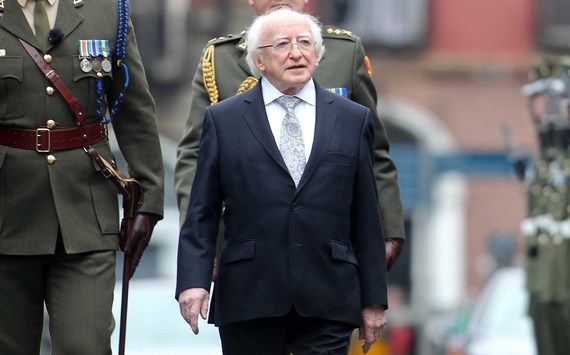 The Irish presidency is a reflection of the nation itself and now a book of handpicked letters to each of the many occupants of Áras an Uachtaráin (the Irish House of the President) titled 'The Presidents Letters,' shows us just how much our country has changed over time.

It's the first centenary of the Irish state and our politicians, artists and writers are busy reassessing where we've been – and where we're likely going.

An absorbing new book edited by noted journalist Flor MacCarthy titled 'The President's Letters: An Unexpected History of Ireland,' richly adds to that discussion by helping to make an important aspect of our history public for the first time. 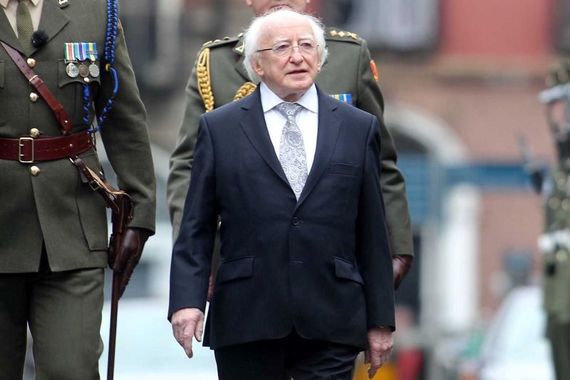 It was curiosity that drove her, she admits. What kind of people wrote to the various president of Ireland over the decades she wondered, and what did they write about? Where are those letters now? Do we even have access to them? And what's in them? Thinking about it, she was hooked – and you'll be too.

The Irish President is the national figurehead but that figurehead has changed dramatically over the years - dramatically so with the election of Mary Robinson. So is the story of who we are as a people increasingly contained in who becomes our president?

“Oh, totally. It's a backstage pass to Irish history and you can easily see all the changes. The language used in the early days of our presidency was so formal, for example. Our first president was Douglas Hyde and the language used then was your most esteemed excellency.”

“But more recently, in current president Michael D. Higgins correspondence, about fifty percent of it these days is done by email and some of those emails now start with “Hey, Prez,” MacCarthy laughs.

In between, you've got presidents who pushed the boundaries of the office in their own way and stamped their own personality on things.

“That's why in the book there's a huge array of correspondence from world figures, heads of state, royalty, poets, actors, Nobel Prize winners. You can see a history of Ireland in all that too.” 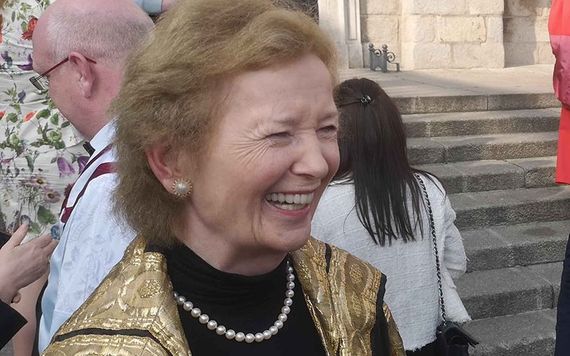 Alongside the letters MacCarthy unearthed a blacklist – yes, there was one. “We had the Secretary-General at Áras an Uachtaráin discover it for us. And not only has it never been published before, nobody knew it existed."

"And the names on it are fascinating, including names from the Irish revolutionary period or from the world of arts and culture, including people like Maude Gonne, the poet Patrick Kavanagh and others.”

Gonne, the target of W.B. Yeats's unrequited affection, was ceremoniously blacklisted by her old friend President Douglas Hyde. They had been close but she objected to a bill that he was passing in 1940 and dismissed him with a letter dripping with disdain saying, “I can't set foot in your residence while you're acting in such a manner.”

That condescension got under Hyde's skin and he had her banned from future events. “I thought that was just really great fun to read about, the very formal way that he set about banning her,” MacCarthy continues.

Poet Kavanagh saw himself banned for the mortal sin of daring to wear open-toed sandals without socks - and a green woolen jumper - to a social event at the Áras. “As Joe O'Connor remarks in his chapter of the book, surely it would have been a worse faux pas to wear sandals with socks?” MacCarthy laughs. 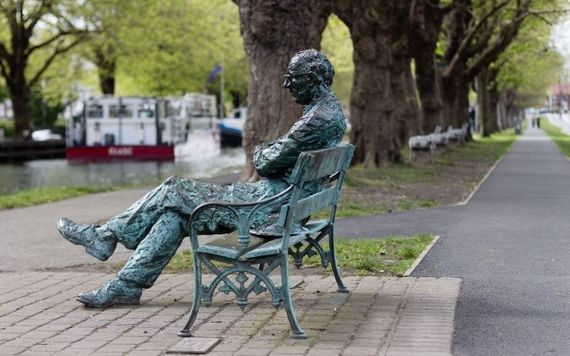 One of the letters that stops you in your tracks is a heartfelt poem submitted to then-president Mary McAleese by a 12-year-old Buncrana schoolboy called Sean McLaughlin.

“This is this is an incredibly poignant entry in the book,” MacCarthy says. “We had to get in touch with Sean's parents for permission to reproduce his poem and they said, “please tell the world about him.”

Sean McLaughlin was just 12 in the summer of 1998. In June “the very excited little fellow” paid a visit to Áras an Uachtaráin with some of his classmates from Buncrana. As a gift for president McAleese, he and a few of his friends had penned a poem inspired by her presidential theme, which was building bridges.

The kids wrote, “Orange and green, it doesn't matter until now. Don't shatter our dream, scatter the seeds of peace over our land. So we can travel hand in hand across the bridge of hope.”

Six weeks after his visit Sean was blown up by the Real IRA's notorious Omagh bomb and McAleese attended Sean's funeral. He had been killed alongside two other Irish children (aged 8 and 12) and two Spanish students (aged 11 and 23) who had been learning English in the town at the time. 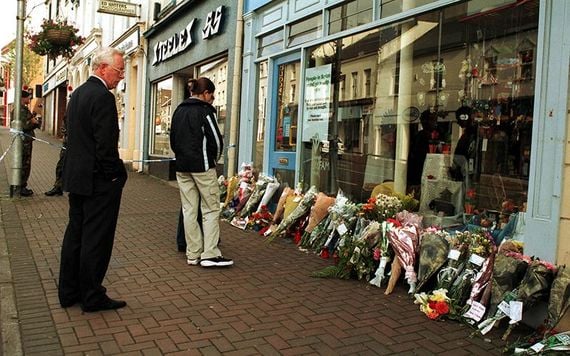 This story pulls you into the heart of the book and reminds you of the enduring importance of the presidency. It's a national barometer, a healing hand, and a marker of who we are and what we stand for.

“That's the soft power of the presidency. The President really doesn't have any legislative power and is mostly told what to do by the government. But that so-called soft power has still been used to brilliant effect, particularly by Mary Robinson and Mary McAleese.

That power culminated in the first state visit of Queen Elizabeth to Ireland and the reciprocal visit of President Michael D. Higgins to London, MacCarthy says. “Thinking of Brexit and relations between Ireland and the UK it draws a stark line now doesn't it?”

Exploring the National Archives to read thousands of letters to the presidents was much more fun than it may sound, MacCarthy continues. “I'd really get a fit of laughing trawling through thousands of letters until I'd strike gold and find out a thing like did you know that there is a handwritten note in the Irish language from President Eamon de Valera on the surface of the moon?”

Excuse me? “Yes, a letter was carried in the shoulder pocket of Buzz Aldrin's spacesuit,” MacCarthy explains. “This was the 1960's and NASA decided to contact 87 world leaders to write a brief message in their own languages to be left on the moon. DeValera is included in that so up it went. I didn't know this about him, but he was gripped and fascinated by the space race.” 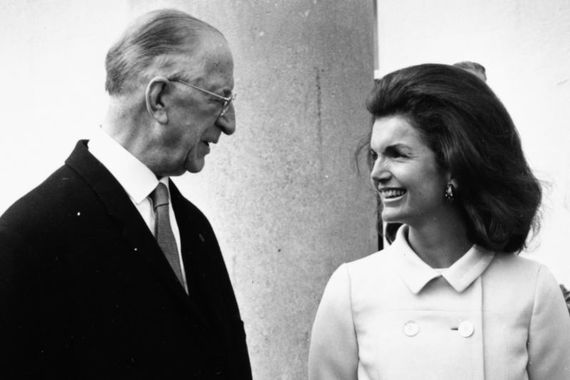 Does MacCarthy have a favorite letter? “Well, one of them is a random one from an Irish mammy in 1970s Dublin. She wrote to then President Cearbhall Ó Dálaigh to say my son Miles is 10 years old and I think he wouldn't make a great king of Ireland's Eye, that tiny little island off the coast of Dublin City. He's a great lad.”

She didn't stop there. “He has leadership qualities for the post, she wrote and the president eventually wrote back a beautiful two-page handwritten letter telling the little fellow that although we don't have any plans for a king of Ireland yet if we did, we will keep you in mind and here's what you'd find if you went to live there.”

“Then he went into the ornithology and the archaeology of the island and he said you'd have to send across to headland for your groceries. I loved those two little letters. Months later, I decided to do a little bit of digging and I found the young Miles. He had grown up to become a ruler of sorts, he's the current Irish Ambassador to Slovenia.”

The President's Letters: An Unexpected History of Ireland, by Flor MacCarthy is published by New Island Books, $29.99.