"The Greatest Beer Run Ever," now on Apple TV+, is based on the true story of Irish American John 'Chick' Donohue's legendary gesture for soldiers in Vietnam. 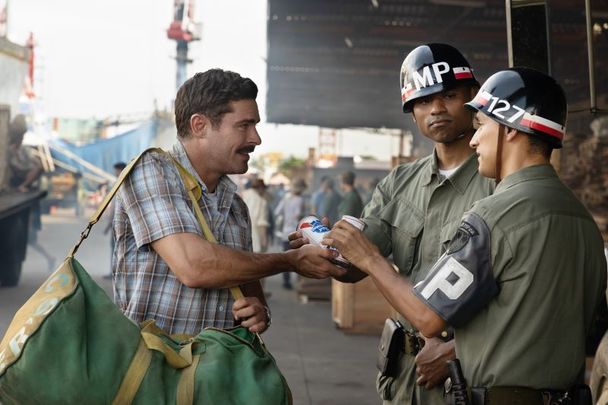 Zac Efron in “The Greatest Beer Run Ever,” which premiered globally on September 30, 2022 on Apple TV+. Apple TV+

Zac Efron stars alongside Bill Murray and Russell Crowe in "The Greatest Beer Run Ever," director Peter Farrelly's new film about John “Chick” Donohue, who once moved mountains to bring beers to his soldier buddies in the Vietnam war.

Heart. It's worth more than gold and John “Chick” Donohue has more of it than most. "The Greatest Beer Run Ever" is the name of the new film based on his impressively insane real-life decision to go to Vietnam at the height of the war in the late 1960s to deliver beers to his enlisted neighborhood buddies.

The holiest of holy innocents, this man who hadn't thought it all through is a hero for our own cynical times, or he should be if the film firmly echoed the book on which it's based.

The real-life story and the movie both begin in 1967, in an Irish bar in the then heavily Irish American neighborhood of Inwood in upper Manhattan. Behind the bar in the film is the World War Two veteran known as The Colonel (played by Bill Murray).

The Colonel says he's sickened by all the demoralizing news reports and the peace protests, shaming our poor boys over in 'Nam.

Someone ought to go over and bring them some beers to show our appreciation, he says. Those are our boys. They deserve better. Everyone at the bar enthusiastically nods and that's where the chest-thumping probably could have ended, as just more spirited barroom banter, except that one of the guys at the bar that night is Chick Donohue, an ex-Marine.

Zac Efron, 34, is the film's first big surprise. The former teen heartthrob who found stardom on The Disney Channel in 2006, he is an odd choice to play a working-class Inwood lad. In fact, he often seems to be as helicoptered into the upper Manhattan neighborhood as he does just about anywhere in Vietnam, but he has the leading man skill to make you mostly buy it.

The truth is Efron's often let down by the film's wooden dialogue and episodic structure. Donohue's decision to take some US beers through one of the bloodiest wars in human history is mad on its face, but the film at times almost makes it look pedestrian. 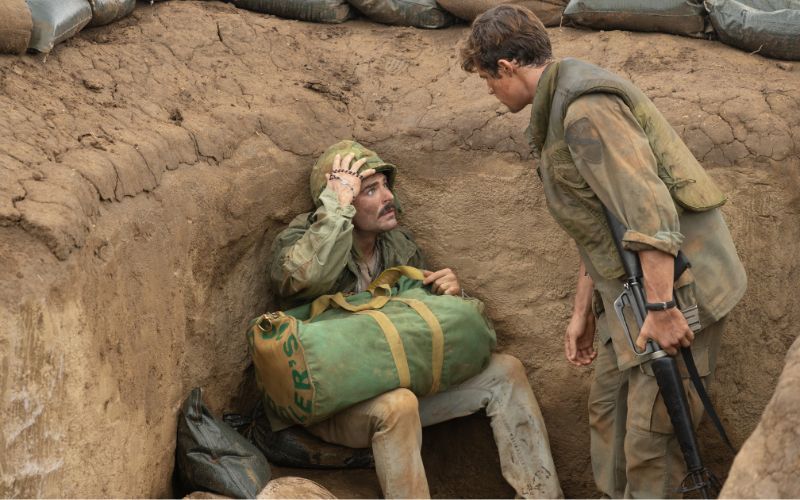 Zac Efron in "The Greatest Beer Run Ever." (Apple TV+)

There's something unarguably weird and mysterious about the decision to take all the things that made you – community, heritage, spirit, and gratitude – to a place where they're been turned upside down, but the film often skips right past that.

Chick is undeniably one of nature's original f—k it guys, who risks it all for a little human connection, but Efron's performance can't seem to decide who he really is, falling somewhere between "Forrest Gump" and "Full Metal Jacket."

If the lead actor's tone varies greatly throughout the film, so do the direction and writing, which stays firmly on the fence about the morality or immorality of the US presence there for most of the run time.

We learn early on that Chick can't get his head around the anti-war protestors, who he sees as letting the country down, but we later see how his experience in Vietnam alters his original reactionary outlook, telling a much harder story about what we were doing there and why. 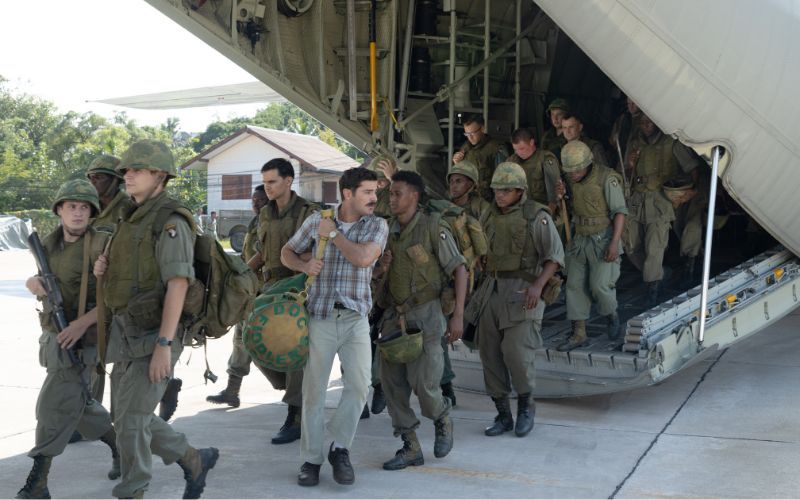 Zac Efron in "The Greatest Beer Run Ever." (Apple TV+)

If the script can't decide if what Chick did was pedestrian or unimaginably epic, neither can the resultant film, but it might have been better to make the decision before the cameras rolled.

The guys he meets in the combat zones in Vietnam all have different reactions to his unexpected arrival. All are bewildered but some are actually furious. One asks, you think a beer is a payment for what we're going through? It's a good question, but Chick hasn't thought far enough ahead to have an answer for it.

“Listen, don't worry about that guy,” a Sargent later tells one of the Irish American soldiers Chick has come to visit after he departs. “I learned long ago that some guys are too dumb to get killed.”

When it's good – and it often is – "The Greatest Beer Run Ever" sees the value of gratitude, which is powerful enough in itself to save lives. But that's the kind of straightforward message that often gets lost in the next standard war movie sequence as Chick literally runs for his life again. 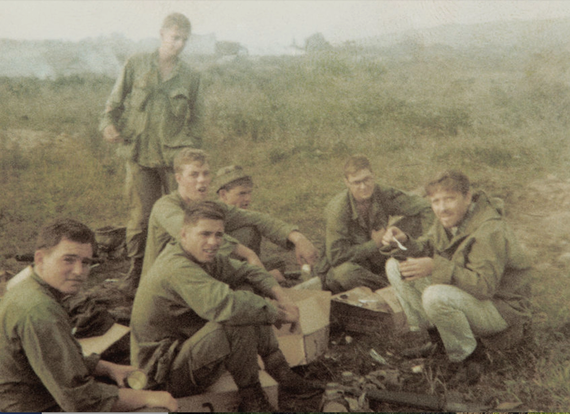 The real life Chick Donohue with his buddies in Vietnam

We figure out early on in the film that Chick has something to prove. At first, he thinks that it's to his idealized neighborhood buddies and the misguided peaceniks protesting them, but as the film goes on, we realize that it's really to himself. He secretly blames himself for inspiring his young friend to go to war, a war in which he soon becomes a victim.

But Chick is not the only one who wonders how things would have gone if he'd made other choices. When one old neighborhood buddy spots him unexpectedly coming down the road in Vietnam, he briefly wonders if they're both dead. How else to explain this mad sight?

“You came here and you didn't have to?” another mystified soldier yells as the bullets ring out all around them. When Chick answers yes, the solider finds new heart to fight on. Maybe there really is hope if this idiot can stay alive this long, the soldier's look tells us. 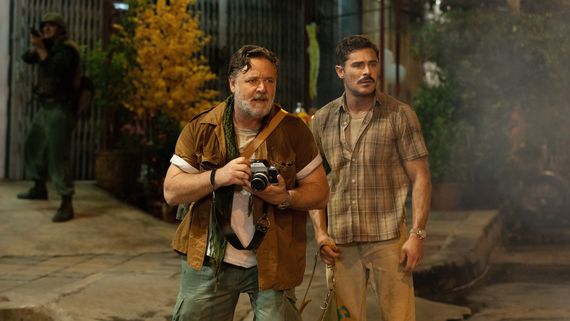 Russell Crowe and Zac Efron in "The Greatest Beer Run Ever." (Apple TV+)

Russell Crowe's appearance as a seasoned war correspondent named Coates is one of the film's major missteps. Chick is forced to confront the shortcomings of his own naive patriotism in Coates's presence, but the sequences are filmed like a standard war movie, starkly at odds with the sheer humor and strangeness of Chick's own private adventure.

Bill Murray as the buzzcut Colonel is a far better gauge of the Inwood community's inner emotional life, but his obvious blind spot is in thinking that Vietnam is the same kind of clearly defined conflict as World War II in Europe.

Things take a much, much darker turn when Chick witnesses a CIA operative commit murder by throwing a captured Vietnamese witness out of a helicopter after forcing a confession from him. Then, when they realize Chick's just a civilian and not a fellow CIA operative, they also conspire to kill him but he narrowly escapes.

There are many wars within this war, the film reminds us. There's the political one, the public relations one, the imperialist one, and many more besides. It's not like World War II, he eventually assures the Colonel. It's chaotic and often criminal.

But if the tension between the kind of utterly crazy gesture made by Chick and the brutality and ruthlessness of the Vietnam War has always been very hard to reconcile, as much for the soldiers as the readers later on, the book the film is based on actually managed it, although the film itself does not.

If you think about it, what Chick did and how he managed to somehow survive and tell the tale are profoundly mysterious, but this film doesn't quite seem to grasp the depth of his legendary gesture, or its beauty.