WATCH: Bill Murray sings “The Star of the County Down" in Co Limerick pub

Bill Murray is making the rounds in Ireland this week, taking in a GAA All-Ireland hurling semi-final in Tipperary, and treating patrons to a sing-song in a Limerick pub. 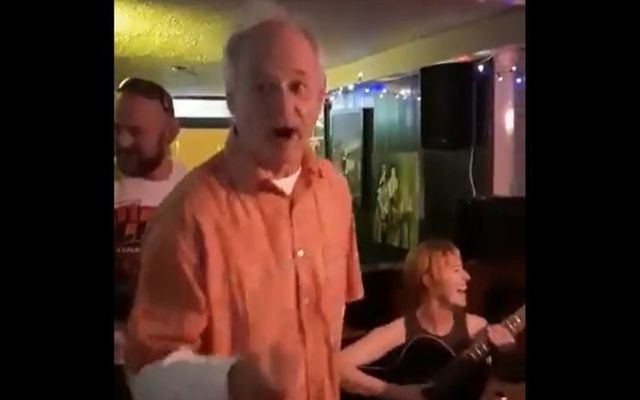 Bill Murray treated patrons to a rousing rendition of "The Star of the County Down" in Charlie Malone's Pub in Limerick City. @DrTFleming, Twitter

Bill Murray, the Ireland-loving "Ghostbuster" legend, headed to the hurling All-Ireland semi-final before joining in on a sing-song in a Limerick City pub.

Bill Murray on a night out in my hometown pic.twitter.com/5XlfGshDPB

The bar's owner Paddy Kelly told the Limerick Leader “We were stunned to see him walk in. People were doing double-takes. There was a group of Spanish people who didn’t believe it was him. When Bill was gone I told them it genuinely was him and then they were crying and very upset that they didn’t get a picture with him."

He divulged that the star really enjoyed his pint of Kilkenny and stayed in the bar for about two hours.

Kelly continued “He was so warm and friendly and was very funny - deadpan humour. He had a great chat with the musician Phil Aherne who was here. Phil is one of the main musicians who plays with Bono and Glen Hansard for the Christmas busking session in Dublin every year.”

Inevitably, a sing-song kicked off and Murray soon was singing along with the locals.

"There were a few guitar players and a sing-song started. He thoroughly enjoyed himself. He gave a wonderful rendition of 'The Star of the County Down'. It was some craic!” Kelly said.

That same day, two Irish women happened upon Murray on a street in Limerick and were shocked to discover that the lad who had "the head off Bill Murray" was none other than the Oscar winner himself.

Was waiting with Anna for a lift on O’Connell st in Limerick last night and said to her “that fella across the road is the head off Bill Murray” and guess who it feckin was lads pic.twitter.com/6FwJKej3rc

McManus was photographed outlining the rules of hurling to the legendary Hollywood star.

Actor Bill Murray is at the hurling in Thurles!

Of course, with a surname like "Murray," we can be sure that the beloved comedic actor has Irish roots. Murray grew up in Wilmette, Illinois, as part of a large Irish Catholic family. His father's father emigrated from County Cork, while his mother's family hails from County Galway.

However, during a 2009 trip to Ireland Murray grumbled that "no one has ever claimed me in Ireland. No one!"