Donald Trump is a relic from the past

The power in nostalgia - an American president who so embodied the past still moving though the present. 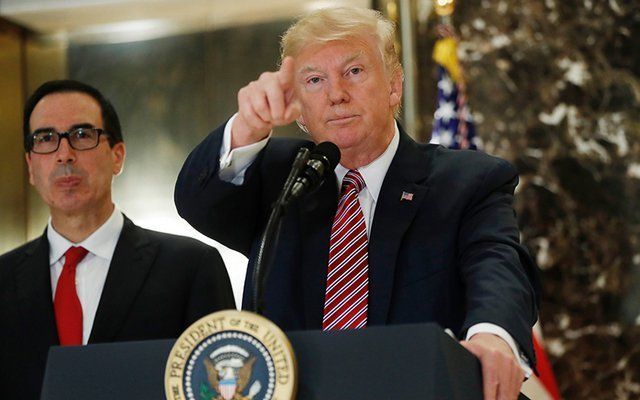 Donald Trump at a press conference at Trump Tower, in August 2017.

Nostalgia is a very potent feeling. The Cambridge dictionary defines it as “a feeling of pleasure and sometimes slight sadness at the same time, as you think about things that happened in the past.”

The films we watch are often filled with it, as are books that become international bestsellers.  Even the TV shows that we enjoy most often openly trade in it.

Things were better then, simpler then, more fulfilling then, less complicated then, we often say. Ah, the good old days. The older you get the more apt you are to be beguiled by the siren song of yesterday.

But the thing about nostalgia is that it's doubled edged. It makes you long for what you feel you have lost – time, youth, opportunity, choices – while reminding you of exactly what you've lost in the present.

It can pointedly tell you that once you were powerful and now you are less so. It can be quietly enraging if not handled properly.

No one has really talked about the power of nostalgia in terms of the election of Donald Trump. They should.

Trump isn't an embodiment of where the world is in 2017.  He's actually 1984, or even further back, still somehow moving through the present.

He doesn't know how to turn on a laptop. He isn't interested in the new technologies. He is only interested in whatever can amplify his own voice or show him an image that reminds him that he matters.

It's why he loves and watches so much TV. TV is a last century technology.

Trump could easily lift his fingers and access the greatest intelligence gathering operations that the world has ever seen, but instead he still gets his daily political briefings on the state of the nation from Fox & Friends, exactly like your elderly grandparents in Florida do.

The people who approve of him the most are also the oldest people in the country. It makes sense.

They see themselves in him. They see echoes of the past embodied in his presence.

The young don't want, in Jay Gatsby's phrase, to be borne back ceaselessly into the past. Instead of hearing a familiar echo of the past, they often rebel at political policies that remind them of how things used to be. That's why Trump's disapproval rating among younger Republicans remains roughly double its level among older ones.

Meanwhile all voters, Republican and Democratic alike, have slowly come to the realization that he reason Trump got elected is also the reason he also often fails.

Trump was a concerted effort by one section of American society to put the gains of other sections on hold. Alarmed by the sight of an African American president, a reinvigorated left and a future in which they were one vote, not the vote, elderly voters pressed the panic button and marched lockstep into nostalgia, into the soothing sepia tinted past, where everyone had a voice but only one was listened to.

Decades from now it will become clear that Trump was just a zombie version of the Ronald Reagan era. Regan too owed his rise to nostalgia. From his Mad Men-era Brylcreemed hairdo to his avuncular middle American voice, he represented ah shucks and gosh darnit in an era of unsettling change.

Trump, however, is nobody's uncle. He lives at the top of a tower of gold where he never has to look at someone he doesn't employ, possibly even including his wife.

In our own era of unsettling change we have exchanged Reagan's folksy charm for an authoritarian hammer. It's the dumbest thing white America has ever done. It broadcasts our losing hand to the entire world.

So Trump is just the latest ill-advised and failing attempt to animate the lost past in the faltering present, as if all the political movements that undermine Trump's authoritarian leadership style will simply fold at the sight of his Brooks Brothers blazer and his red baseball hat.

He marched us all into the past, but he like everyone else is being forced to learn now that you can't live there.