Trump may get us all killed over North Korea -- Learn from JFK, Mr. President

Trump's UN General Assembly speech about North Korea shows he needs to learn a thing or two from JFK. 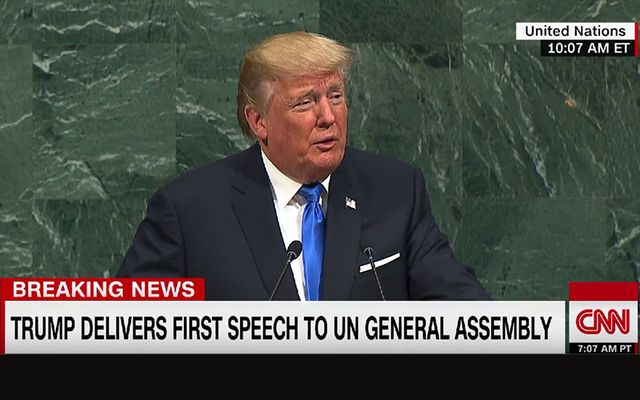 Donald Trump may well be leading us into a nuclear war with a deranged dictator fully capable of destroying South Korea and Japan and maybe Guam with nuclear missiles.

Trump was off his leash again at the UN in a speech written by Steven “American Carnage” Miller, who wrote the worst inauguration speech in history.

Addressing the North Korean threat at the UN, Trump stated  “The United States has great strength and patience, but if it is forced to defend itself or its allies, we will have no choice but to totally destroy North Korea. Rocket Man is on a suicide mission for himself and for his regime.”

The New York Times stated: "Without mentioning it by name, Mr. Trump also chastised China for continuing to deal with its rogue neighbor. 'It is an outrage that some nations would not only trade with such a regime, but would arm, supply and financially support a country that imperils the world with nuclear conflict,' the president said."

That’s what you call bulldozer diplomacy, castigating the one country that could restrain the madman in North Korea at a moment when the US needs them more than ever.

For good measure Trump dissed Iran over a nuclear deal that is considered a model, painstakingly put together by the Obama administration and repeated his threat to invade Venezuela. That’s what is called the “ Hasta La Vista baby” school of diplomacy .

Read More: Trump and JFK very similar in many ways

Also, because we have an utterly depleted State Department there apparently is no envoy to send to the region, to shuttle between China, Japan and South Korea and seek to work out a solution.

Trump considers diplomacy almost the coward’s way out much preferring his bully pulpit.

But Teddy Roosevelt defined successful diplomacy with his immortal phrase “Talk softly but carry a big stick.” Trump is screaming and  has a limp  noodle not a stick.

Trump should do himself a favor and read about the Cuban missile crisis when JFK outmaneuvered the Russians and saved the world from Armageddon in October 1962.

Trump, in the same job as Kennedy, makes one wonder about the truth of Darwinism where the species continues to improve itself.

Not so in this White house.

Tone it down Mr. President before you get millions killed.

Read More: JFK's last speech he never got to deliver warned about a president Trump

Related: Republicans, The Kennedys, US Politics