Trump and JFK are very similar in many ways

What do President Kennedy and President-elect Trump have in common? Quite a lot, one historian claims. 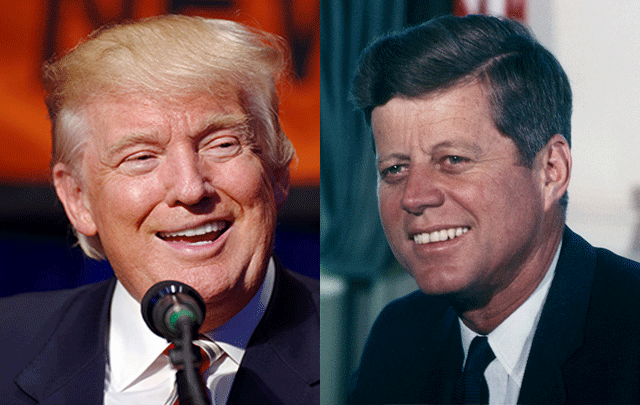 What do Donald Trump and JFK have in common? Quite a lot, one historian has claimed.

Historian Jonathan Lewis says Presidents John F. Kennedy and Donald Trump have some “pretty noticeable similarities.” On the surface, the youngest ever US President in history and the oldest are chalk and cheese, but he maintains there are some interesting parallels between them.

Talking to Fox News, Lewis said the way the two Presidents both used the modern media to communicate: JFK used the still new medium of television to “speak directly to the American people” where Trump uses, “social media, and specifically Twitter to speak to the American people in a way never before done. They’re both disruptors and I think that’s critically important. JFK viewed his predecessor Eisenhower as being slow moving and behind the times in foreign policy. Trump’s the same, he views Obama as slow moving and behind the times!”

He also said that the two were viewed with suspicion by people in both their respective parties and that, “neither one is an ideologue… that’s a reason for optimism because being flexible is critical.”

Lewis also said that both seemed to be interventionist in economic matters – Trump because of his habit of tweeting about American companies and Kennedy for denouncing the steel industry during his presidency for raising prices.

He also says that JFK “stumbled” in foreign policy and wonders if Trump might do the same. Both nominated Secretaries of State with impressive private sector resumes but no actual experience in diplomacy.

Lewis is not the only commentator to draw a parallel between Trump and Kennedy. Recently Bill Gates said Trump’s novel communication style could energize Americans behind his leadership.

"A lot of his [Trump] message has been about ... where he sees things not as good as he'd like.

"But in the same way, President Kennedy talked about the space mission and got the country behind that."

The Microsoft founder spoke recently with the president-elect and said he hoped Trump’s presidency would push innovation, “The key point I was pushing there was the opportunity for innovation in not only energy but also medicine and education and encouraging the idea that that’s a great deal and a great thing for American leadership.”