When is a United States veteran not a veteran? When they’re an LGBT one. Thanks for putting us straight. 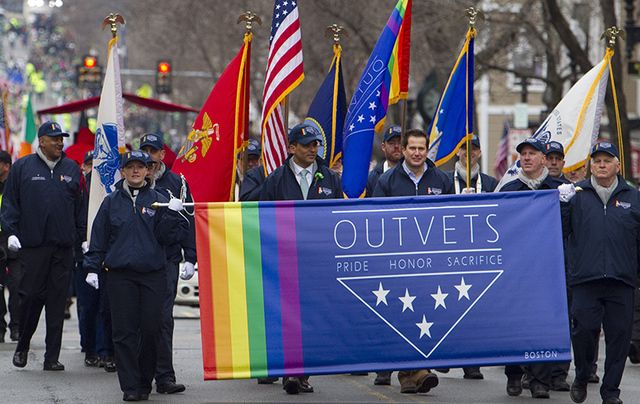 When is a United States veteran not a veteran? When they’re an LGBT one.

Thank the South Boston Allied War Veterans Council for putting us all straight this week.

You can spill your blood for America overseas but your service will not be honored if your orientation doesn't match the nine men (and can anyone doubt that it is all men?) of this holier than thou council.

On Tuesday the council voted nine to four to ignore the human worth and service of the LGBT veterans of OutVets, dramatically renewing the group’s long exclusion from the city’s St. Patrick’s Day Parade.

There is no excuse for what this council has done. There is no pardon for the needless insult they have delivered to their fellow service members. It is as mean spirited as it is despicable.

The sheer scale of the council’s contempt for OutVets was made clear by the fact that at first they did not even condescend to give the group a clear reason for their sudden exclusion.

We have all been done this path too many times by now in the Irish American community not to know what’s really at play here or how it will end.

Bryan Bishop of OutVets told the press on Wednesday that the council eventually told him they objected to the group’s logo, a small rainbow patch, claiming it violates the parades “code of conduct” because they believe it represents gay sexuality.

A rainbow apparently means gay sex to this council. Tell that to Dorothy, Toto and the Wizard of Oz.

“I told them if that’s the case, then every picture of a rainbow that leads to a pot of gold in the parade needs to be removed,” Bishop said, taking the shriveled fig leaf off the council’s bigotry.

Boston St. Patrick’s Day Parade banned its only LGBT group because they have a small rainbow patch on their jackets https://t.co/drmPI8Qddy

Reports suggest the council is now seeking a quick path out of their own obsequiousness – a climb down in the face of the growing fury they have unleashed in their own city.

In a false attempt to look reasonable they have offered to welcome OutVets back into the parade with one catch, they must remove the rainbow image, but Bishop has refused.

“They are stuck in an arcane time in our history,” he told The New York Times.

He’s right about that. The nine voters from the South Boston Allied War Veterans Council may see themselves as standard bearers for traditional morality or faith, but their malice and mean spiritedness toward their fellow veterans can be seen from space.

This is ridiculous and un-American. All of us at @IAVA stand with our brothers and sisters at @OutVets. #equality https://t.co/6irENAITmQ

We all know the truth by now. OutVets’ sudden dismissal is not about rainbow flags anymore than the civil rights movement was about lunch counters or bus seats.

The truth is those nine voters simply don’t want OutVet’s to participate. They do not value their service, nor do they see it as equivalent to their own. They cannot even see the shared humanity of the people they are discourteously insulting.

Executive Dir of Mass Fallen Heroes has resigned as Chief Marshal for St. Patrick's Day Parade bc of decision not to allow Outvets to march

The reversal is especially egregious now after OutVets has marched with pride and without incident for the past two years in the Boston parade. And even if they come to their senses and reverse their lamentable decision today the damage they have already done is inexcusable.

Massachusetts Governor Charlie Baker put it simply: “That word, “veteran” to me, it approaches holy. The idea that we would restrict the opportunity for men and women who put on that uniform, knowing full well they could put themselves in harm’s way, and deny them an opportunity to march in a parade that’s about celebrating veterans doesn’t make any sense to me.”

Unless that veteran is LGBT.

Then the South Boston Allied War Veterans Council thinks that they’re not even worthy to walk the same streets.