Undocumented Irish and those who counsel them speak to the particular trauma of “Ulysses syndrome.” 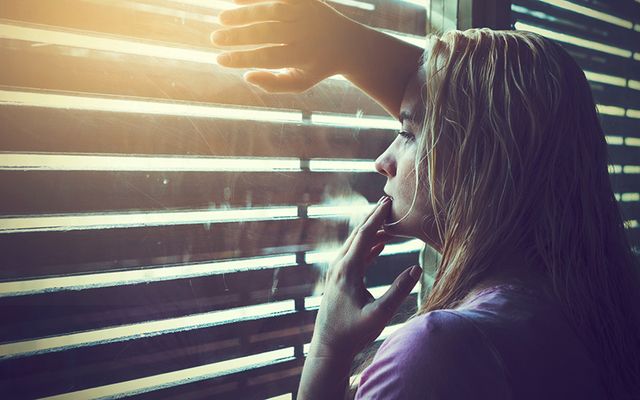 The mental health community has developed a specific term for the stress and isolation of being an undocumented immigrant. iStock

The Irish come here for the American Dream, to make some money and get ahead, but they’re finding the pathway increasingly perilous.

“The gulf between what they experience and what people back home think their lives are like here can be huge and unsettling,” says Beth Flaherty, Center Manager for Pieta House New York, whose clients include several undocumented Irish immigrants. The center seeks to help those in suicide distress.

No one can deny that the political climate has become more hostile in the last six months. Increased talk of bans and border walls and immigration sweeps have left many living in fear of the ever-present fear of deportation. Profound feelings of failure, isolation, vulnerability, and loneliness accompany it.

That threatening atmosphere, coupled with the stress of living in the shadows, has led psychologists to identify a condition they call Ulysses Syndrome, a term that describes the uniquely high levels of stress that the undocumented experience. It is named after the legendary Greek king who wandered at sea for ten long years after the Trojan War.

“The documented are able to go home at some stage, but the undocumented can’t and they feel it keenly,” says Flaherty. “They can come to feel suspended between two worlds, and like they don’t really belong in either place.”

Read More: Cry from the heart of Irish undocumented in plea to stop deportations (VIDEO)

However, some argue that that sense of not belonging can sometimes apply to first-generation Americans, too, no matter what their legal status. “One of the biggest challenges that people who were not born here face is a sense of confusion about where to call home,” says Laura O’Brien, a psychotherapist who has worked with the Emerald Isle Immigration Center in Queens for a decade, bringing her into weekly contact with the Irish community.

“There’s this feeling they have of being a little bit lost, or of being first generation Irish and of not really having firm roots here. There’s the melancholy of feeling between two worlds that affects both undocumented arrivals and people who were born here of Irish parents.”

Consciously or unconsciously trying to tackle Ulysses Syndrome is the reason many who have the opportunity to go back to Ireland do so, says O’Brien. “I work with many people who have lived here most of their life but still consider Ireland home. They say things like one day I plan to return home. In their hearts and in their minds Ireland is still home, despite being here for decades.”

Flaherty agrees. “People are grateful for the Irish communities here but it’s not totally like home. Those conversations keep coming up here.”

And what do the undocumented themselves make of this? They feel perpetually stuck. For many, the cost of lawyers’ fees, visa processing fees, and other services can be prohibitive. Others cite their fear of immediate deportation if they dare to come out of the shadows.

Speaking under condition of anonymity, one woman told her story to IrishCentral, a story she says affects more lives than one.

Toward the end of the 1980s, Mary arrived here on an Aer Lingus flight from Dublin. She was young with it all ahead of her, she says. She was looking for a fresh start in the new world.

Somewhere on the cab ride between the airport and the city, she recalls seeing the epic profile of New York City for the first time and falling hard for it. When the skyline came into view she felt like cheering, she recalls.

That was then. Now she’s a middle-aged home attendant in her third decade here. Undocumented for all of this time, her fear of what could happen has grown to the point where it’s almost debilitating.

Since Donald Trump’s election, she admits she has been staying home more, not taking the subway as much, growing increasingly anxious about the news reports of ICE sweeps in her borough.

Living alone with a cat for company, she has already accepted that she probably won’t be getting married or applying to change her status in that way.

Instead, her plan is to return to Ireland when she reaches retirement age. Unmarried, without children and with no family to return to, her isolation is almost complete.

Anxiety about her status means she has made few friends here, because that means letting them into her personal life, risking exposure. At work, she’s paid in cash, without a paper trail, in a look-the-other-way work culture that has been her only source of income.

What you might not expect, given her experience, is that Mary still loves New York. Each summer she attends all the free summer concerts. She goes to Shakespeare in the Park, she visits all the public swimming pools, she attends the symphony concerts, and all the free movies too.

But she goes by herself. The roads have all run out around her. Her only trusted companion now is her cat. She’s completely unknown to the wider Irish community. She has literally fallen off the map. She might as well have fallen off the planet, she says.

It’s a fearful existence and she knows it. Which is why she has been seeing a counselor once a week. But with the toxic political rhetoric surrounding any attempt at immigration reform, she knows this is how it will remain.

Across town lives a woman we’ll call Aisling. She moved here with her Irish husband 15 years ago and, while he managed to acquire legal status, she overstayed, meaning she was subjected to the ten-year ban.

They pair ended up moving back to Ireland together until the Celtic Tiger came crashing down in 2008 and their economic circumstances changed.

Aisling’s husband couldn’t find suitable work in Ireland so he moved back to the USA and a long distance marriage commenced. Her husband would return to visit her in Ireland at least four times a year, sending money home to support her and their three children, saving every dime he made.

After a lengthy and anxious wrangle with the DHS they were eventually reunited in America after the decade-long ban finally ended, but then the marriage failed.

They had grown apart during their long separation, they discovered. The problem wasn’t infidelity, it wasn’t financial, they just wanted different lives. All five family members suffer terribly now because they are no longer a family. Had they been able to stay together they might never have fallen out of love, they suspect. Love thrives when it has a context, after all, take away the context and it can go too.

Meanwhile, the isolation and stress of living under the constant threat of removal can lead to the use of drugs and alcohol as a temporary panacea, which in turn can lead to health problems in other areas of the undocumented lives, psychologists say. It’s a vicious cycle familiar to anyone working with immigrant communities.

“The services we offer acknowledge people can struggle and it’s perfectly OK to ask for help,” says Flaherty. “We are solution-based so if you’re having a hard time finding a way to cope here those are the issues that we work through with people.”

Pieta House can be reached at pietahouse.org

The Emerald Isle Immigration Center can be reached at eiic.org