One man featured in this video of undocumented Irish hasn’t stepped foot on Irish soil for more than 30 years. 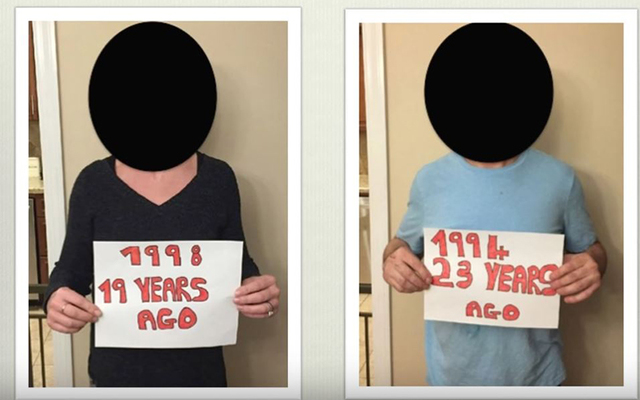 Undocumented Irish immigrants in New York have made a video in an effort to highlight their precarious existence. Screen capture / YouTube

Undocumented Irish immigrants in New York have made a video in an effort to highlight their precarious existence.

Edited by the Aisling Irish Center in Yonkers, NY the video features a number of undocumented New Yorkers from Ireland. Their faces are blacked out but in their hands they hold up a piece of paper with the year they arrived in America and below it the number of years since they were last home.

“Those of us who have overstayed are not criminals; we work hard, we pay our taxes, and we make a very positive contribution to the economy of this country,” the video declares.

“Thousands of Irish emigrants dream of one day being able to go home to Ireland and once again hug their loved ones, but for many, it is too late.

“The punishment, however, is the possibility of never setting foot in our birthplace again or seeing our loved ones, or not being able to say goodbye before they die.

“We have all lived here in the hope that immigration reform would one day become a reality.

“Having outstayed their time here, the realization that there was no path to legal status soon dawned on them, but life in America was providing them with so many opportunities, it was impossible to walk away from the dream,” the video concludes.

Speaking to IrishCentral, the center’s executive director Órla Kelleher said she decided to make the video, “in the lead up to St. Patrick’s Day; a time when we celebrate Irish culture and heritage, but also a time to celebrate Irish diaspora worldwide including 50,000 undocumented Irish emigrants living in the United States. I have friends who are in this situation and they work very hard, pay their taxes, obey the laws, and contribute in a very positive way to making this country the great place it is – they are not criminals.”

She added, “Many of them were the first to come forward and volunteer when New York was devastated by the 9/11 terrorist attacks and again, when widespread damage was caused by Super Storm Sandy. Their legal status was never questioned when they stepped up to help New Yorkers rebuild their homes and their lives following these terrible attacks.”

Read More: In Queens, the threat of immigration raids grows

And she gave short shrift to those who think the undocumented should go home.

“America is a country which was discovered by immigrants and built by immigrants… Most Irish emigrants fell in love with this country, and stayed because of better opportunities and a much better lifestyle. Having overstayed their time here, the realization that there was no path to legal status soon dawned on them, but life in America was providing them with so many opportunities, it was impossible to walk away from the “dream”.”

The Aisling Center showed the video to Minister for the Diaspora Joe McHugh at a viewing also attended by members of the Irish Lobby for Immigration Reform. A spokesperson for the lobby told IrishCentral the video had been, “a very impactful way to impressing on the Minister the importance and urgency of the situation and Minister McHugh seemed to 'get' the magnitude of the issue and seemed to grasp the part he could play in rectifying it.

“[McHugh] spoke about [how] the Irish Constitution specifically says that the Irish government is still responsible for its Irish citizens, no matter where they live, and that it is the duty of the Minister for the Diaspora to work on their behalf.

“The ILIR hopes that Minister McHugh does remember those he met in the Aisling Center and the stories he heard and that he is finally the Irish minister who actually does something on behalf of this community.”