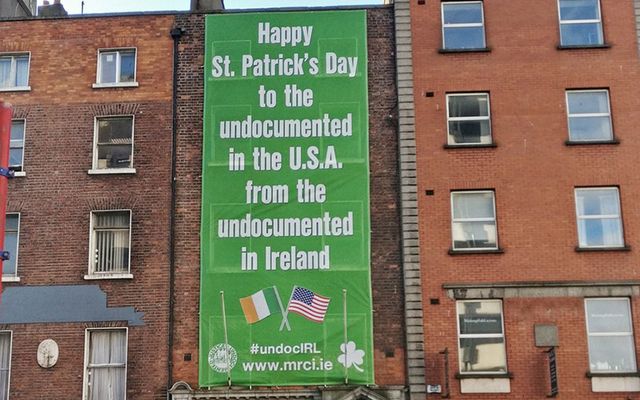 A group representing undocumented immigrants in Ireland has unfurled a banner on Dame Street in Dublin city center with a message of support for the undocumented in the United States.

Organized by the Migrant Rights Center Ireland (MRCI), the group hopes the banner and protest will draw attention to the plight of the estimated 26,000 people living illegally in the Irish Republic.

A beautiful evening spent with #undocIRL and their supporters pic.twitter.com/8yk0gQmyQO

In its open letter to the undocumented in the US the group admitted, “Being undocumented – staying undocumented – is not an easy life to live… We know why you do it. The lives you live in America, we live in Ireland. We know the journey of hope all migrants go on, uprooting yourself, stepping into the unknown, working for a better future for you and your family… right now we extend a hand of friendship and a shoulder of strength to you – our fellow people, undocumented and documented, in the Irish community and in all communities in the USA this St. Patrick’s Day.

Beir bua agus beannacht (may victory and blessings be yours)”.

In a statement to the press Rebecca, on of the authors of the letter and an undocumented migrant herself from South Asia, said, “I have lived and worked in Ireland for 15 years now. I have Irish grandchildren. Ireland is my home. I know exactly how the undocumented in America feel: missing funerals and celebrations back home, living in fear, afraid that one day you will have to leave forever… it is not easy. We wanted to send them our support, especially now their President speaks with such anger and hatred.”

Aoife Murphy, a spokesperson for  MRCI, said that although there were plenty of individual Irish politicians who were supportive of undocumented immigrants in Ireland, “The Department of Justice maintains there are no plans to introduce a general regularisation... we will keep campaigning until undocumented adults and children in Ireland have a pathway to papers at last.”

According to the group’s own figures over a third of undocumented people in Ireland are of Filipino nationality, nearly a fifth each are Chinese or Mauritian and the remainder are from numerous other countries.

61% are aged between 25 and 39 and 43% are raising a family in Ireland. Close to nine in ten are employed and over half have a college education. Just under a third work in the food or accommodation sectors whilst 29% work in the care industry and a further 13% work as cleaners.