Over 20,000 undocumented migrants in Ireland seek reform similar to that campaigned for by undocumented Irish in the US. 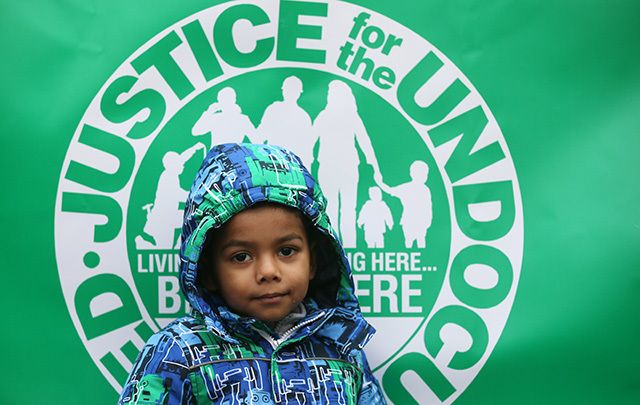 Pictured are friends, and supporters of undocumented adults and children on St. Patrick's Day 2015. RollingNews.ie

Some 50,000 undocumented Irish in the US may be fearing what awaits them when Donald Trump takes office on Jan 20, but back in Ireland thousands of people from other around the world in a similar situation are campaigning for the right to remain in Ireland.

According to the Migrant Right Centre Ireland (MCRI), there are currently between 20,000 and 26,000 undocumented migrants, including children and families, living and working in Ireland, the majority of whom have been residents of the country for many years.

“We don’t want to take anything from anyone. We just want to give and to feel we belong here by contributing,” Ana Maria Alves Caiado and Olivia Rocha dos Santos, two undocumented Brazilian migrants living in Galway, recently told the Irish Times, stating that the best present they could receive for Christmas would be to pay taxes.

Many of the undocumented currently in Ireland moved here in better times, more than a decade ago, before the economic crash, when employers were easily able to acquire work permits for migrant workers.

When the plant was closed in 2010, however, two years after the Celtic Tiger bubble burst, there was no obligation on the employer to provide a return airfare to Brazil and so those who had married, started families, and built a life for themselves in the west of Ireland were reluctant to leave it all behind.

Risking deportation if their immigration applications are not successful, some of these workers who remained find themselves with no workers' rights, unable to speak up for fair pay or unfair treatment in their place of work, and without access to State benefits or medical care. They're dependent on insecure, cash-only jobs they cannot rely on.

According to the Gort Justice for the Undocumented group, incredible parallels can be drawn between these workers and migrant workers in the US.

Those in Gort argue that this immigrant community is highly valued and that the Irish government has failed them. Dr. Margaret Brehony, who conducted a survey for the Gort Justice for the Undocumented group, recently told the Irish Times, “These people are worse off than if they were asylum-seekers in direct provision.”

“Direct provision is very challenging, but undocumented migrants outside that system have neither shelter nor the right to shelter or food.”

MCRI oversees some 1,500 undocumented migrants and allies under the group Justice for the Undocumented (JFU) which is currently campaigning for the introduction of a regularization scheme that would open up opportunities for people to acquire citizenship, a proposal similar that which has been supported by the Irish government for the Irish undocumented in America.

“A straightforward, transparent scheme would give people the opportunity to come forward and apply to regularize their immigration status,” said Edel McGinley, MRCI Director, in November when the group addressed the Irish government.

“The Irish government has supported similar proposals in the US over the years; continued inaction on the same issue here at home makes a mockery of their representations in the US.

“A regularization scheme would generate twelve times more in immigration fees alone than it would cost to implement. This is a fair and pragmatic response to an urgent issue.”

Pictured a banner in front of Dame Street on the offices of the Irish Refugee Council to the Undocumented in both Ireland and the USA. Image: RollingNews.ie

“We are the very same as the Irish undocumented in the United States, and we’re just asking for the same thing," Priya, a JFU spokesperson, stated earlier this year.

“We work hard. We contribute every day. We’re part of this country.”