Anton Moore, the Derry-born General Manager of the Gansevoort Meatpacking NYC, has a glittering resume, but he wears it in a light, and typically Irish, way. 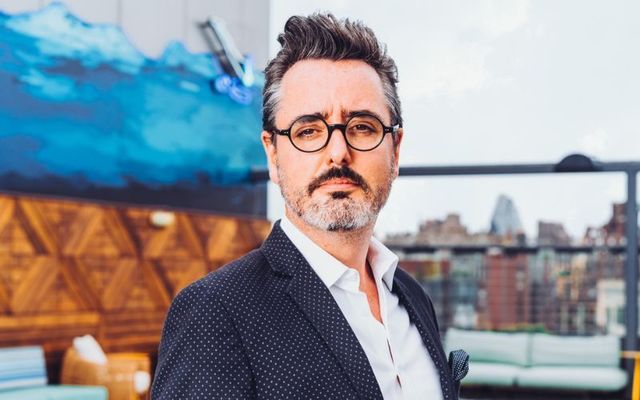 Irish people can be found running the world's top hotels from Shannon to Seoul and it shouldn't be a big surprise, our skills when it comes to hospitality are legendary.

One example of a top-flight Irish General Manager running one of the world's great five stars is Derry-born, but Mayo- and Florida-raised Anton Moore, who presides over the recently renovated Gansevoort Meatpacking NYC hotel in the heart of the tony Manhattan district.

Located in a place where high-end shopping, celebrity sightings, and Michelin-starred restaurants are ubiquitous, the hotel has captured lightning in a bottle: a trendy neighborhood, an eye-catching modern design, attractive price points, and supreme ease of access (getting here by car or subway is a cinch).

The Gansevoort's mix of luxury, fine dining, hearty breakfasts, great service, and ideal location make it impossible to beat and Moore, who has an impressive background in luxury hotel management, clearly knows it.

“I was born in Derry and when I was seven we immigrated to Florida,” he tells the Irish Voice, sister publication to IrishCentral, "but I used to love going back to Ireland and after high school, I spoke to my aunt who ran the very famous hotel in Ballina called The Downhill Hotel. She  introduced me to Ashford Castle.”

Taking Oscar Wilde's advice of starting at the top and sitting on it, Moore gained valuable experience at the most celebrated (and beautiful) hotel in Ireland. His career progress was swift. After training at Ashford he moved to Dublin and the Conrad Hotel. Then he moved to London to work at the Conrad there.

“I moved to America the week before 9/11 where I started at the Waldorf Astoria, where I worked for ten years starting in sales and ending in entertainment sales,” he explains. “I set up film and press junkets where film stars would speak to hand-picked journalists about their latest films.”

(Full disclosure: although we did not meet at the time, I was one of the entertainment journalists attending these new film launch events which I miss for their efficiency and access to the talent. They are still talked of with admiration by the entertainment writers who attended them).

“Those were great days and during them, I was recruited by Ian Schrager (a founder of Studio 54, Morgans Hotel Group, Gramercy Park Hotel, and many more) and the Marriott group and I opened five of their luxury Edition Hotels, including the one in London, the one in Istanbul and Miami.”

It's a glittering resume but Moore wears it lightly in the Irish way. At all times impeccably, elegantly dressed, his look is still somehow understated, conveying an absolute absence of notions.

So how would he describe the newly revoted Gansevoort? “I think we are a better version of what we once were. And that's from a style and design standpoint. This hotel was the center of nightlife for many years, everything that used to go on down here centered around this hotel. And now here we are in the same neighborhood, but all grown up, and the neighborhood itself has grown up.

"Everybody has an opinion of this hotel because people that are in the know in the luxury lifestyle world will remember this hotel. And so I think that's the important thing to let them know is that that we've grown up, and that we are a modern version of ourselves, of what we were when we first opened 17 years ago.”

The hotel has a boardroom that seats up to 20 people (in use the day I visited). They also host frequent events on the rooftop (with a capacity of 200). “It's all indoor/outdoor, we have the outside and the city skyline, we also have this spot on the ground floor for coffee or cocktails.”

The Saishin Sushi Restaurant located on the Gansevoort rooftop is a softly lit indoor and outdoor dining experience with seating for up to 50 that combines a finely crafted sushi omakase menu with dazzling views of Manhattan and The High Line. It's a hidden gem that word of mouth is turning into a must-visit.

If love makes the world go around, that law also applies to hospitality, Moore suggests. “I love the business. It's in Irish people's DNA. We just know how to entertain, hospitality is in so many Irish people's blood.”

Are you aware of how many Irish people manage top-flight, five-star hotels around the world?, I ask him. “I am, in fact I know many of them and I know how they achieved it. We had the training. Obviously, tourism is huge in Ireland and I remember my grandmother and my mother saying the Yanks were coming.”

“The Yanks all over Ireland during the summertime and the local pubs and hotels offered a huge Irish welcome. So I think quite naturally going into the hospitality industry is an easy fit for us. Ashford Castle and Dromoland Castle and places like that are the best of the best, in terms of experience and learning.”

Is managing a hotel a bit like being in the circus? “It is exactly like being in a circus. There is no one week is ever alike and no given day either. We've been very fortunate that we're so busy and frequently sold out, that's how crazy it is in August. I can't complain.

“It frustrated me when I hears hoteliers and restaurant owners complaining because they thought the industry was over a couple of years ago. It's actually fantastic. It's come back and please God, it's going to continue.”

“The next version of New York is always better than the last version and so we're in this transformative time right now. And, you know, we just continue to reinvent ourselves.”

Looking for the perfect first-time stay in Manhattan? On your first or follow-up visit, you'll see what Irish talent and experience can do to elevate a good hotel into a great one.