Call it the MAGA insurrection of January 6, 2021. It was the most shameful act in modern American history. 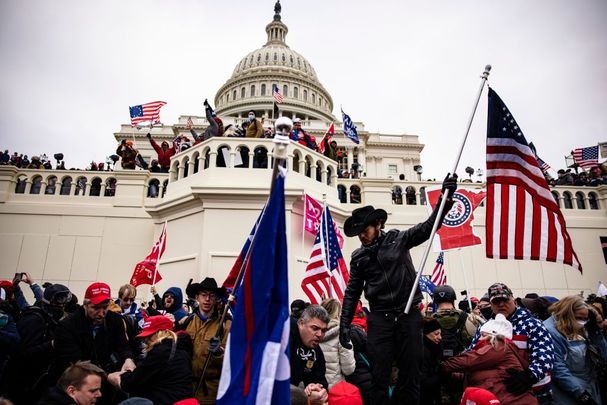 This intolerable and carefully planned attack struck at the very foundation of our democracy and it will live in infamy for years to come.

It was also entirely predictable. Who could have seen this coming, you ask? Well, anyone with a pulse ought to have. Since the election, which he lost a landslide, Donald J. Trump has encouraged his online insurrectionists to come to Washington D.C.

For four years they have been repeatedly warning you that Trump's thuggery has emboldened a lethal cabal of white supremacists and Neo-nazis.  They have warned you that Trump would burn this country and all that it stands for to the ground if he found it expedient - so how do you like them apples now?

It wasn’t today’s events that distinguished bad people from good people. That moment has long passed.

Speaking to press shortly after the Capitol building siege a police spokesperson said that the remarkably low number of officers on duty on the day and the kid-glove policing style they employed with the insurrectionists was the result of a decision not to escalate the potential conflict.

But for over two months Trump has been telling his supporters the election was stolen from him, so surely the police must have anticipated some aggression? For much of the afternoon, the only question some observers had was if they had actually decided to fail.

Questions remain: Who let these insurrectionists into the Capitol building? Why did it take half the afternoon to drive them out? What kind of national security breach does it represent that they were able to access senior governmental figures' private email and desktops?

Certainly, the kid gloves approach of the Capitol Police contrasted starkly with the stormtrooper military presence on the Capitol steps this summer in response to a Black Lives Matter protest.

So the impression of a two-tired national justice system was further cemented with the cameras rolling as Capitol Police helpfully cleared a path for the insurrectionists to invade the Capitol building.

TikTok video on the scene appears to show Capitol police allowing the rioters in. pic.twitter.com/VRdR6Cs3uH

After the invasion, Trump of course offered no criticism of his supporters violent thuggery, but instead simply declared: "We love you. You're very special."

He fed them more lies and he told them he loved them.

His daughter Ivanka took to Twitter to call the insurrectionists “American Patriots.” But she deleted the Tweet later after receiving some political and presumably legal advice.

If they get away with this it will be worse next time. I promise you.

But as the sunset on one of the worst days in modern American history on Wednesday evening a woman lay dead, the U.S. Capitol remained under siege and some Senators and Congress-members debated whether to impeach Trump or pursue the 25th Amendment for a man that many in his inner circle now believe is out of his mind.

The 25th amendment would require Mike Pence to announceTrump no longer fit for his office and requires half his cabinet and two-thirds of Congress to agree. It's an idea that seemed far-fetched but the riot changed everything.

Meanwhile, on Twitter, President-Elect Joe Biden commented that “America is better than this” even as the national faith in American exceptionalism and democracy was being eroded in real-time.

Is America better than this, though? Ask your LGBT friends, your Black friends, your Mexican friends, your Muslim friends, and your Native American friends and you may get a more qualified answer. They may not quite share the President-Elect's elevated ideas about this nation or its daily conduct.

Perhaps it's better to wait a few days after an attempted insurrection to even wonder about it. Perhaps today, when the contrast between how fascists are policed and how Black Lives Matter protestors are, is not the day to make that claim.

Reflect also on the gallery of enablers who have helped bring us to this dreadful day. New York's Cardinal Dolan made a high profile appearance at the Republican National Convention, all but donning a red hat himself.

Fox News, in daily echoing Trump's false claim that the election was stolen, also helped to radicalized a generation of voters and now we are reaping that whirlwind.

Even the Senators and Congress-members who, although knowing better, signed up to protest an election they knew was won fairly and squarely, and frankly wasn't even close, have this coup attempt to answer for now.

Trump's political rise was due to backlash against a black president. His insurrection was in response to the false grievances that he fostered and the failed but racist effort by the GOP to disenfranchise Black voters by nullifying their votes in swing states.

In the face of Trump’s response to this ongoing insurrection, I am convinced @VP can make a strong case that “the President is unable to discharge the powers and duties of his office.” He should gather the necessary support from the Cabinet to remove the President immediately.

Trump's political style is always is always to escalate. If we do not press back he will press harder. Can there be anyone left who doesn't understand where this is heading if he's unopposed?

It's time for the 25th Amendment. Now.