If Brexit is going so well, why the mad rush to avail of Irish passports? We will soon have a glut of new countrymen. 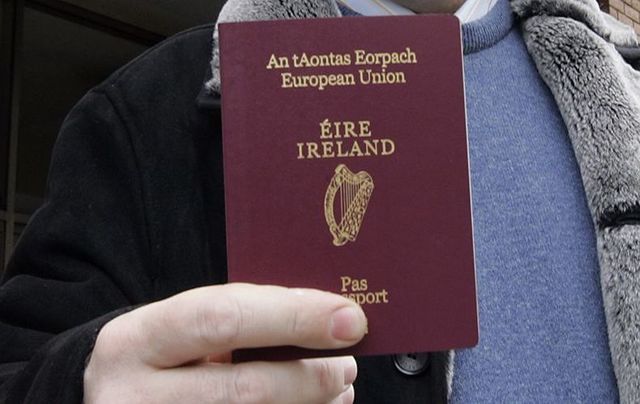 Irish passport: "we will soon have a glut of new countrymen and countrywomen joining us under the Tricolor." RollingNews

If Brexit is going so well, why the mad rush from people in Northern Ireland and the U.K. to avail of Irish passports? Isn’t it time to call this deluge what it obviously is, a cynical insurance policy taken out against looming chaos?

The latest figures from the Irish Department of Foreign Affairs spell it out. There has been a dramatic surge in first-time passport applications at the Irish Embassy in London since the Brexit referendum in June 2016.

The number more than tripled from 4,086 in the first half of 2016 to 14,177 in the second half of the year. That's quite an administration spike for the put upon workers at the passport office, who must feel bemused to be supplying so many Hail Mary passes at such a record rate.

Passport applications rose again in the first half of this year to 15,421.  So the anxiety is actually only trending upward, with the figures in line with an overall increase in the volume of all applications.

For many, an Irish passport is the best get out of jail free card, a way for worried U.K. citizens to escape the new fortress they voted to become.

Now that the implications of the vote to leave the European Union are slowly beginning to dawn on people, no wonder they are looking less and less excited to find themselves citizens of a suddenly insular and inward looking nation.

In a farcical Father Ted-style development, more and more people are availing of the “foreign birth registrations” process, through which a person with a grandparent born in any part of Ireland can apply for a passport and Irish citizenship.

It's the so-called “Irish granny rule” and since Brexit it has exploded in the U.K.  People must be hugging themselves with glee to discover their grandparents took the boat once.

But the largest increase in Irish passport applications received in London is in the category of applicants who automatically become Irish citizens by virtue of having Irish-born parents. Applications to this elite group rose 81 percent from 8,331 in the first half of 2016 to 15,091 in the second half. If voting with your passport is a measure of attitudes, then Brexit isn't nearly so popular as people seem to think.

Read more: Tory "ashamed to be British" gets Irish passport

The development that many observers find particularly droll is the site of so many ardent Ulster unionists, including even Ian Paisley Junior himself, encouraging fellow unionists to sign up for a harp covered passport. Apparently longstanding and even hostile political pieties can take a back seat when other sobering considerations like restrictions on travel or property ownership in Europe come into play, including employment opportunities for their own children.

Having voted for Brexit, it’s been instructive to see just how quickly they can set aside their own political leanings to avail of the benefits of an Irish passport.  And if those longstanding barriers can be dismantled or built to accommodate the flow of cash to jurisdictions, what others might be dismantled after them?

The outbreak of ass-covering north of the border reminds us that the Brexit follies are best seen from Belfast, where the eye-watering Democratic Unionist Party payday has showcased just how much one part of the U.K. can extort from another when the chips are down, a lesson that has yet to play out karmically in real time.

The percentage of applicants seeking advantage when the borders close is still to be determined. Irish government sources insist only a small percentage want to cover their bases in cynical ploy to ease the restrictions they would otherwise face. But do you really believe that thousands of unionists are suddenly and inexplicably interested in their Irish heritage?

One thing is for certain: we will soon have a glut of new countrymen and countrywomen joining us under the Tricolor, many of whom will be as surprised to see themselves become Irish citizens as we will.

Of course that's not a bad thing in and of itself, but it would be edifying to know they had joined us for a better or more elevated reason than skipping through passport controls on the continent or to place a bid on a Spanish villa.