Biden is right - Russia’s actions in Ukraine are genocide 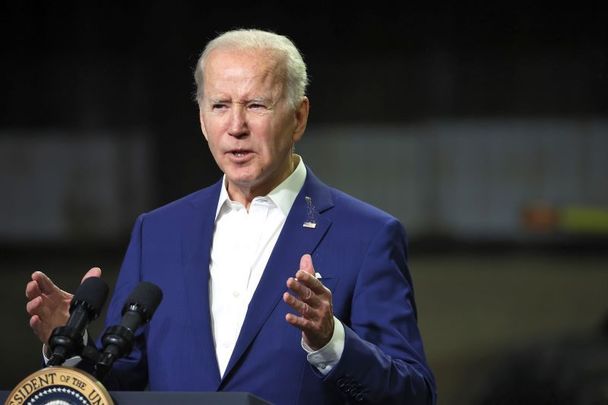 April 12, 2022: US President Joe Biden speaks to guests during a visit to POET Bioprocessing in Menlo, Iowa. Getty Images

President Biden has gone where no president has gone before, labeling the mass murder of the Armenians by the Turks as genocide and now doing the same by labeling what the Russians are doing to civilian Ukrainians as genocide.

Those are bold steps by our president and they cut through the palaver as to what is the actual definition of genocide. We know it when we see it.

The shelling of hospitals, the bombing of schools, the massive number of summary executions, many of the victims with hands tied behind their backs, the mass graves. All of this defies any other description.

Then there is the mass raping of women by the Russians, the missile attacks on train stations crowded with refugees, almost all women and children, and the alleged use of forbidden weaponry.

Clearly, the instructions are from the very top to spare no one, to bomb the cancer hospitals and children’s wards, to inflict massive pain and suffering on the least able to help themselves and therefore the most vulnerable.

And all this evidence is before we learn what unspeakable atrocities have been visited on the civilian population of Mariupol where hundreds of thousands have been deliberately prevented from leaving by the Russians.

Actually, Article Two of the Genocide Convention makes crystal clear what is happening in Ukraine. Decide for yourself if the following things are happening:

A mental element, the "intent to destroy, in whole or in part, a national, ethnical, racial or religious group, as such.

And a physical element, which includes the following five acts, enumerated exhaustively: Killing members of the group; causing serious bodily or mental harm to members of the group; deliberately inflicting on the group conditions of life calculated to bring about its physical destruction in whole or in part; imposing measures intended to prevent births within the group; forcibly transferring children of the group to another group.

Every one of those criteria is undoubtedly met in Ukraine today. Ukrainians are being killed indiscriminately.

Serious mental and bodily harm has been used to terrify millions. Entire cities and towns have been blasted to kingdom come with no concern for civilians. Mothers and children have been forced to flee in their millions while the men stay and fight. Children have been taken to filtration camps within Russia, all in violation of international laws.

Yet despite all this, mealy-mouth platitudes continue as to whether genocide or war crimes have been committed as if there was any doubt about those. The evidence is enough for Biden.

"Yes, I called it genocide, we will let the international lawyers decide...but it sure looks like genocide to me," he said.

President Biden stood by his earlier comments on Tuesday when he referred to Russia's invasion in Ukraine as "genocide" for the first time.

"Putin is just trying to wipe out the idea of being able to be Ukrainian," he said. pic.twitter.com/Ep4jHhX8iJ

Charles Trevelyan, the British civil servant who helped create the Irish Famine more than any other figure in history, would feel right at home justifying the Russian genocide. He stated, “The real evil with which we have to contend is not the physical evil of the Famine but the moral evil of the selfish, perverse and turbulent character of the people.” For Trevelyan, substitute Putin talking about Nazi states and murderous Ukrainians.

The counterargument was put simply and plainly by Samantha Power, the Irish-born head of USAID and an expert in genocide. She has no doubt what the Russians are perpetrating. “What we see with our own eyes is Russia intentionally trying to wipe out Ukrainians because they are Ukrainians,” Power said.

She is right. It is time to call the Russian invasion of Ukraine what it is – genocide.

*This editorial first appeared in the April 20 edition of the weekly Irish Voice newspaper, sister publication to IrishCentral.