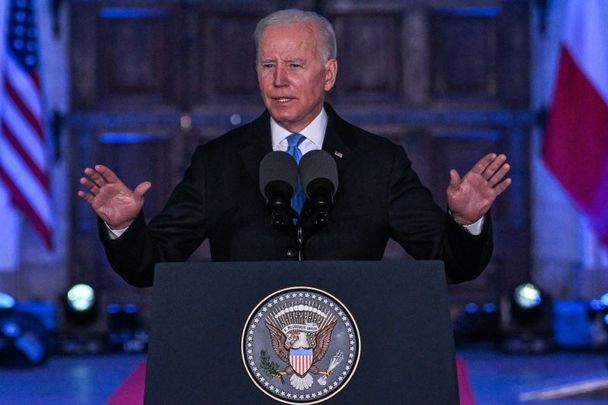 March 26, 2022: US President Joe Biden delivers a speech at the Royal Castle in Warsaw, Poland. In Poland yesterday, Biden met with the Polish president as well as US troops stationed near the Ukrainian border, bolstering NATO's eastern flank. Getty Images

President Biden has been doing a remarkable job seeking to keep the world safe from the demented despot Vladimir Putin.

We should not forget that Biden inherited a NATO ripped to shreds by his predecessor Donald Trump, who wanted to quit NATO and get on with his true agenda, bootlicking the deranged Putin who runs Russia.

The most laughable claim by Biden opponents, that Putin would never have begun hostilities if Trump were in the White House, misses the entire point that Putin was merely waiting to see whether Trump would do him the favor of dismantling NATO before he started his assault on Ukraine.

Trump was hopelessly compromised by his desire to suck up to Putin. The former president brought two Russian leaders, the foreign minister and the country’s U.S. ambassador, into the very sanctum of the Oval Office and showed them classified documents in an act resonant of treason.

Trump is also the man who publicly stated he would believe Putin over his own intelligence services when it came to interference in American elections. How Putin must have laughed privately at that kind of gullibility, and foolishness.

Trump has shown himself to be most at home in the company of deranged despots like North Korea’s Kim Jong-un and Putin. His ham-handed diplomacy on North Korea had its predictable impact – none – as Kim’s latest launch was his most powerful nuclear-armed missile test yet. Remember, this is the man Trump publicly expressed his love for.

On Ukraine, Trump is the man who withheld arming Ukraine until the country’s new leader, Volodymyr Zelenskyy, agreed to announce an investigation into Hunter Biden’s business dealings. Trump had his henchman Rudy Giuliani seek to bully and threaten the Ukrainian leader if he didn't do his bidding.

Those facts are indisputable and point to the reality that Putin would be halfway through Poland now with NATO utterly demoralized and sidelined if Trump were still in power. Trump was being played for a fool by Putin, and he went along like an obedient servant with everything the Russian leader wanted him to do.

With Trump in power, Putin would never have stopped at Ukraine given what we know now about his messianic mission to recreate the old Russian imperial empire which would have involved retaking all the old communist satellites such as Poland and Romania, with Trump going along for the ride.

There is a maniac let loose on the world, one with nuclear weapons, and we can be grateful indeed that it is Biden, and not the hapless Trump, who is leading the opposition.

Biden has been waiting to meet this moment all his political life. There is no one more seasoned, more knowledgeable about the ramifications of this crisis than our current president.

His speed in building NATO, his strategy to arm the Ukrainians as fast as possible, and, above all, to let Putin know he will be met with steel if he attacks a NATO country, has been a master class in powerful leadership.

While the GOP can waste its time looking for a transgender kid to harass or defending their fanatical previous love for Putin, Biden can go about saving the world.

In that respect, his trip to Warsaw, to a country overrun by Russia and Hitler within living memory, was deeply symbolic. In his remarkable speech after meeting with refugees, our president drew his line in the sand. Let Putin dare cross it.

*This editorial first appeared in the March 30 edition of the weekly Irish Voice newspaper, sister publication to IrishCentral.