When it comes to migration in the US, most people just pick the reality that sounds comforting to them. 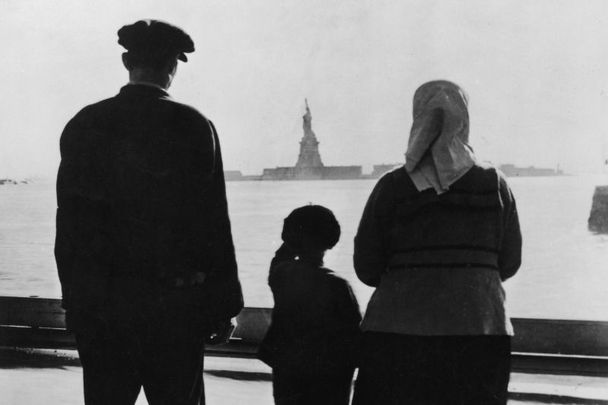 Rear view of an immigrant family on Ellis Island looking across New York Harbor at the Statue of Liberty, 1930s. Getty Images

About a week ago, a New York Daily News reader – with an Irish name, it’s worth noting – tapped out a message to the newspaper’s famous “Voice of the People” section.

Gene O’Brien, from Queens, wrote to alert readers about a wonderful place. A kind of Fantasy Island that sounds, frankly, like a great place to visit during these cold January days when Americans are once again fighting with each other over immigration.

“So, President Joey Biden is finally going down to the border to assess the situation,” O’Brien writes.

“I’m sure that when (Biden) gets there, it’s gonna look like Ellis Island. I’m sure they will have it all cleaned up and make it look like a well-oiled machine.”

Isn’t it interesting what people assume about the good old days?

There was once a time when the last thing anyone would think of when it came to “clean” was Ellis Island.

Take, for example, the people who were at the famous New York immigration depot every day.

“I had never seen such concentrated human sorrow and suffering as I saw at Ellis Island,” recalled Henry Curran, who once ran the place as commissioner.

A 1909 letter in the Jewish Daily Forward read, “We are packed into a room where there is space for about 200 people, but they have crammed in about a thousand…we lie on the floor in spittle and filth.”

In other words – the more the merrier!

Everyone remembers lassie Annie Moore and her rosy cheeks from Co Cork as the first to arrive at Ellis Island on New Year's Day in 1892. People tend not to know that, just a few weeks later, inspectors reported that scores of immigrants were arriving riddled with lice, only to wave them on into New York anyway!

All of this came to mind when I read about another raging history debate.

“As the number of (TV) shows and movies that depict real events has grown in recent years – never before have dramatizations of well-known people and events been so popular and prevalent – so, too, have the liberties that screenwriters are taking with the facts,” The New York Times wrote in a front-page story.

“In many instances, these are not mere embellishments for dramatic flair but major fabrications. Some of the people who claim they’ve been reduced to crude caricatures onscreen are suing for defamation.”

And so “the millions of people who watched three of the most popular historical dramas of the last year – 'The Crown' and 'Monster: The Jeffrey Dahmer Story' on Netflix and HBO’s 'Winning Time: The Rise of the Lakers Dynasty' – were left to separate fact from fiction on their own.”

And so most people just pick the reality that sounds comforting to them.

At one level this is a shame. I never quite understood the idea that a person’s life is so interesting that it deserves to be told on the big screen, only to then be convinced that this true story would be even more interesting if some fake stuff were added.

Then again, such things did not begin with "The Crown." They began with the “savages” who oppressed all those cute cowboys in Western movies – and before that, books.

And do things really change? Now we have the hit "Yellowstone," a TV show about cowboys who grabbed up native lands, and now complain for hours on end…about how their land is being stolen from them!

The bigger problem here – which has confused people about Irish immigrants, in particular – is that movie and TV producers like to tell stories with very, very obvious good guys and bad guys.

So we get movies – soon to be a TV show – like "Gangs of New York." About poor, noble Irish immigrants, struggling for the American Dream. The good guys.

So long as they don’t become violent, racist rioters. You know, bad guys.

Even if they’re the same guy.