How much of what we know about Irish woman Annie Moore, the first immigrant to arrive at Ellis Island, is myth, and how much is true? 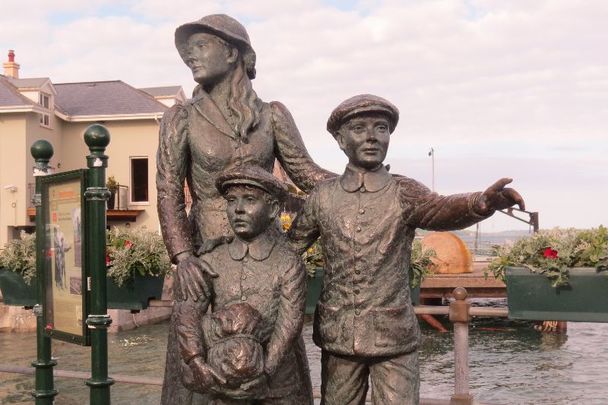 The true story of the first immigrant to be processed at Ellis Island may be very different from previous historical accounts. Ireland's Content Pool

It is a difficult question for many an Irish American: were your people lace curtain or shanty?

Both derogatory adjectives in their own right, did your ancestors make their way up the ladder on arrival to the US (or at least maintain the appearance that they did) and become one of the "lace curtain Irish" or did they not fare quite as well, were they among the less fortunate of their countrymen, whose life of poverty continued on reaching the Land of the Free as the "shanty Irish."

The question is all the more heartbreaking because, and here is Irish logic at its finest, being "lace curtain" can be as much a source of shame or embarrassment as being dubbed “shanty.”

But when such a question is asked about an unqualified Irish-American heroine, well, it makes you start thinking that maybe we should be careful when we look into our past, because you never know what you’re going to find.

For decades, “rosy-cheeked” Annie Moore from Co. Cork was celebrated as the first immigrant to enter America through Ellis Island, back when the famous processing facility was opened in 1892.

Annie went on to become a "perfect" Irish-American, with honorable emphasis on both sides of the hyphen. According to family lore, she struck out for the western territories and married a descendant of the great liberator Daniel O’Connell in Texas, before dying young in 1919, the victim of a streetcar accident.

In recent years, however, the Annie Moore myth has unraveled. In New York magazine in 2010, journalist Jesse Green took a long, sometimes painful look back at the “real” Annie Moore, who, it turns out, never left the Lower East Side of Manhattan.

The new phase of Annie Moore’s seemingly endless journey begins with genealogist Megan Smolenyak Smolenyak, who began chipping away at the inconsistencies and inaccuracies of the Annie Moore myth between 2002 and 2006.

Several people in New York who vocally claimed to be descendants of the Lower East Side, where  Annie had died, and so Smolenyak Smolenyak took to her blog and offered a $1,000 reward to anyone who could lead her to the “real” Annie Moore.

The search led Smolenyak Smolenyak to Manhattan’s old Fourth Ward, the same tough streets which produced Al Smith, the four-time Governor of New York and 1928 Democratic US Presidential candidate, who grew up on Oliver Street.

If Smith would go on to run for president, and the “fake” Annie Moore would gain immortality in history books and on collectible teacups, the real Annie Moore was notable for how swiftly she was forgotten by the throngs which greeted her when she arrived in Ellis Island on New Year’s Day, 1892.

Annie’s was not an easy life. She married a German who worked at the nearby Fulton Fish Market, the same place from which Al Smith often quipped he earned his five-factor model (big five personality traits) degree.

“She had spent nearly every year of her marriage pregnant with, giving birth to, or burying a child,” Green wrote.

“In an age when the average life expectancy for white Americans was 47, and surely lower in the slums, Annie would have expected some children to die.”

At one point in the article, Green explained to Annie’s great-niece the disease which felled the children. She broke down in tears.

“I hear that list and I think of 'Angela’s Ashes.' I don’t want Annie to be an Angela!” she says.

“I think the Irish brought that kind of hard life with them. It has to do with the British presence. If you can have national low self-esteem and at the same time be very arrogant, that was Ireland.”

You can quibble with the sociology of this statement, but not the emotion. Annie Moore clearly remains an important symbol of the Irish past in America, and it matters, though it shouldn’t, if that past was plucky or downtrodden. Lace curtain or shanty.

But if Annie is a symbol of the New York Irish past, she is also a symbol of the American present. Do we need still need to construct myths around today’s immigrants? Do we need to gloss over the struggles that some Irish immigrants to the US may be facing and continue portraying the perfect image of American life and success back home?

Or can we take the Annie Moores of today for what they are: struggling, striving, hard-working parents of future Americans. (Annie’s offspring now includes “Dominicans, Chinese, Jews and Italians,” according to the New Yorker.)

Or will we decide not to take today’s Annie Moores in any way, shape or form?

Have you any thoughts on the way Irish immigrants have been portrayed in the past or how they are presently portrayed?