Ukrainian President Zelenskyy is set to participate in a Q&A after his live stream address to Ireland's third-level students on November 18. 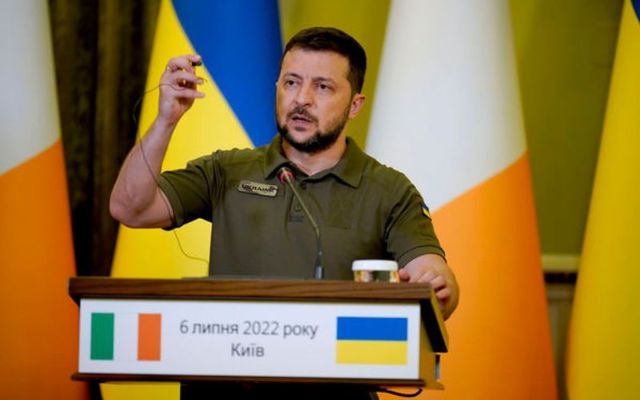 Volodymyr Zelenskyy, the President of Ukraine, will virtually address all third-level students in Ireland on Friday, November 18.

Zelenskyy's live address will be hosted by Dublin City University (DCU) and will be attended by Government Ministers, dignitaries, and students.

The Ukrainian President's address will be live-streamed to other third-level institutions in Ireland.

Students will have the opportunity to take part in a Q&A session with the Ukrainian President following his speech.

Simon Harris, Ireland's Minister for Further and Higher Education, said on November 1: “President Zelenskyy will address our third-level students, and will hear from a man who has stood defiantly in the face of an illegal and barbaric invasion of his country.

“We have welcomed hundreds of Ukrainian students into our colleges, and this will be an opportunity for them to hear directly from their President.

“Throughout history, Ireland has also had a long tradition of supporting other nations in times of trouble. This has posed great challenges for many of us.

“President Zelenskyy has offered to speak directly to our students about their concerns or any questions they may have, and I know they will benefit greatly from hearing first-hand from the frontline.”

Larysa Gerasko, Ukraine's Ambassador to Ireland, said: “The address by President of Ukraine, Volodymyr Zelenskyy is a great opportunity to for the students of Irish universities to hear first-hand information about Russian aggression against Ukraine, it's hybrid warfare, and disinformation campaigns that have already impacted Europe.

"We must do everything to spread the truth and to hold Russia accountable for the atrocities and crimes committed in Ukraine."

Zelenskyy previously addressed the Dáil in April, communicating with TDs via a translator.

The Ukrainian President paid tribute to Ireland's response to the Russian invasion of Ukraine, adding that Ireland had "not remained neutral" to the invasion.

"Even though you are a neutral country, you have not remained neutral to the disaster and mishaps Russia has brought to Ukraine," Zelenskyy told TDs in April.

"I am grateful to you. To every citizen in Ireland, thank you for supporting sanctions against Russia."

Zelenskyy also thanked the Irish people for the humanitarian aid that they sent to Ukraine following the invasion.